The secular and ultra-Orthodox are embroiled once again in a conflict over control at an educational institution – in Arad this time, at the city's Shuvu School. A separation fence erected at the school a few days ago is now keeping the two camps apart.

On Sunday, following a violent incident on the secular side of the school, the secular residents decided to launch a campaign against the haredization of the city. "We don't want to be like Beit Shemesh," they say.

A Be'er Sheva court was expected to issue a ruling on Tuesday with regard to the fate of the fence; meanwhile police cars are on patrol around the school to prevent any clashes. 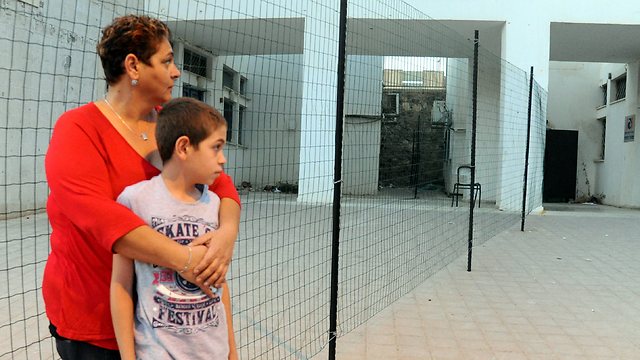 The Shuvu School was shut down last year due to a shortage of pupils, and the city subsequently decided to divide the institution into two parts – one for the Hasidim living in the city, and the other for use in the afternoons by secular children for extra lessons. During the course of the afternoon program, the pupils receive two hot meals, do homework with the assistance of young women on National Service, and play games – until their parents return from work in the evening.

Prior to Sunday, these activities took place at a different location in the city; but during the Sukkot break, the municipality renovated one of the structures at the school for the secular pupils, and a ceremony to dedicate the new building was scheduled to take place on Monday.

On Sunday, however, the Hasidim broke into the renovated building and took control of it. Four National Service girls who were there at the time to ready the new place for the children were assaulted and forced out, with the Hasidim yelling at them that they aren't Jewish.

"The girls were in shock," said Anita Rosenbaum, a resident of the city. "They had a terrible experience and I don't think they'll be coming back at all."

Anita's son, Bar, 12, was also attacked a few days when he went to the new building. "Many men surrounded me; they shouted at me that I'm not a Jew and picked up stones to throw at me and told me to get out of there," Bar said. "I ran home and told my mother what had happened and I told her I wasn't going to come back here."

Zehava Ben-David said her 13-year-old daughter felt the same. "My daughter doesn't want to come here," Ben-David commented. "She's scared, and I'm not going to send her here. It's now become the fight of all Arad residents.

Haredization is a far greater evil than the wave of layoffs in the city."

On Sunday night, secular residents showed up at the school and clashes broke out at the location with Hasidim who cut through the fence separating the two parts of the school and held up in the area intended for the secular children. A large police force was called in to disperse the crowd. In keeping with a court order issued Monday night, the school is now closed and both sides are barred from entering the location pending Tuesday's court ruling.

According to a statement from the Arad Municipality, the fence was installed because the site in question constitutes two separate educational institutions each of which has its own playground.