Permerga forces on border with Syria

ISIS jihadists killed at least 30 pro-regime gunmen in an attack on an oil and gas field in Syria, a monitoring group said Wednesday, as a group of Iraqi Kurdish peshmerga troops arrived in Turkey early Wednesday on their way to Syria to help their Syrian Kurdish brethren fight ISIS extremists in the embattled border town of Kobani. A small group of Syrian rebels have also entered Kobani to help Kurdish fighters.

"ISIS managed to control parts of the field," the Syrian Observatory for Human Rights, which relies on a wide network of sources in the war-torn country, said after Tuesday's attack at Shaer, in Homs province. 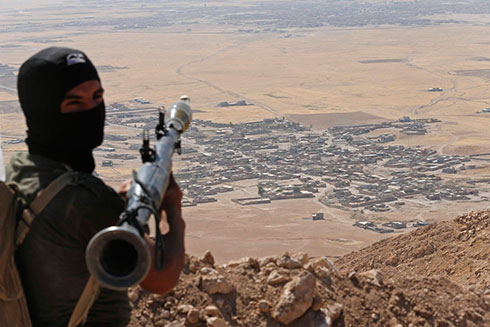 A group of around 50 armed fighters is from the Free Syrian Army, an umbrella group of mainstream rebels fighting to topple Syrian President Bashar Assad, joined Kurds in Kobani Wednesday.

Idriss Nassan, a Kurdish official from Kobani, said the group crossed to Kobani through the Mursitpinar border crossing with Turkey.

Their arrival early on Wednesday came several hours after a group of Iraqi Kurdish peshmerga troops arrived in Turkey, also on their way to Syria to help their Syrian Kurdish brethren fight IS militants.

The unprecedented Kurdish mission by the 150 fighters came after Ankara agreed to allow the peshmerga troops to cross into Syria via Turkey - although the Turkish prime minister reiterated that his country would not be sending any ground forces of its own to Kobani, along the Syrian-Turkish border.

After a rousing send-off from thousands of cheering, flag-waving supporters in the Iraqi Kurdish capital of Irbil, the peshmerga forces landed early Wednesday at the Sanliurfa airport in southeastern Turkey. They left the airport in buses escorted by Turkish security forces and were expected to travel to Kobani through the Mursitpinar border crossing with Syria.

Turkish Prime Minister Ahmet Davutoglu told the BBC that sending the peshmerga was "the only way to help Kobani, since other countries don't want to use ground troops."

ISIS launched its offensive on Kobani and nearby Syrian villages in mid-September, killing more than 800 people, according to activists. The Sunni extremists captured dozens of Kurdish villages around Kobani and control parts of the town. More than 200,000 people have fled across the border into Turkey.

The US is leading a coalition that has carried out dozens of airstrikes targeting the militants in and around Kobani.

The deployment of the 150 peshmerga fighters, who were authorized by the Iraqi Kurdish government to go to Kobani, underscores the sensitive political tensions in the region.

Turkey's government views the Syrian Kurds defending Kobani as loyal to what Ankara regards as an extension of the Kurdistan Workers' Party, or PKK. That group has waged a 30-year insurgency in Turkey and is designated a terrorist group by the US and NATO.

Under pressure to take greater action against the IS militants - from the West as well as from Kurds inside Turkey and Syria - the Turkish government agreed to let the fighters cross through its territory. But it only is allowing the peshmerga forces from Iraq, with whom it has a good relationship, and not those from the PKK. A separate Iraqi Kurdish peshmerga convoy of Toyota Land Cruisers and trucks carrying cannons and machine guns crossed into Turkey early Wednesday at the Ibrahim Khalil border crossing at Zakho in northern Iraq. The land convoy and the 150 fighters were expected to join up and cross jointly into Syria. Peshmerga soldiers carrying Kurdish flags were atop some of the vehicles as they headed from Irbil to the Iraqi-Turkish border crossing. The troops made the victory sign for the cameras. An ambulance and government vehicles blaring their sirens accompanied the convoy. Scores of people waited by the side of the road in villages for the troops to pass. Thousands of people awaited them at the border. The crowd sang and chanted traditional peshmerga songs and had to be pushed back by every vehicle that tried to make its way through the masses. Many people carried colorful Kurdish flags and portraits of the Iraqi Kurdish regional President Massoud Barzani. The Kurds of Syria and Iraq have become a major focus in the war against ISIS, with Kurdish populations in both countries under significant threat by the militant group's lightning advance as it seeks to establish an Islamic caliphate in the region. The Iraqi Kurdish parliament voted overwhelmingly to send fighters to Kobani, underscoring the growing cooperation among the Kurds in Iraq and Syria. The action marked the first mission for the peshmerga outside Iraq. US State Department spokeswoman Jen Psaki said US officials "certainly encourage" the deployment of Iraqi peshmerga forces to Kobani.

It will provide much-needed support for the Syrian Kurds, although it is not clear whether Turkey will allow the peshmerga fighters to carry enough weaponry to make an impact.

On Tuesday, the US Central Command said US military forces carried out four airstrikes near Kobani in the past 24 hours, destroying four IS fighting positions and a small IS unit. In Berlin on Tuesday, Syria's neighbors urged European countries at a conference of foreign ministers and representatives from 40 nations to open their doors to more refugees, and for immediate financial and technological help as their infrastructures buckle under the massive influx of civilians fleeing the conflict. Turkey has agreed to train and equip moderate Syrian rebel forces that have for more than three years sought to oust Syrian President Bashar Assad.

More than 3 million people have fled Syria because of the conflict, mostly to neighboring countries. Another 6 million are displaced within Syria.

The conflict began with largely peaceful protests in March 2011 calling for reform. It eventually spiraled into a civil war as people took up arms following a brutal military crackdown on the protest movement.

Islamic extremists, including foreign fighters, have joined the war, playing an increasingly prominent role in the conflict. Thousands have died in battles between opposing rebel groups since the beginning of the year.