Device can display video images relayed by all IDF cameras on land, in the air and at sea, even in areas without reception.

The Israel Defense Forces is currently completing development of a heavy-duty personal tablet for its field commanders. Equipped with a seven-inch screen, the tablet will be able to broadcast direct video feeds from various cameras in the commander's sector, thereby providing him with a live picture of events in the field.

The device will also serve to send and receive additional vital informational from out in the field. The commander can either carry the tablet on his person, usually strapped to the thigh, or place it in a readily accessible pouch in the backpack of his communications officer.

The tablet has yet to pass through its baptism of fire, but its designers, from the Center of Encryption and Information Safety at the IDF's Computer Services Directorate, did work on their latest software updates with combat soldiers during the course of Operation Protective Edge. 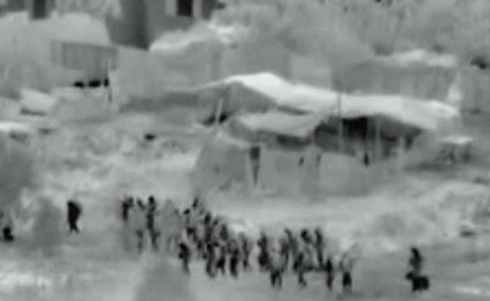 The IDF transmitted real-time images of the ground entry into Gaza in July (Photo: AP)

The tablet, based on a system developed by American company CTI, has the capacity to display video images relayed by all the relevant IDF cameras in the sector – on land, in the air and at sea. Currently, when a company commander out in his jeep receives an alert about an incident along the border fence, he has to maintain radio contact with all of the lookout stations in an effort to get a complete picture of the situation; this takes time and can lead to misunderstandings and errors. With the tablet, however, he can simply hook up to the live feed – relayed simultaneously to all the command elements – and see exactly what is happening on the ground right away.

This is a complex technical capability: The highly encrypted wireless transmission is carried along a high bandwidth, without delays anywhere along the line, even in areas in which there is no cellular network coverage.

The new tablet will be incorporated into the extensive system of surveillance and monitoring measures, known as Crystal Ball, employed by the IDF during Protective Edge. The system, which provides video coverage of a huge area at any given moment, has the ability to receive real-time video images from specific locations and then relay them to the appropriate forces as required. The video footage can come, for example, from drones and surveillance balloons in the sky, from vessel out at sea or near the coast, from fixed cameras, and even from a soldier's helmet-mounted camera.

Crystal Ball is unique in that it gathers and consolidates all the video footage collected by the various IDF entities into a single, standardized system that is fully accessible to commanders at various levels, in keeping with operational needs. Thus, the system's controllers function somewhat like directors in a television studio who view footage coming in from a number of cameras and need to decide at any given moment which camera to use to display the images that are broadcast to the viewers.

The system's senior commander is faced with a map on which appear the various cameras and the angles they cover; and with one click, he can bring up a live feed from a specific camera and relay the live images to the forces in the field. He decides who receives which feed. One click gives you live images from an Israel Navy ship off the coast of Gaza, and another click gives you the perspective from a camera on the beach.

The beach landing by terrorists near Kibbutz Zikim during Operation Protective Edge offered a good example of the system's capabilities. The IDF lookout spotted the infiltration, and the images were immediately fed into the Crystal Ball system. Helicopters were scrambled to the area, and the live images were relayed to the pilots too. The circle closed quickly and the response was swift.

The IDF's Computer Services Directorate has also developed a satellite transceiver designed to facilitate communication in areas where wireless communication is impossible. The system – which can be turned into a fully-fledged communications unit, complete with an antenna and broadcast dish, within minutes – is portable and can be carried by two soldiers.

The transceiver serves in essence as a relay station, creating a network accessible from the soldiers' radios and communications devices. The data is carried by satellite. The idea behind the development is that if one of the communication systems crashes, there will always be another one to facilitate the functioning of the data and command and control systems.