The Knesset approved Tuesday a law limiting early release for prisoners who have been convicted of particularly severe counts of murder. The government would not be able to approve their early release until they've served at least 15 years in prison.

The bill, proposed by MK Ayelet Shaked (Bayit Yehudi) and other MKs, is mostly aimed at stopping future releases of Palestininians convicted of terror charges in prisoner swaps or goodwill gestures.

According to the new law, the special paroles board will only be able to consider such cases after at least 15 years of the sentence have passed, and will not be able to recommend commuting of such prisoner's sentence to less than 40 years.

The legislation - which refers to both security and criminal prisoners - will not be retroactive, but stipulates that the law will apply to those who have yet to be sentenced, on condition the court allows the two sides to plead their case on the matter. 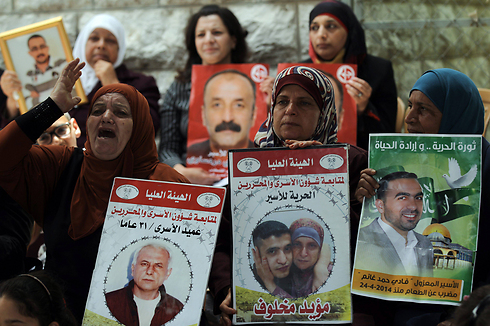 Palestinian women protest the detention of prisoners. (Photo: EPA)
Additionally, the law states that the government will not have the authority to approve early release of prisoners in the event of a prisoner swap deal, such as the Shalit deal that saw the release of over 1,000 prisoners in exchange for kidnapped IDF soldier Gilat Shalit. However, the legislation does not negate the president's authority to grant pardons.

Following the law's approval, Shaked stated that "this law can ensure that abhorrent murderers, such as those who killed the Fogel family" - referring to the 2011 incident in which five members of a Jewish family were slaughtered in their home - "will not be released in the future. I very much hope that there will be no need for this law, but history teaches us that there will be."

MK Shuli Moalem-Refaeli (Bayit Yehudi), who presented the law on the behalf of the Constitution, Law, and Justice Committee, said that "the goal of the law is to ensure that prisoners who have committed a particularly heinous crime cannot be released prematurely by the government." 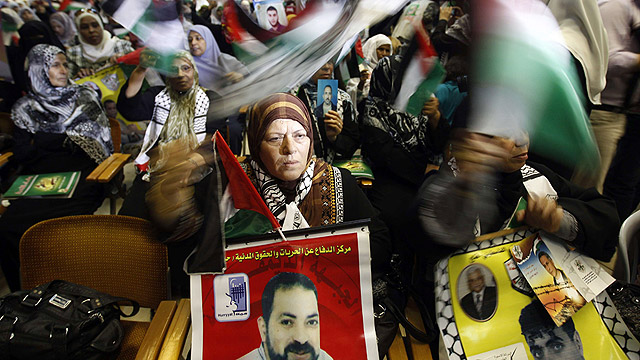 In 2012, Palestinians marked the anniversary of the Shalit prisoner swap. (Photo: AFP)

MK Esawi Frij (Meretz) attacked the new law: "You can present the law however you want, but this law has only one goal – to put a spoke in the wheels of any future peace process," he said. "You can try to resist it, but there will be a political solution, and there will be no political solution without the release of prisoners. All this will be thrown in the trash."

MK Dov Hanin (Hadash) remarked that "it's an extraordinary thing for the government to support a measure that ties its own hands. Without releasing prisoners, wars can't be ended."