US: Kerry won't unveil peace plan in talks with Palestinians

Presenting a peace plan in secretary of state's meeting with Palestinian negotiator would be unproductive, State Dept. spokeswoman says; 'It's up to the parties to take steps.'

Top US diplomat John Kerry on Monday was to meet the chief Palestinian negotiator but would not unveil an American peace plan, an official said, adding such a move would be unproductive.

"There are no current plans to introduce a peace plan," State Department spokeswoman Jen Psaki said, dismissing reports that proposals would be laid on the table during Kerry's meeting with Saeb Erakat in Washington.

Kerry's bid to broker a peace deal between Israel and the Palestinians ended in failure earlier this year, leaving bitter recriminations on both sides. 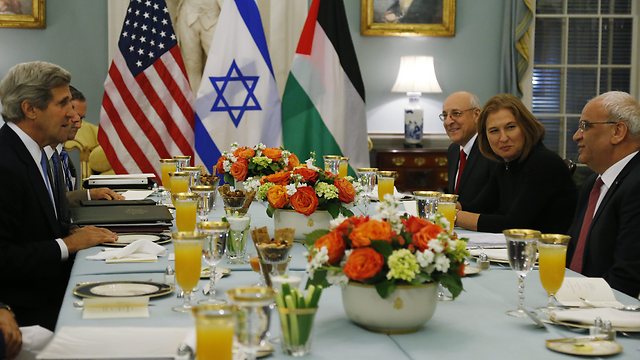 The opening of the previous round of peace talks, that fell apart in April (Photo: AP)

US officials have insisted progress was made during some nine months of intense shuttle diplomacy, but have resisted calls to formulate Washington's own peace plan as a means of bringing the two sides back to the negotiating table.

"It's up to the parties to take steps," Psaki said.

"We know what the issues are, we know what the conditions would be, but it's up to them. So we're only going to take steps that we think would be productive."

The office of Prime Minister Benjamin Netanyahu last week said it would build more than 1,000 new settler homes in the part of the holy city captured in the 1967 Six-Day War.

"It would be unfortunate" if after "the unequivocal and unanimous" opposition of the US and international community "Israeli authorities would actively seek to move these plans forward," Psaki said.

She insisted the United States would be "willing to be a capable partner" if there was a move to resume negotiations, but said there was no current "evidence of that."

On the part of Israel, Psaki said: "If they were going to restart a peace negotiation, we would be seeing actions and we'd be seeing efforts on their part to do that."

A senior Palestinian official said at the weekend Washington was seeking to dissuade the Palestinians from pursuing further claims to statehood at the United Nations.

To that end Kerry was planning to put forward some proposals on the way forward, the Palestinian official said, asking not to be named.

Psaki said Kerry spoke with Netanyahu over the weekend as well as with Jordanian Foreign Minister Nasser Judeh.

She added that Kerry and Erakat would look at ways to lower tensions in East Jerusalem after a series of clashes and attacks in recent weeks.