Thousands of Iranians chant 'down with America,' rally comes day before meeting between US and Iran on nuclear program.

Thousands of Iranians chanted "Down with America" at a major anti-US rally on Tuesday marking the anniversary of the 1979 takeover of the US Embassy in Tehran, just days ahead of a key meeting between the two nations' top diplomats over Iran's controversial nuclear program.

The gathering outside the former embassy compound in Tehran, which has become the annual venue for rallies commemorating the embassy attack and other American-bashing protests, was smaller compared to last year's event, which drew tens of thousands - a sign of improved Iran-US relations since moderate Iranian President Hassan Rouhani took office last year. 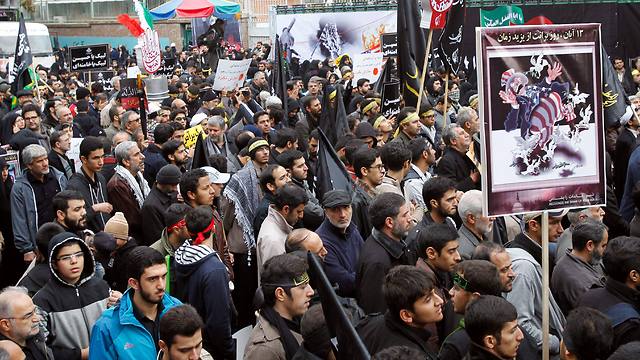 Anti-American signs at anniversary rally in Tehran (Photo: EPA)
But the rally, organized by hard-liners, still puts pressure on Rouhani, whose policy of outreach to Washington has faced harsh criticism from opponents at home.

Many in the crowd chanted "Death to Israel" and "Death to Britain," neither of which has an embassy in Iran. Several protesters burned the American, Israeli and the British flag. 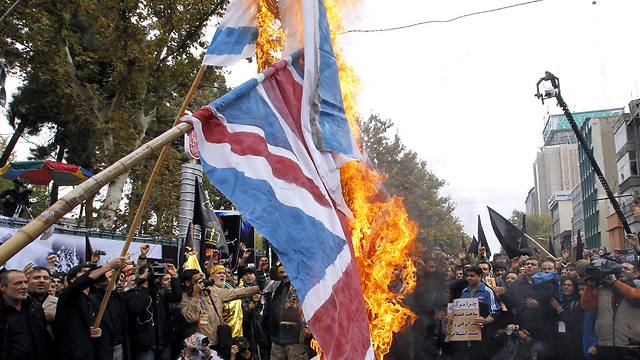 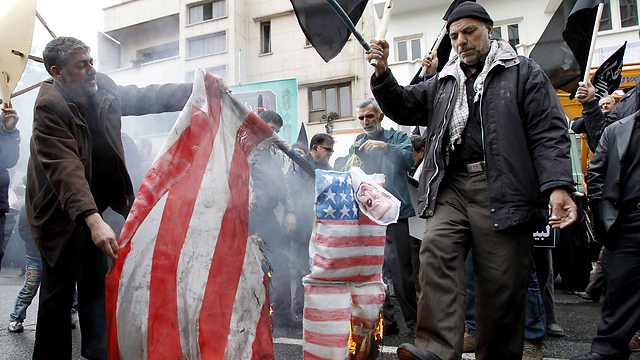 Photo: EPA
Following the Islamic Revolution in Iran 35 years ago, militant Iranian students stormed the US Embassy in 1979, claiming it was a center of plots against the Persian nation, and held 52 Americans hostage for 444 days. Ties between the two countries were severed after the siege and formal relations have not been restored since. The anti-US gathering this year also had a religious character as most Shiites world over bserved the Ashoura on Tuesday, a remembrance of the 7th-century death of Imam Hussein, a grandson of the Prophet Muhammad, revered by Shiites. 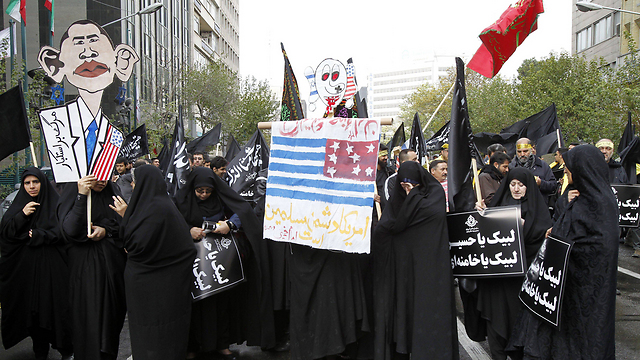 Photo: EPA
One of the rally speakers, cleric and university professor Ali Reza Panahian compared the US to enemies Hussein faced in his final battle in Karbala in present-day Iraq. "Today, the evil arrogant powers have learned that they should not attempt to thwart us in the same way that enemies of Hussein encircled him," Panahian said. He also denounced talks with world powers over Iran's nuclear program, claiming the negotiations cannot change the Iranians' anti-US stance. 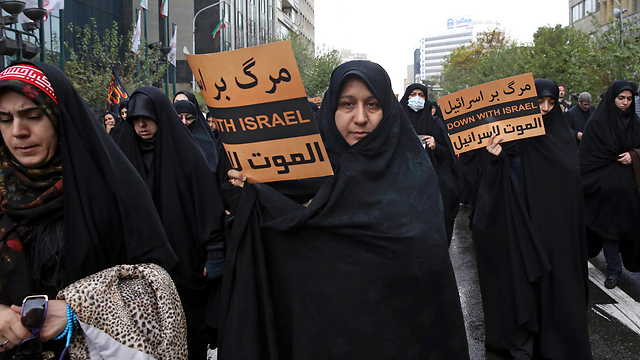 But despite anti-American sentiments on the streets, Rouhani's government has pushed for a final nuclear deal that would end crippling Western sanctions imposed on Iran in exchange for ensuring that Tehran cannot produce a nuclear weapon. 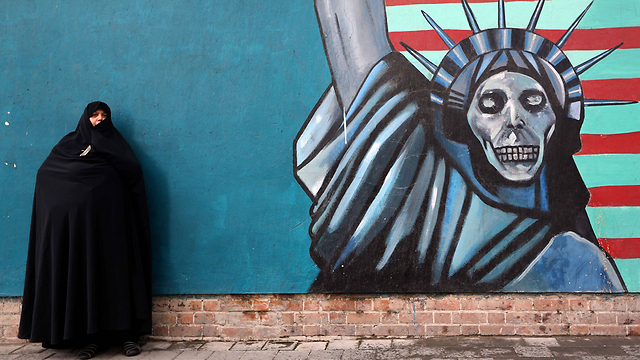 Photo: AFP
The two sides have a November 24th deadline to seal the final deal. The West suspects Iran's nuclear program is aimed at producing atomic weapons, a charge Tehran denies, insisting it's for peaceful purposes only.

Supreme Leader Ayatollah Ali Khamenei, who has final say on all Iranian state matters, has repeatedly backed the talks even though he has expressed doubts about the intentions of the six-member group - the five permanent UN Security Council members and Germany - in the negotiations. 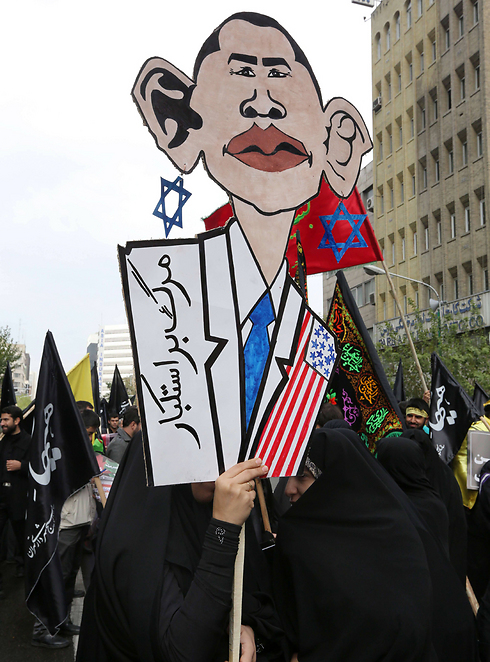 Photo: AFP
In Oman's capital of Muscat next week, US Secretary of State John Kerry and his Iranian counterpart Mohammad Javad Zarif are to hold trilateral talks, which will also include European Union's foreign policy chief Catherine Ashton. Zarif's adviser Ali Khorram said Iran-US relations have now changed from being openly hostile to friendly but that "it's a friendly relation not based on trust, not yet." Khorram said the two have "common fields of cooperation in Iraq and Syria" against Islamic State extremists