Report: Iran agrees to ship uranium to Russia as part of nuclear deal

According to officials quoted by the New York Times, Moscow would convert uranium to special fuel rods for Bushehr, which would make it difficult for Iran to use them to make a nuclear bomb.

Russia could play a significant role in the West's effort to stop Iran from becoming a nuclear threshold country after Tehran has reportedly agreed to ship much of its uranium to Moscow, officials and diplomats involved with nuclear negotiations told The New York Times in a story published on Tuesday.

The plan is contingent on the P5+1 nations (US, UK, France, China, Russia and Germany) reaching a long-term nuclear agreement with Iran in talks due to expire later this month.

According to the diplomats, the discussed solution to the impasse in talks over Tehran's 28,000 pounds of uranium is for Moscow to convert the uranium into specialized fuel rods to be used in Iran's Russian-built Bushehr nuclear power plant.

Once converted into fuel rods, the Times reported, it would be extremely difficult for Iran to use them to make a nuclear weapon. 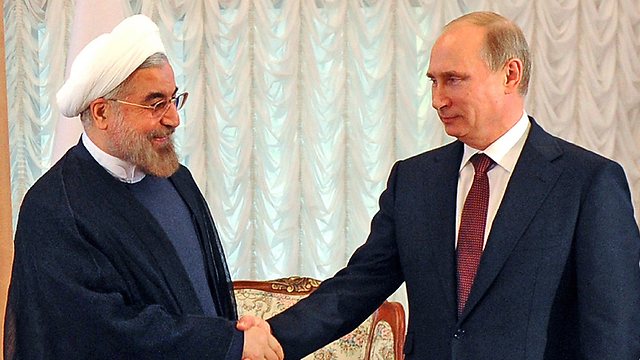 Iranian President Rouhani and Russian President Putin (Photo: AFP)
The agreement, however, does not address an alternative way for the Islamic Republic to obtain a nuclear bomb - the use of the heavy water produced at Iran's Arak plant to produce plutonium.   Despite that, an American official involved in the talks was optimistic about the proposed agreement, saying that "if the Iran-Russia deal works, it could be the cornerstone of something much larger." A US National Security official confirmed Russia's contribution to nuclear talks with Iran, saying Moscow "played a very helpful role during these negotiations," by working together with the other nations "to put forward creative and reasonable ideas that preserve our objective of cutting off any possible pathway Iran might have to a nuclear weapon." According to the Times, Russia has both financial and political incentives to agree to the proposed deal. On the financial benefits, the paper noted that Moscow "would be paid handsomely for enriching Iran’s uranium, continuing the monopoly it has in providing the Iranians with a commercial reactor, and putting it in a good position to build the new nuclear power reactors that Iran has said it intends to construct in the future."

Politically, "it also places President Vladimir Putin at the center of negotiations that may well determine the future of the Middle East, a position he is eager to occupy," according to the Times. 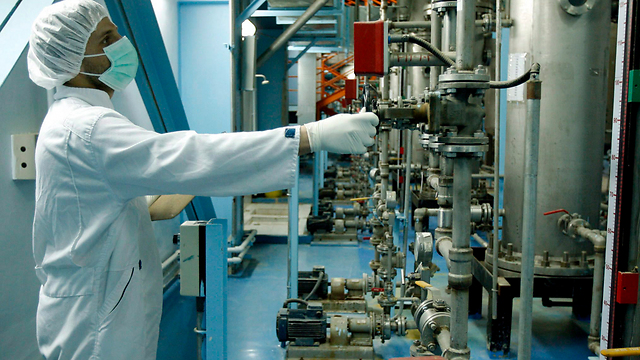 An Iranian technician at the uranium enrichment facility in Isfahan (Photo: EPA)
US Secretary of State John Kerry was scheduled to meet with Iran's Foreign Minister Mohammad Javad Zarid and the European Union's Foreign Policy Chief Catherine Ashton next week in Oman to discuss the Iranian nuclear issue, just two weeks before the November 24 deadline for the talks. According to the Times, one of the issues Kerry is expected to negotiate is the caps that would limit how much uranium Iran could keep. The high-level gathering is one of series of meetings in the final weeks before the deadline. Before heading to Oman Ashton will meet senior foreign ministry officials from the six powers in Vienna on November 7, Ashton's spokesman Michael Mann said. The six will then begin meeting again with the full Iranian delegation in Vienna on November 18, he added. EU coordinates the negotiations on behalf of the six powers. "The aim of the talks is to reach a comprehensive agreement with Iran by November 24, under which it would reassure the international community about the exclusively peaceful nature of its nuclear program," Mann said in a statement. Last week the top US negotiator in the Iran talks, Under-Secretary of State Wendy Sherman, said Iran will be widely seen as responsible if a comprehensive deal to curb its nuclear program is not reached. Both sides say they still aim to meet the November 24 deadline for a deal, despite doubts among many experts that they can reach an accord that would end a decade-old dispute over Tehran's nuclear program with just a few weeks remaining. Relations with the West have thawed since Hassan Rouhani was elected president last year seeking to end Iran's international isolation, and the talks are aimed at easing concerns about Tehran's atomic activities in exchange for lifting economic sanctions. But Western officials say there are still differences in the positions of the two sides, especially over the future scope of Iran's uranium enrichment program, which can have civilian and military uses. The United States, France, Britain and Germany would like the number of enrichment centrifuges Iran maintains to be in the low thousands, while Tehran wants to keep tens of thousands in operation. It now has about 19,000 installed, of which about 10,000 are spinning to refine uranium. Iran and the six powers reached an interim deal last November under which Tehran received limited sanctions relief in exchange for halting the production of medium enriched uranium. That six-month accord took effect early this year and was extended by four months in July.