PLO statement claims 'Al-Aqsa Mosque compound is not a disputed territory and all other terms, therefore, are null and void.'

The Palestinians on Wednesday urged reporters and news outlets not to use the term Temple Mount when covering recent events in the complex which also houses the Al-Aqsa mosque.

A press release by the Palestinian Liberation Organization (PLO), dubbed "Concern over the use of the inaccurate term 'Temple Mount' to refer to Al-Aqsa Mosque Compound in Jerusalem" was sent out on Wednesday.

First reported by Matthew Kalman's blog, the statement called on the international media "to adhere to international law and correct any other existing terminology used. The Al-Aqsa Mosque compound is not a disputed territory and all other terms, therefore, are null and void." 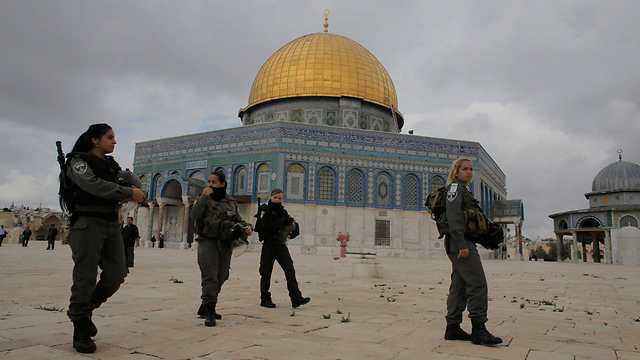 The Palestinians argue that "Al-Aqsa Mosque Compound is located in East Jerusalem, an internationally recognized part of the Occupied State of Palestine."

Israel's claim over East Jerusalem, the PLO goes on to say, is not recognized by the international community "in line with UN Security Council Resolution 478."

"This Resolution rejected the Israeli measure as a violation of the Fourth Geneva Convention and determined that: 'All legislative and administrative measures and actions taken by Israel, the occupying Power, which have altered or purport to alter the character and the status of the Holy City of Jerusalem, and in particular, the recent ‘basic law’ on Jerusalem, are null and void.'"

The PLO accuses the Israeli government of continuing "to incite against this sacred site, and consequently provoke Palestinian fears and anger.

"Israel, the occupying power, has failed at stopping settler extremists from entering the Mosque and this constitutes a violation of the Waqf’s custodianship and its obligation as an occupying power to maintain public order and civil life in the occupied territory."