In attempt to restore security to the residents of Jerusalem, thousands of policemen deployed and roadblocks placed in light rail stations; Bennett: Roadblocks are a reward for terrorism. Deterrence preferable to self-defense.

Over a thousand police officers were deployed to the streets of Jerusalem in the past week, but they were unable to restore security to the streets of the capital. Three terrorist attacks in two weeks, two along the light rail route, led to deserted stations on Thursday morning.

In the wake of the two recent terror attacks at the light rail and the rising tensions in the capital, it was decided to place concrete roadblocks at train stations to prevent run-over attacks. The light rail station on the French Hill was the first to receive the extra protection Wednesday overnight. 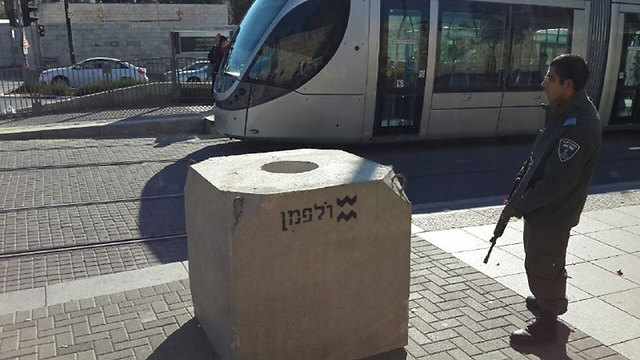 "Another attack can happen in different formats," Jerusalem District Police Commander Moshe Edri said. "We do see a significant decline in all rioting hotspots, but unfortunately we are experiencing a terror attack every week as part of the escalation in the area."

But even those could not restore the sense of security to Jerusalem, as many of the passengers withdrew to standing behind bus stations as a possible protection, throwing a worried glance around and nothing that "at least during the war there was a siren."

"This is all temporary, in another two days you won't see any officers here," said Shoshi Atias, one of the few passengers seen today at the Shimon Hatzadik light rail station. "There's a feeling of fear. I take a bus from Pisgat Ze'ev to this stop and then I take the train, in order to avoid…passing through Shuafat. I do that to avoid being pelted with stones. The concrete roadblocks show that we're scared," she added.

Uri, another passenger, said: "Very quickly, these concrete roadblocks will be covered with graffiti and advertisements. It doesn't look like much thought was invested in this," he said. 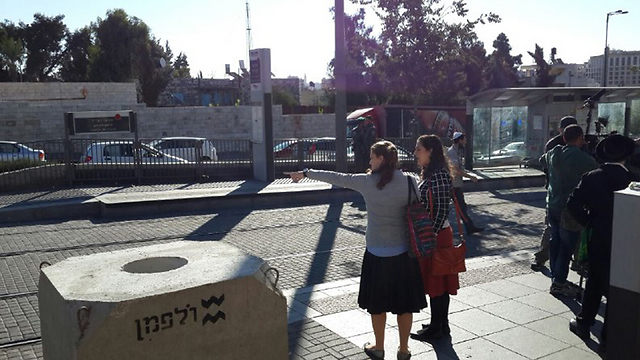 Economy Minister Naftali Bennett slammed the move to add roadblocks to the light rail stations, saying they constitute "a reward for terrorism."

"The solution for terrorism is not to put Jews behind fences and roadblocks, but to deter the killers," he said. Calling it the "defense concept," Bennett went on to say that "the solution is deterrence, not self-defense. The solution is not the Iron Dome concept, but the iron fist concept. We did it during Defensive Shield in Judea and Samaria, and the terrorism was stopped. We can do it now in Jerusalem as well."

Inside sources said the roadblocks were not a solution that could prevent attacks and that this solution was implemented due to pressure "from above." The possibility of installing more permanent protection measure was raised in discussions on the issue, but this would take time and be costly.

In addition to the roadblock, 300 additional policemen were deployed to the streets of Jerusalem on Thursday morning, on top of the 1,000 already deployed over the past week.

Clashes between Palestinians and security forces continued throughout the day Wednesday at the Shuafat refugee camp, the home of the light rail terrorist Ibrahim al-Akari, with Palestinian rioters hurling stones and Molotov cocktails at Israeli troops.

Several dozens of people protested at the scene of the attack against the police's powerlessness in stopping such attacks.

In coming days, police and the Shin Bet are expected to conduct extensive raids, arresting many residents of East Jerusalem in order to gather intelligence in an attempt to foil future attacks.