Rioters protest against police shooting of Khair Hamdan; thousands gather on main road, wave pictures of Arab youth, urge to suspend officers involved in shooting. 'My son was killed in cold blood because he is an Arab,' Hamdan's father says.

Dozens of rioters hurled rocks and Molotov cocktails at police officers and set tires on fire at the Beit Rimon Junction in the Lower Galilee on Saturday, in protest of the police shooting of 22-year-old Khair al-Din Rouf Hamdan, who was shot dead after he threatened officers with a knife.

Thousands of others gathered on the main road of Kafr Kanna protesting the police's conduct in the shooting. The protestors waved pictures of Hamdan, as well as Palestinian flags. They urged the government to suspend both the police officers who shot Hamdan and Internal Security Minister Yitzhak Aharonovitch. 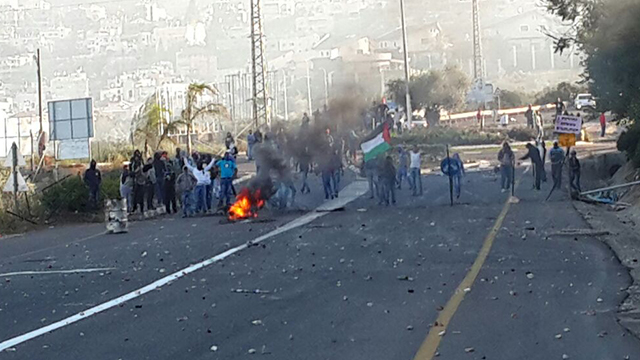 Rauf Hamdan, the father of the deceased, said to the crowd: "My son was killed in cold blood because he is an Arab. This disaster is not related only to Kafr Kanna, but touches the entire Arab sector. This is a racist act. We will not forgive the police. We will take the appropriate steps against the police." 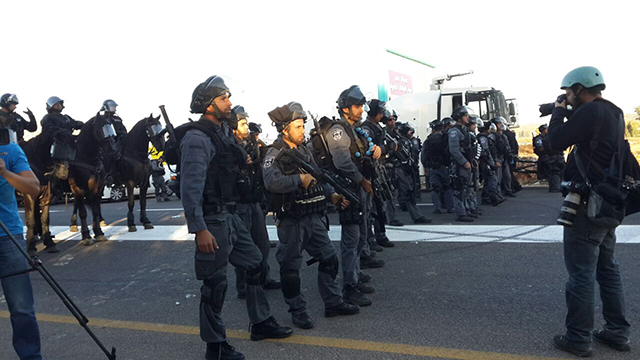 The demonstrators shouted: "We will sacrifice our lives for the sake of Al-Aqsa and Palestine", and "Israel is a terrorist state". 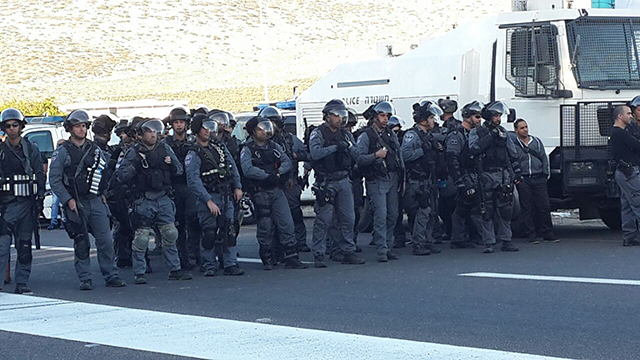 Sami Amara, a local resident, said: "This incident is revenge for the situation in the Al-Aqsa Mosque. The shooting on the part of the police proves their lack of responsibility. The martyr did not harm any officer. They want to shake off their responsibility. Luckily, we have documentation of the murder." 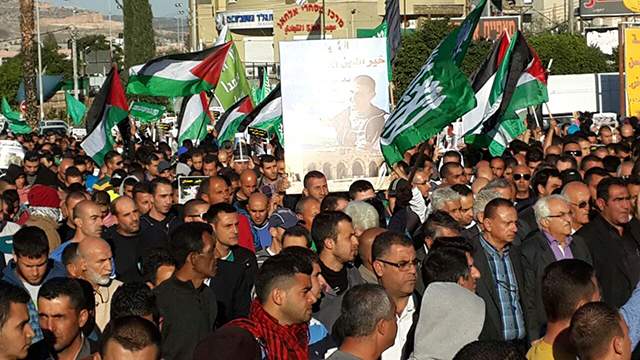 According to an initial report from the police on Saturday, Hamdan attempted to stab officers during the arrest of a resident of Kaffr Kanna. However, the police failed to mention that the officers were inside the vehicle during the attempted stabbing. 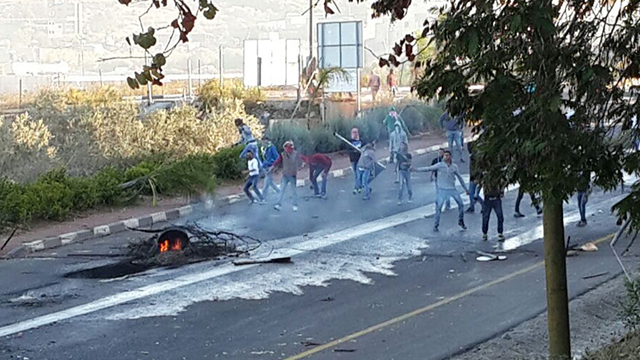 Video surveillance recordings obtained by Ynet show Hamdan approaching the police car, in which there were four police officers, and hitting the windshield of the car with a knife he was holding in his hand. Several officers are then shown stepping out of the vehicle, after which Hamdan quickly moved backwards.

One of the officers then proceeded to fire several shots, wounding him. The other officers helped the officer who fired the shots move Hamdan into the police car, after which he was transferred to the care of Magen David Adom paramedics. The medical teams evacuated him to the HaEmek Medical Center in Afula, where he died from his wounds.

According to police, Hamdan was shot dead after he attempted to stab one of the officers on Saturday night. The officers, who arrived at the town to arrest a different person, fired warning shots in the air, and said that after feeling that their lives were threatened, shot Hamdan, wounding him in his upper body.

Posters of Hamdan were put up in Kafr Kanna on Saturday. "Khair al-Din Rouf Hamdan, a victim of Arab hatred by the police and their minister," the posters read. The local council, headed by Mujahed Awaoda, the national council, and Hamdan's held an urgent meeting in light of the incident and called for the dismissal of the police officers and the police minister.

One hundred Arab teens gathered and threw stones at police officers at the southern entrance of Kafr Kanna on Saturday. Following the incident, the police decided to place police vehicles at the entrances of the village and to increase police presence at the site. The police were also holding dialogues with village leaders in an attempt to prevent a further escalation of violence.

Attorney Reda Jabar, the CEO of the Aman Center the Arab Center for Safe Society, said, "This incident deepens the distrust of the police by Arab citizens and accompanies the hard feelings towards the police that have existed for many years. A commission of inquiry must be established to investigate this incident and other similar incidents and it must be given broad powers to examine the complex relationship between the police and Arab society. During this sensitive and explosive time, this matter must be taken care of in a true and real manner."

The Abraham Fund, which works to promote equality and fairness in the policing of Arab citizens, said in a response, "The police must ensure a quick and thorough investigation of the shooting incident and bring to justice those responsible after investigating the facts. The investigation should be conducted transparently in front of the public and be communicated using Arab speaking media outlets. In general, the police should conduct the investigation and recent events with continuous open and effective communication with the leaders of the community in Kafr Kanna and the leadership of the Arab public as a whole. Communication and transparency are the keys for calm and prevention of further escalation."