Prime Minister Benjamin Netanyahu on Sunday accused Palestinian militant group Hamas and the Israel-based Islamic Movement of orchestrating the current unrest in Jerusalem and the Arab sector, warning that anyone who called for the destruction of the State of Israel would have their citizenship revoked.

"Israel is a nation of law. We will not tolerate disturbances, and we'll act decisively against the throwing of stones, Molotov cocktails, and fireworks, the blocking of roads, and demonstrations calling for our destruction. We won't tolerate any more demonstrations where they wave Hamas or Islamic State flags and tell people to liberate Palestine with blood and fire, and in effect call for Israel's destruction," Netanyahu said at the start of the weekly Cabinet meeting.

"Standing behind this incitement are – first of all – the various Islamic movements: Hamas and the Islamic movement in Israel. In the forefront, at least vis-a-vis the agitation on the Temple Mount, are the Mourabitoun and the Mourabiat – movements engaged in incitement and which are financed by funds from extremist Islam. I have instructed that they be outlawed." 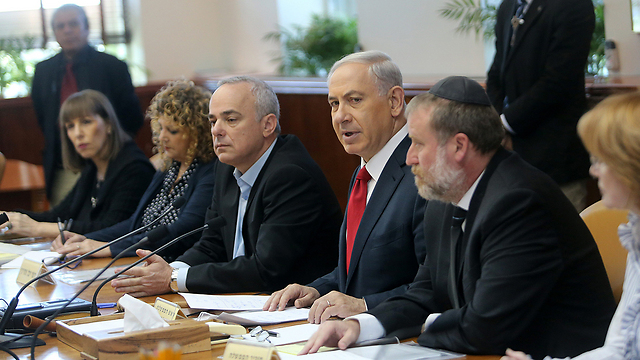 The comments come after two days of riots sparked when police shot dead a knife-wielding Arab man in the northern town of Kafr Kanna on Friday. Those protests follow on the heels of weeks of tensions in Jerusalem over rumored changes to the status quo at the Temple Mount, holy to both Jews and Muslims and currently under the control of a Muslim trust, a string of vehicular terror attacks and the attempted assassination of a right-wing activist and the subsequent killing of his suspected assailant.

Protests and riots in the wake of the shooting of 22-year-old Khair Hamdan on Friday led Israeli security forces to bolster their numbers in areas with Arab communities, while the Arab sector itself held a general strike Sunday, with schools and businesses being closed, and cars displaying black flags.

Meanwhile, the riots among the Arab population and fear of losing control in areas beyond Jerusalem have led to conflict within the government.

Finance Minister Yair Lapid lashed out at the prime minister for his comments, arguing that the government's role "is to put out the flames, not fan them."

"There has to be a limit to irresponsibility," Lapid said. "A man was killed and the police are in trouble. Ministers, members of the government, and members of Knesset must put out the flames, not fan them. We must continue to live here together. The fact that people are using this situation to gain political capital is irresponsible."

Netanyahu, on the other hand, announced a tough stance against the rioters. He said that he had instructed incoming Interior Minister Gilad Erdan "to use any means to explore the possibility of revoking the citizenship of those who call for Israel's destruction."

But Netanyahu's primary criticism was reserved once again for Palestinian Preisdent Mahmoud Abbas, who he accused of being the main instigator in the unrest.

"I gave instructions to outlaw these movements," he added, "but the Palestinian Authority, with Abbas at its head, still stands behind this incitement. Fatah's site explained in the last fews days that the Israeli people have never been here. We actually have an attempt here to distort not only the current reality, but also history."

"The violence and incitement among the Arab population in in Jerusalem have reached dangerous heights that could easily spill over. We should all try to reduce the flames, I wish to call on the leaders of the Jewish and Arab communities to work toward calming the situation," Peri said.

"Ufortunately, statements made by government ministers have been inflammatory. They are making it harder to ease the tensions."