Iran's Khamenei presents: How, why to destroy Israel

"Why should (and) how can Israel be eliminated?" Supreme Leader Ayatollah Ali Khamenei tweeted Sunday morning, posting an image with nine questions and answers detail why and how Israel can be taken out. 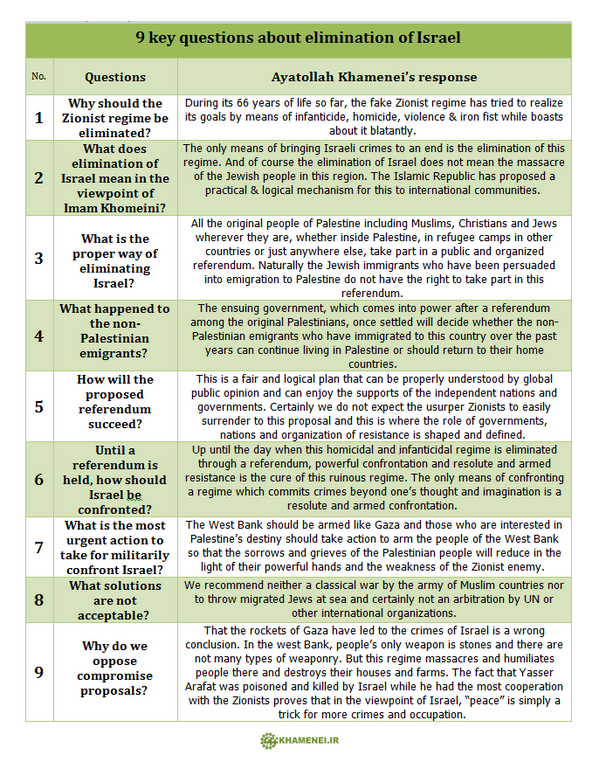 The post went online as Iran's Foreign Minister Zarif met with US Secretary of State John Kerry and EU envoy Catherine Ashton in Oman's capital Muscat on Sunday to address a decade-long confrontation that has raised the risk of a wider war in the Middle East.

Reiterating Iran's official line, Ali Akbar Velayati, a top aide to Khamenei, was quoted by Iranian media as saying the Islamic Republic would not abandon its nuclear "rights" but was committed to the negotiations under Khamenei's leadership.

Western countries and close US ally Israel suspect Iran has covertly sought to develop the means to build nuclear weapons.

Iran denies any secret nuclear weapons agenda, saying it wants peaceful nuclear energy only, but has refused to curb enrichment capacity and has been hit by damaging US, EU and UN Security Council sanctions as a result.

The discussions aim to put verifiable limits on Iran's uranium enrichment work - and any other potential path to a nuclear weapon - in return for a gradual lifting of sanctions.

The negotiations at a luxury hotel appeared to be intense. The Iranian, US and European delegations met from 11:30 a.m. to 2:30 p.m. local time, broke for lunch and consultations, and then resumed three-way talks just before 6 p.m. (1400 GMT).

Speaking to Iranian state television on his arrival in the Omani capital Muscat on Saturday night, Zarif reiterated that sanctions imposed on Iran had brought "no result" for the West.

"If the West is interested in reaching such a solution, there is possibility to find a solution and to reach an understanding before November 24," he said.

Quoted by Iranian student news agency ISNA in Tehran, Velayati said Iran "will not abandon our rights" over nuclear facilities at Fordow, Natanz and Arak as well over the size of its centrifuge program that enriches uranium for nuclear fuel.

Centrifuges are machines that spin at supersonic speed to increase the ratio of the fissile isotope in uranium. Low-enriched uranium is used to fuel nuclear power plants, Iran's stated goal, but can also provide material for bombs if refined much further, which the West fears may be Iran's latent aim.

"We are committed to the talks and our negotiators are acting based on a framework ... outlined by the leader," he was quoted as saying, reinforcing the widely accepted notion that Khamenei has the last word on important matters of state.

A senior Iranian official close to the talks told Reuters the Oman talks would examine "the gaps that are still huge, Iran's enrichment capacity and time frame of lifting sanctions."

Iran's ties to the West have thawed since a centrist, Hassan Rouhani, was elected president last year to try to end Iran's international isolation. But Western officials say differences remain over how to guarantee Iran's nuclear path is peaceful.