A soldier was stabbed Monday afternoon after a struggle with a Palestinian who attempted to grab his weapon at the Haganah Train Station in Tel Aviv. He was evacuated in critical condition to Sheva Hospital in Tel HaShomer.

Police forces and Magen David Adom emergency teams were deployed to the scene. Eyewitness accounts said the soldier was stabbed in his stomach and sustained massive blood loss. The suspect fled, but police officers arrested him a few streets from the scene. The suspect is 18-year-old Nur al-Din Abu Khashiyeh, a resident of Nablus illegally staying in Israel. 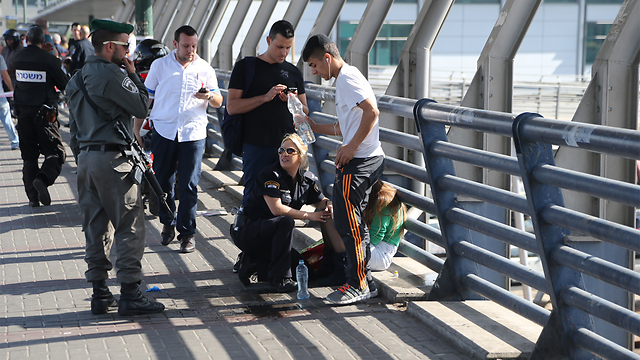 Tel Aviv Police Chief Bentzi Sau arrived at the scene and wished the soldier a speedy recovery. "The first clear picture we have is that a soldier was attacked by a member of a minority group living in Nablus. He attacked him with a knife, stabbed several times, and attempted to take his weapon."

He added: "The stabber escaped and after 200 meters from the scene of the attack he first came into contact with police forces. From here we have coordinated the investigation with the Shin Bet."

Gilad Goldman, in his 50s, noticed the incident and reacted immediately. "I got out of my car and saw him assaulting and stabbing the youth. I punched him in the face. He dropped the knife and began fleeing."

Goldman's friend was also involved in thwarting the scope of the attack.  "We began to chase after him, screaming 'terrorist!' We saw that he was getting away quickly, so I went back to help treat the soldier and direct traffic so emergency personnel could arrive quicker. We waited a long time until the ambulance came." 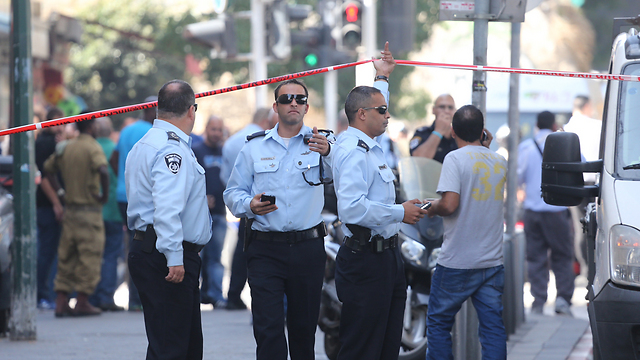 A senior medic with Magen David Adom, Moshe Amir, described what he saw when he arrived at the station. "On the road near the Haganah train station lay a young man, close to 20, unconscious. There was great confusion at the scene. We treated the victim and he was then evacuated in critical condition while undergoing resuscitation to Tel HaShomer hospital."

Magen David Adom personnel treated two people on the scene for trauma. Internal Security Minister Yitzhak Aharonovich arrived at the scene. He was given a cold reception by the locals who screamed "Where is the security?" and "Death to terrorists!" as he passed by.

Security forces said there were no specific warnings of such an attack. It appears likely that the suspect acted alone and without planning, much like the attacks in Jerusalem.

Last week, Border Patrol officer Jaddan Assad was murdered by a terrorist in Jerusalem in an attack on a Light Rail platform. Chief Inspector Assad, a 38-year-old resident of Beit Jann, is survived by his pregnant wife, Dareen, and his three-year-old son, Amir. Two others were seriously wounded in the attack while ten more sustained light-to-moderate injuries.