A mosque was set ablaze Wednesday in the West Bank and a few hours later a synagogue was attacked with a fire bomb, as tensions between Jews and Arabs reach a near fever pitch after weeks of tensions over Jerusalem which led to a string of terror attacks against Israelis and clashes between the police. 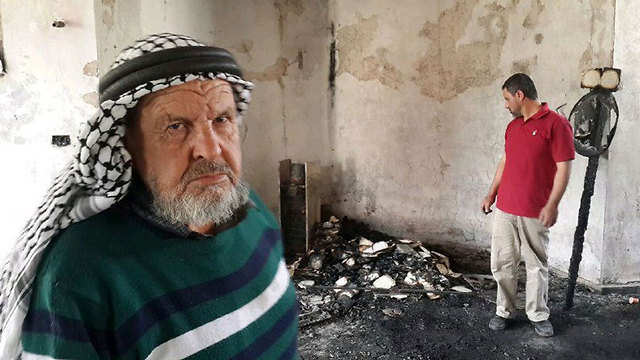 A fire broke out in a mosque near Ramallah on overnight, burning down large parts of the structure. The incident occurred in the village of Al-Maghir in the West Bank, a location considered a flashpoint for conflict between Palestinians and settlers. 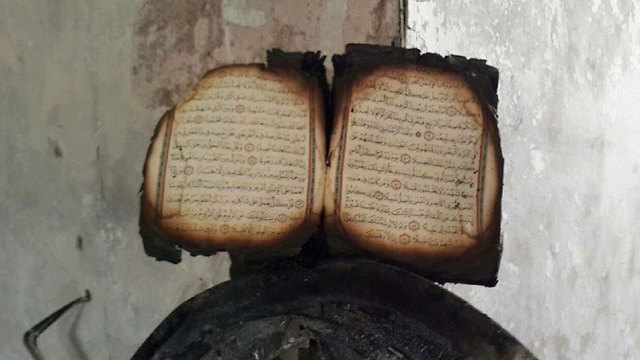 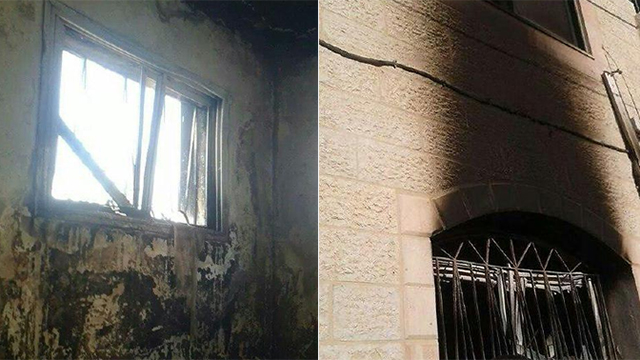 Civil Administration officials are examining whether the background to the event is nationalistic, and the Judea and Samaria District Police reported that the site has yet to be examined due to riots that erupted in the area. 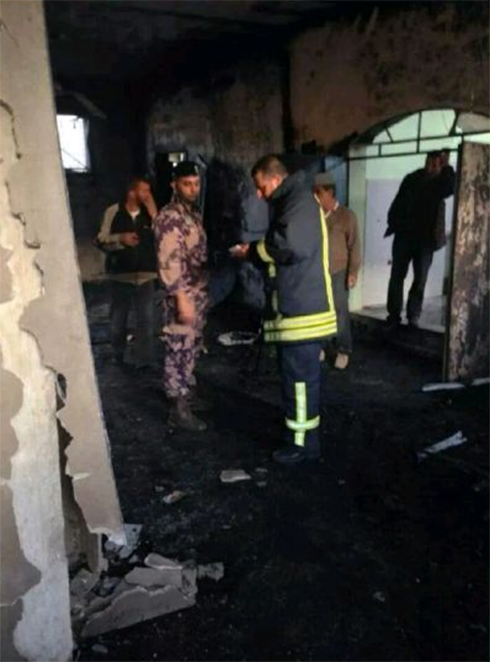 The fire occurred at around 3 am, and extensive damage was caused to the first and second floors. Fire trucks arrived at the scene in an attempt to contain the fire. Security forces, including Shin Bet personnel, are on their way to the scene to investigate the cause of the blaze. 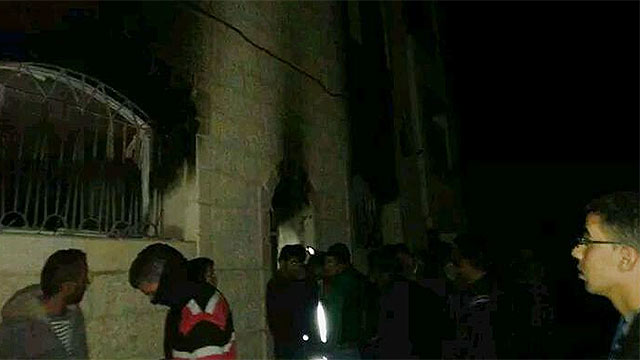 The West Bank district police stated that "A call was received in the morning hours about an act of arson against a mosque in the village of Al-Maghir." Israeli police spokesman Micky Rosenfeld says police are deployed outside the mosque but that "disturbances" that are underway in the town are preventing an investigation.

There has been repeated vandalism of cars and buildings in the village, and its second mosque was partially torched two years ago, the mayor said, blaming Israelis from nearby settlements. Israeli ultra-nationalists say such so-called "price tag" attacks are reprisals for Palestinian violence or for any attempt by the governments to curb settlement growth. 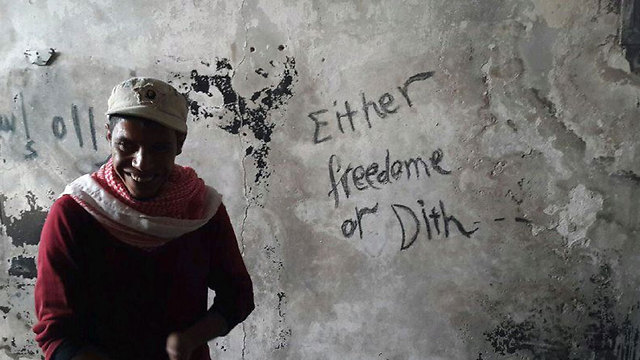 Shomron Regional Council Head Gershon Mesika, responded to accusations that settlers were behind the torching of the mosque and said: "The person who did this act is a pyromaniac who deserves to be condemned. However, it is important to note that as yet, no Jews have ever been arrested for torching a mosque, which calls for further investigation into the incident."

Mesika added that "we have already seen in the case of the mosque that was torched in Tuba-Zangariyye that a definite possibility exists that a resident of the village was behind the act of arson. I suggest that we let Shin Bet and the police do its work, find the culprits and bring them to justice."

Also on Wednesday night, a Molotov cocktail was thrown at the ancient synagogue of Shfaram. The bottle caught fire but caused only minor damage with no injuries. Shfaram police launched an investigation into the incident. 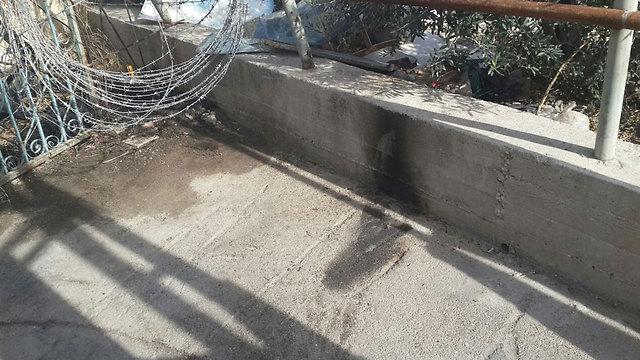 Local police are also investigating the throwing of a stun grenade at a gas station in I'billin, an Arab town in northern Israel, near Shfaram. No injuries were reported. 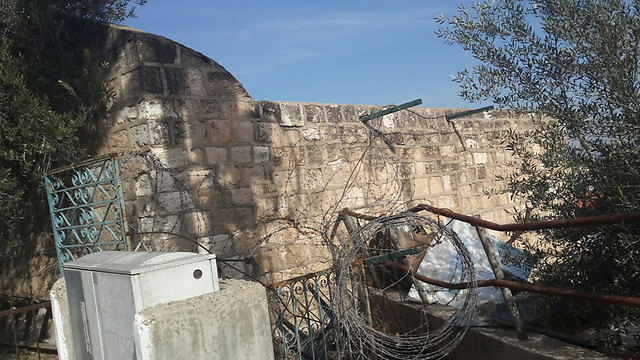 In a separate incident on Wednesday in southern Jerusalem's Beit Safafa neighborhood, anti-Arab graffiti was spray-painted and the tires of five vehicles were punctured. The graffiti, sprayed on a sidewalk, included the words "no cars, no Arabs." Local police launched an investigation into the incident.

In October, unknown assailants set fire to a mosque and spray painted the words "price tag Tapuach" nearby in the Palestinian town of Aqraba. The mosque was partially burned in the attack. No injuries were reported.

On Wednesday night, military and political officials spoke cautiously of a decline in the violence and tensions – both within the Green Line and beyond it. The comments were made despite a series of events that took place throughout the day, which included a Palestinian killed by IDF fire during a riot in the Al-Arroub refuge camp near the Gush Etzion junction.

The increased IDF presence in the West Bank and hitchhiking spots is expected to persist in the following days. Sources in the security establishment stressed that despite two fatal terrorist attacks in Tel Aviv and Alon Shvut, there have been relatively few incidents of disturbances and local violations of order.

"The Palestinian public has remained indifferent to the escalation and has not took to the street in masses to protest and violate order as had happened in the beginning of the second intifada," a military official told Ynet. "This is reflected also by the fact that the 10th anniversary of the death of Yasser Arafat, an event packed with volatile potential, ended without any irregular events."

Tensions related to Jerusalem have begun spilling over into the West Bank and Israel, leading to massive Palestinian protests, and a number of terror attacks, the most recent on Sunday, which saw a soldier and an Israeli women killed in two seperate incidents.

Tensions over the Temple Mount compound, which houses both the third holiest site in Islam and the holiest place in Judaism, have fueled repeated clashes between Israeli police and Palestinians in recent weeks, culminating in a one-day closure of the mosque last month.

Noam (Dabul) Dvir, the Associated Press and Reuters contributed to this report.