Is Sara guilty of not preventing a crime?
Photo: Shutterstock

The silent women of the binding men

Abraham bound Isaac, but where was Sara? This question can be asked about all wives of abusive men. Are they responsible for their situation? The responsibility rests entirely on Abraham and on the community that chooses to admire the binder.

Every year when the "Vayera" Torah portion emerges, I sit down to write the annual report on maternal silence, the "Sara Report."

There is no doubt that the responsibility for the Binding of Isaac rests on Abraham's conscience. Abraham erred in understanding God's trial. He was supposed to have argued against the command "Take your son," as he did for the people of Sodom. This time, however, he chose to be "God-fearing" rather than "people-loving."

At the same time, I can't stop myself from asking, "Where was Sara?" Why Sara knew what Abraham was capable of; he handed her over to the beds of the king of Egypt and the king of Gerar. He accepted her horrendous demand to expel Hagar and Ishmael, his firstborn son, so how could she trust him not to hurt her own beloved firstborn son?

Every year, with the emergence of the "Vayera" Torah portion, I ask myself if part of the responsibility for the binding rests on the shoulders of the wives of the binding men, and is any other options possible?

'I know you know I know that I don't know anything'

The Torah, like the reality familiar to all of us, silences the experience of the binder's wife. Sara's final words on the biblical stage (unfortunately) are the command to expel Ishmael and Hagar (Genesis 21:10): "Wherefore she said to Abraham, 'Cast out this handmaiden and her son; for the son of this handmaiden will not be heir with my son, even with Isaac.'"

And what happened afterwards? Does she know about the long trek that Abraham took Isaac on? Did she suspect him? And why didn't she protect the child?

At a point where the Torah is silent, the Midrash speaks, and it offers Sara's version of the Binding of Isaac (Tanchuma, Vayera, 22-23): "Abraham said, 'What should I do? If I reveal to Sara, well women's opinion is faint even on small matters, how much more so on a significant matter like this. And if I will not reveal to Sara and I take Isaac at a moment when she doesn't see him, she will commit suicide.'

"What did he do? He said to Sara, prepare for us food and drink and we will eat and be happy. ... When to elderly people like us give birth to a son in their old age it is worthy to drink and to be happy... When they were enjoying the food, he said to her, 'You know when I was three years old I came to know my Maker. This boy is already bigger than I was and he is uneducated. There is one place a little far away from us where the boys are educated, I will take him there and I will educate him.' She said to him, 'Go peacefully...'

"At the same time (that Abraham was binding Isaac), Satan visited Sara, appearing before her disguised as Isaac. As a result of seeing him she asked, 'My son what has your father done to you?'… Before he could finish talking, her soul left her."

Abraham is presented in this Midrash as arrogant and as a religious fanatic, who suspects that Sara with her "faint opinion" will prevent him from his fanatical act. Abraham knows that Sara does not trust him, and that if he takes Isaac without her permission she will commit suicide out of fear and guilt.

Therefore, we will write in the Sara Report: Abraham knows that Sara knows that he is fanatic and dangerous.

'My son, what has your father done to you?'

This sentence hits me hard every time I read it. How shocking is the experience of a mother who asks her son such a question. The Midrash's author shares that Satan, dressed as Isaac, only just appears before Sara when the mother's outcry bursts out of her mouth: "My son, what has your father done to you?"

Therefore, it shall be written in the Sara Report: Sara knew that Abraham would hurt Isaac, as she cried out even before "Isaac" opened his mouth.

Is Sara guilty of not preventing a crime?

Every year, with the reoccurrence of the "Vayera" Torah portion, I discover that my picture of the world is changing, along with the Sara Report.

Recently, an Israeli court sentenced polygamist Goel Ratzon to 30 years in jail. Upon the revelation of the shocking stories, questions began being raised about the responsibility of the mothers, Ratzon's wives, for the suffering he caused his children. And suddenly it became clear to me that the only answer is no. They are not guilty, they are the victims.

Would I have wanted them to find the strength to rescue themselves from distress and protect their children? Of course. But does that make it acceptable to blame them for not preventing the crime? I believe that if we did that, we would be blurring the boundaries between victim and aggressor.

Therefore, it will be written this year in the Sara Report: It's sad to learn that Sara did not find the strength to protect Isaac, but it is impossible to blame her for the Binding of Isaac.

So who is responsible for not preventing a crime?

I think the community at large is ultimately responsible. Ratzon's wives were captives in a psychological and physical experience of terror. They were unable to save themselves, and therefore it would be foolish to think that they could have saved their children.

But the community at large that was not captive to Ratzon's manipulative charm was supposed to have taken responsibility. And the community, with all its institutions, is certainly guilty for many years of negligence in preventing the crimes.

Sexual offenses are also a matter of geography

Immediately after Goel Ratzon's sentence was announced, a bold and profound column was published in Ynet's Judaism channel by Sara Einfeld, a former member of Ger Hasidic movement.

In her article, she equates her suffering as Ger Hasid to the suffering endured by Goel Ratzon's wives: "In the community I lived in, from the age of 17 every single woman got engaged, married and started having children. Not one of us knew her husband before that. This was always the decision of the matchmakers, the parents, and mostly the Ger Rebbe, who chose my husband for me without knowing me at all.

"The second time in my life that I saw my husband was at our wedding... There, under the wedding canopy, I began realizing the insanity. ... Like the Rebbe's big factory – everything goes to one place: To enlarge the community, and as much as possible." 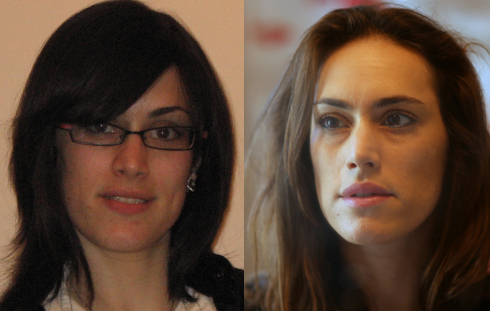 Sara Einfeld. 'Ger women, your suffering is happening in the wrong place, and none of the community leaders have any interest in it' (Photo: Noam Peled)

Sara Einfeld chalelnges those who point accusing fingers at Goel Ratzon's wives (or the Ger wives), and she is the one who helped me understand that I need to change the Sara Report and place all the responsibility for the crime on the silent community at large.

However Einfeld's words spur a difficult question regarding communal responsibility. Einfeld describes sexual violence and abuse directed her under the supervision and instruction of the Ger Rebbe (the leader of the largest Hasidic movement in Israel).

Why is the State of Israel protecting Goel's wives (even if extremely late) but isn't protecting the abused women of the Ger Hasidic movement?

Here are the reasons

For the same reason that the State of Israel permits doctors to give completely healthy women fertility treatments which endanger their health and even their lives.

For the same reason that the State of Israel allows several rabbis and politicians to deprive hundreds of thousands of children of basic education, and condemn them to a life of poverty and ignorance dependence on rabbis and religious activists till their very last day.

For the same reason that the State of Israel permits the rabbinical courts to prevent a woman who becomes non-religious from meeting with her children.

For the same reason that the state permits rabbis to determine that certain people are "mamzerim" (people born as a result of a forbidden sexual union) and do not have the right to get married.

Unfortunately, we must say that the fate of Goel Ratzon's wives is better than the fate of the Ger wives, as Goel Ratzon is a much more "convenient" case for the state. He is a convicted criminal who is not connected to the government.

It's not only pornography that is a matter of geography, but also sexual violence. No one will investigate Einfeld's claims nor any of the other claims raised here or in a thousand other articles, because unlike Goel Ratzon, the Gur Rebbe and other rabbis are tightening their grip around the necks of senior Israeli politicians.

Moreover, Israeli politicians (those that are not farsighted) have a vested interest in maintaining the merciless marriage and reproductive factory and the haredi society's life of poverty and ghetto.

A stockpile of "captures infants" (a Talmudic term referring to individuals who sin inadvertently as a result of having been raised without an appreciation for the thought and practices of Judaism) is a desired resource of potential political support.

People who have nowhere to go, and are brainwashed with the demand to be limitlessly fruitful and multiply, will place the right ballot in the voting station, and in a wonderful "deal" hundreds of thousands of votes will reach the hands of the secular politicians, who will in turn repay with increased fortifications on the ultra-Orthodox control mechanisms.

How long will this go on? Apparently until we collapse.

I am sorry for your suffering, Sara Einfeld

And I am sorry for your Ger sisters. Your suffering is happening in the wrong place, and none of the community leaders have any interest in it.

And the Sara Report? I am sorry for her too and for her flaws, but she must not be blamed. The responsibility rests entirely on Abraham and on the community at large that chooses to admire the binder.

And in the beit midrash of talkbacks

I went back and reviewed my column about incest, and I saw that it is still raising critical responses trying to minimize the shocking statistic that one in seven people is a victim of incest.

Shachar (talkback #51) suggested, "I think we are talking about one in seven victims of abuse. In other words, the statistic is one in three suffer from sexual abuse, and out of them, one in seven is a victim of incest. This does not make the statistic any less shocking, and this happens all sectors, at about the same rate."

You are right that this happens in all the sectors, and that even one in seven victims of sexual abuse is horrifying, but the statistic is in fact one in seven people! I rechecked, I inquired, I consulted with other professionals in this field. This is the statistic, and it is even considered a conservative estimate.

I do not think that you are disagreeing with me out of bad intentions, God forbid, but out of shock. And so I will add and repeat it again and again, so that we know the truth in order to protect our children: One in seven people is a victim of incest.