'Israel has opportunity to show world it is a law-abiding nation,' says father of Nadim Nawarah, 17, who was shot to death in May during Nakba Day clashes.

Relatives of one of the two Palestinian youths shot to death in Beitunia on Nakba Day praised the Jerusalem Magistrate Court's decision Wednesday to extend the remand of the border guard suspected in the incident.

Judea and Samaria District Police, who arrested the guard, is investigating a charge that he used live fire when shooting at Nadim Nawarah, 17, and Muhammad Salameh, 22. The guard's remand was extended by six days.

Security camera footage of the incident

The shooting occurred in May, during clashes marking Nakba Day at the Beitunia checkpoint, where disturbances included stone-throwing and tire-burning. Salameh was shot in the back, while Nawarah was shot when he was not throwing stones or endangering soldiers.

"We know the investigation is still ongoing, but as a first step this is very important to us," Siyam Nawarah, Nadim's father, told Ynet. 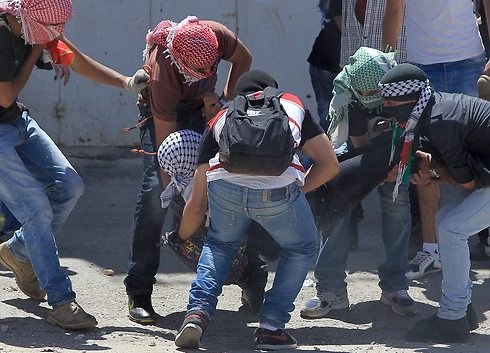 The shooting in Beitunia (Photo: AFP)

The father emphasized that the family would closely watch developments in the case. "This is Israel's opportunity to show the entire world that it is a law-abiding nation, meaning that the law is equal for Palestinians and Israelis. Israel must show the world that it will punish the officer in the same way as it would a Palestinian who shot an Israeli.

"If a Palestinian murders an Israeli, he gets a life sentence, and that's exactly what the officer should get for murdering a Palestinian," he added. "Justice should be blind and equal for both sides."

He also praised Israeli security forces for the in-depth investigation. "I'm satisfied by the fact that Israel is taking the right steps in this case."

The father said that he received an official message on Wednesday from an officer of the District Coordination Liaison Office on the policeman's arrest.

He recounted that during the preceding days, he received a visit from Judea and Samaria District's central police unit, and that he answered all their questions.

He noted that he had felt that investigators were close to arresting a suspect, and wasn't surprised when he heard of the officer's arrest.

Mere days after Nadim's death, his family handed over the bullet lodged in his backpack to the Palestinian attorney general.

The Israeli human rights organization B'Tselem began investigating the incident shortly after it occurred, discovering that live ammunition had been used against the protestors.

B'Tselem said Wednesday that "The investigation must be speedily completed and the persons responsible for the killing of the two youths stand trial.

"This incident is exceptional in the rare body of evidence available: full footage of the incident captured by security cameras, a bullet recovered from Nawara's backpack, and metallic fragments extracted from Nawarah’s body during an autopsy.

"B’Tselem does not know whether the officers arrested are also suspected of having killed Salameh (Abu Daher) and injuring two other youths, and whether anyone will be held accountable for those cases."

Meanwhile, the officer's commander was also investigated under suspicion that he knew about the use of live ammunition but didn't report it. Following a night in custody, he was released Wednesday to house arrest until Sunday.