An audio tape of Islamic State leader Abu Bakr al-Baghdadi was released on Thursday, reportedly disproving the rumors that he was killed in an explosion last week in Iraq. Al-Bagddadi said that the military operation against the Islamic State has been "the most unsuccesful," and urged attacks against Arab countries - namely Saudi Arabia.
AUDIO: Abu Bakr al-Baghdadi on Israel, Jews
X

There have been contradictory accounts out of Iraq following US air strikes on Friday about whether Baghdadi was wounded in a raid. The United States said on Tuesday it could not confirm whether he was killed or wounded in Iraq following a strike near the city of Falluja.

The speech was not dated but carried a reference to a Nov. 7 US announcement that President Barack Obama had approved sending up to 1,500 more US troops to Iraq. 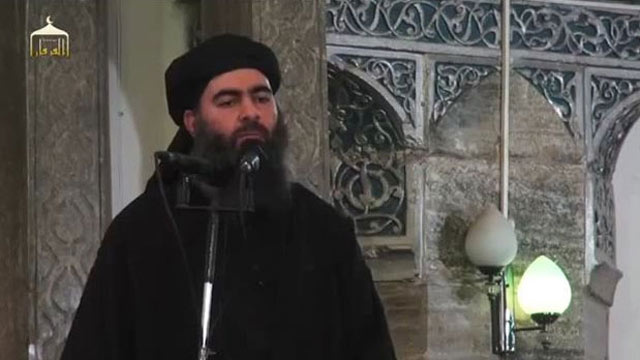 In the recording, al-Baghdadi said the military operation by the international coalition against the Islamic State group was one of the "most unsuccessful ever," and that Israel is "a secret partner" in the coalition. He also repeatedly slammed "he Jews"

"The leaders of the Jews, crusaders, heretics, their devils, their masters and their officials met. They thought assessed, planned, fortune and prepared for war against the organization of the Islamic State. So they came out with a failed plan," said al-Baghdadi.

"The agents of the Jews, the cusaders, their slaves, their dogs and their tails on the ground did not hold out against the Islamic state and will not endure. The Crusaders were defeated. With Allah's help they were defeated. Muslims win through Allah. The onslaught of jihad fighters will continue until they reach Rome with Allah help," al-Baghdadi continued.

Regarding Saudi Arabia, al-Baghdadi said the Saudi leaders were the "head of the snake," and urged Islamic State supporters to attack them and the Shiites in the kingdom.

"O sons of al-Haramayn (Saudi Arabia)...the snake's head and the stronghold of the disease are there...draw your swords and divorce life, because there should be no security for the Saloul," Baghdadi said, using a derogatory term to refer to the leadership of Saudi Arabia.

The Islamic State leader urged Arab countries to carry out attacks against Morocco, Tunisia, Algeria, Libya, Saudi Arabia, Yemen and the Sinai Peninsula. Al-Baghdadi added that the US will soon have to bring in ground troops to fight the Islamic State.

"Oh soldiers of the Islamic State...erupt volcanoes of jihad everywhere. Light the earth with fire against all dictators," Baghdadi said.

According to al-Baghdadi, the Islamic Caliphate that the Islamic State is attempting to create has already spread to Saudi Arabia, Yemen, Egypt, Libya and Algeria.

Last Saturday, the United States said it had no information to indicate al-Baghdadi was wounded near the Iraqi city of Mosul, or if he was even in the convoy that was targeted, US officials said on Sunday.

The officials, speaking on condition of anonymity, were asked about an account on Twitter that said Baghdadi had been wounded in the strikes.

Iraq's Foreign Minister Ibrahim al-Jaafari said that no final conclusions should be made on the state of al-Baghdadi until further evidence will be found on the matter in an interview with the Saudi newspaper al-Watan on Thursday morning. Al-Jaafari added that Iraq had not received any verification that al-Baghdadi had been injured or killed.