Kerry meets with Oman FM in last ditch effort to reach accord before Nov. 24 deadline while British FM says he's not optimistic deal can be reached by Monday.

British Foreign Secretary Philip Hammond said on Wednesday he was not optimistic that world powers and Iran would clinch a full nuclear deal by November 24 but that there may be a way of extending the self-imposed deadline.

"I'm not optimistic that we can get everything done by Monday," Hammond told reporters in the Latvian capital.

"But I think if we make some significant movement we may be able to find a way of extending the deadline to allow us to get to the final deal if we're making a good progress in the right direction." 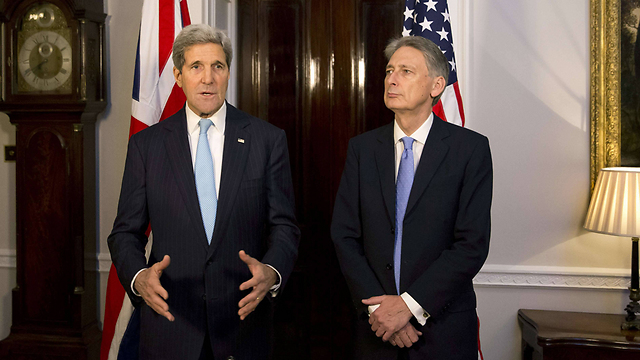 Kerry trying to reach deal by deadline, Hammond not optimistic (Photo: AFP)
In an attempt to end the 12-year dispute over Iran's nuclear program and dispel fears of a new Middle East war, six world powers and Iran are negotiating a settlement they hope can be reached by Monday.

They aim to reach a comprehensive settlement at talks in Vienna that would curb Iran's atomic activities in return for a phasing out of sanctions that have severely hurt its oil-dependent economy.

Iranian and Western officials have said the deadline is unlikely to be met and that an extension is the most likely outcome. They say it is possible to agree the outline of a future accord, but it would take months to work out the details. "We do very much want to see a deal done with Iran, but we don't want to do a bad deal. Better then no deal than a bad deal," Hammond said. "The right deal with Iran has to be one which gives us the assurance we need that Iran's programme is exclusively targeted at civil nuclear use, has no military dimension at all and where Iran's enriched capacity is limited to a level which does not present any military threat," he said. Hammond said Iranian negotiators would have to show "considerable further flexibility" over the next four days to get a deal. The six states - France, China, Russia, Germany, the United States and Britain - want Iran to scale back its capacity to refine uranium so that it would take much longer to produce fissile material for a bomb if it wanted to.

Tehran says it is enriching uranium only to make fuel for nuclear power plants and that this is its sovereign right.

Meanwhile, US Secretary of State John Kerry met Wednesday at his hotel with Yusuf bin Alawi, the foreign minister of Oman, a key go-between in discussions between Washington and Tehran, according to a senior US official. 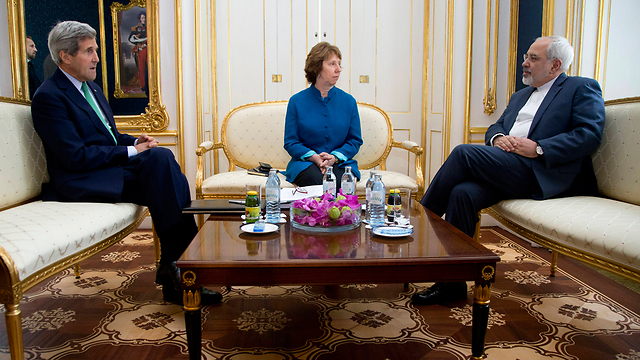 Bin Alawi was in Tehran last weekend and met with Kerry Tuesday. Their follow-up meeting was unannounced, confirmed only after an Associated Press reporter saw the foreign minister in the hotel.

Oman, unique among the Gulf Arab states for the close ties it maintains with Iran, hosted high-level nuclear talks earlier this month and was the site of secret US-Iranian gatherings dating back to 2012. Those discussions laid the groundwork for an interim nuclear agreement reached a year ago, which world powers and Iran are now trying to cement in Vienna with a comprehensive pact by Monday.

Prolonging talks preferable to bad accord

In Washington, Obama administration officials, congressional aides and independent experts who've closely monitored the discussions said an extension of the talks was most likely. In a twist, many opponents of the diplomacy now see a prolonging of the negotiations as more preferable than an accord.

Even though many lawmakers opposed an extension when the last one was announced in June, aides in both parties said an agreement now would be viewed as a sign of the administration's desperation to secure a diplomatic breakthrough at any cost. 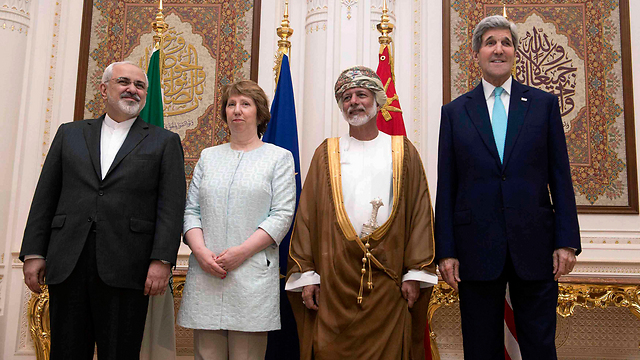 Republicans in particular want more time so that they can attempt to pass new sanctions legislation that would pressure Iran into greater concessions. The Senate's plan is to bring up a package of conditional penalties after January, when Republicans take the majority, according to aides who weren't authorized to speak publicly on the matter and demanded anonymity.

Some Democrats are on board with that effort, though Obama has threatened to veto any new sanctions threatening the diplomacy.

The midterm elections have others, too, weighing their approaches. The powerful pro-Israel lobby, AIPAC, issued a statement after the last extension urging the US government to "make clear that Iran can expect no further extension of the talks."

But it currently is taking no stance on whether another extension or a deal is preferable, given the parameters of the potential agreement are unknown. Also, a prolonging of talks could entail a new set of questions if accompanied by a framework for a future deal, an agreement of principles or some other understanding to guide the diplomacy going forward.

With Obama expected this week to issue an executive order on immigration, several aides pointed to the political unlikelihood of a nuclear deal coinciding with that effort. Both would demand the administration make a vigorous defense of policies with questionable public backing, fierce Republican opposition and mixed support even among Democrats.

Susan Rice, Obama's national security adviser, last month put the chances of a deal at less than even.

David Albright, a former UN weapons inspector who advises the US government on Iran's nuclear program, said this week the interim deal would likely need to be extended again. Among the outstanding issues he outlined were the lack of progress in opening up Iran's military sites, gaps on the number of uranium centrifuges it should be allowed to maintain and its continued failure to come clean on all military aspects of its nuclear program.