PM: No room for discrimination against Israeli Arabs

Netanyahu, Livni, Lapid and Erdan lash out at Ashkelon mayor for banning Arab construction workers from vicinity of kindergartens in southern Israeli city.

The political storm brewed by an announcement by the mayor of Ashkelon on Wednesday that said he would prohibit Arab construction workers from working near the city's preschools erupted criticism from every direction, including Prime Minister Benjamin Netanyahu who said, "There is no room for discrimination against Israeli Arabs" on Thursday.

Netanyahu blasted the decision of Ashkelon Mayor Itamer Shimoni to limit Arab construction workers in the southern Israeli city and said, "We cannot generalize an entire community because of a violent and enflamed minority. The vast majority of Israeli Arab citizens are law abiding, and those who break the law – we act decisively and firmly against them." 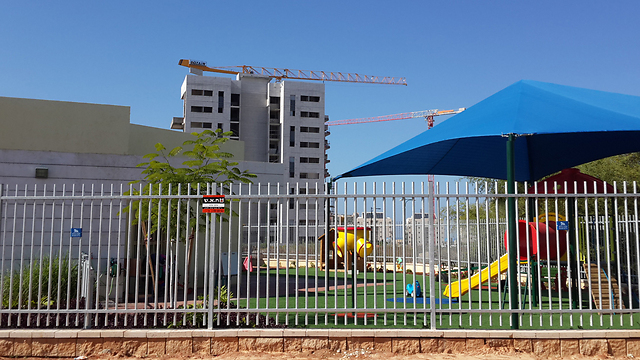 A construction site near a playground in Ashkelon. (Photo: Roee Idan)
"The framework of the Basic Law for the Nation-State of Israel that I am bringing to the government on Sunday, will complete the equality of all citizens before the law regardless of their religion, race or gender along with the promise of Israel's identity as the Jewish national home – there is no contradiction between the them and I will not allow an undermining of these two basic principles," Netanyahu continued. Justice Minister Tzipi Livni requested that the Attorney General, Yehuda Weinstien, check the operations of the Ashkelon municipality. "This is a directive for discrimination of a group that does not comply with the general security opinion which is against the discrimination of workers or those seeking work based on nationality or religion. (This discrimination) is prohibited and should be handled to the full extent of the law," said Livni. Police sources from the Lakish police unit in Ashkelon said they would continue to operate according to the law and not stop workers based on their ethnicity. "There are no exceptions to the guidelines in regards to Ashkelon, we will only arrest workers if they do not have a working permit," the police said in a statement. Internal Minister Gilad Erdan ordered Internal Ministry officials to check the legality of Shimoni's order to prohibit Arab construction workers in the city. "This decision is unacceptable in my eyes," said the internal minister, a former resident of Ashkelon. "We cannot act in a way that excludes and tarnishes an entire community of the State of Israel. These sorts of decisions are likely to lead to heightened tensions and ignite the flames. At this time, the leadership must work to calm the spirits and return the sense of personal security. I understand the worry of the mayor and the residents, but in order to return security there is the police and the IDF and the municipality's have the ability to secure public institutions and sensitive areas," said Erdan. Finance Minister Yair Lapid also addressed the controversial order by Ashkelon's mayor and said, "The calls today to not employ Arabs in the State of Israel are racist. It is surrender to terror, because we are abandoning our daily lives to the hands of the radical perpetrators instead of supporting coexistence. The vast majority of Arab Israelis lives with us in coexistence and we do not need to offend them and act this way. It is unacceptable, intolerable and it will not be."

Remarks made by Lapid and Livni were made at a news conference regarding the Fair Rental Law in Tel Aviv on Thursday.