Fortifications ranging back 2,500 years have been unearthed Wednesday by archeologists near Israel's border with Gaza.

The structure, which was found together with arms, indicate the site was a fortified military barracks or community, and is dated back to fourth century Persian Empire's war with Alexander the Great. Ironically, at present, the location – Israeli community Netiv HaAsara - is surrounded by fortifications in light of the omnipresent rocket threat from Gaza. 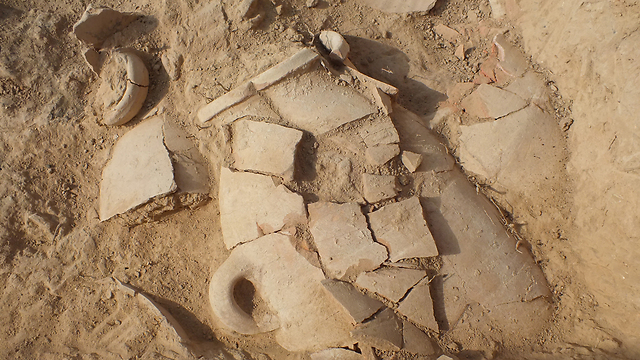 The first discovery was made when the community was doing infrastructure work and discovered part of the structure that led archeologists to believe the ruins of an ancient community might be found there.

After Operation Protective Edge had ended, work began to revamp the community's infrastructure, which suffered a heavy blow during the 50-day conflict, and expand it to be able to account for some 70 new houses. The community is a few hundred meters from Israel's border with Gaza. When the project broke ground, bulldozers begun pulling up unique stones that made them stop their work and call in archeological experts. After working day and night, they began to extract amazing artifacts ranging from sifters to stone ovens, to small storage units and pottery. One of the storage units even revealed bottles for storing wine and olive oil. However, these were only trinkets compared to the dig's truly impressive find: A fortified tower, which attests to the time and nature of the community. "Netiv HaAsara was probably a fortified road stop en route to the sea during the Persian era. Because of its location, some 10 km from Gaza City and 10 km from Ashkelon to the northeast, the community was the perfect link between the two, as part of a long line of fortified seaside communities," said Dr. Yael Abadi-Rice from the Israel Antiquities Authority. 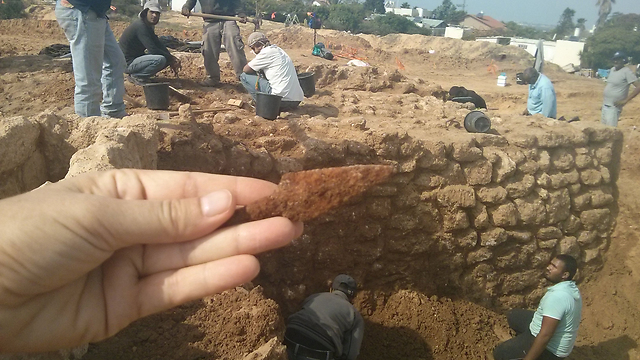 "At the top of the hill we discovered a fortified tower built of kurkar stone and mud bricks. A staircase was used to climb atop the massive tower, which has been preserved in part. During the dig we found weapons, including arrow heads and spearheads made of bronze and iron. The arms teach us about the military nature of the site. It was violently destroyed, likely near the end of the Persian era, when Alexander the Great conquered the area in the 4th century BC. The site hasn't been re-populated until the Byzantine period, some 1,000 years later," Dr. Abadi-Rice said.

In the wake of the archeological discoveries, construction work at the site has been halted for a short while, but have since renewed. The Israel Antiquities Authority and Netiv HaAsara will try to find a solution to preserve at least part of the findings uncovered at the site. Meanwhile, the discoveries became talk of the hour, an attraction drawing many of the residents of the area. Some of the ancient structures uncovered are in plots designated for construction of homes for new residents. Some of them arrived at the site in recent days only to discover an ancient battle station where their homes are to be built. And now they know that the security threats they are dealing with in the modern era existed 2,500 years ago as well, only the weapons have changed.