The children of the Third Intifada

Ynet speaks to Palestinian youths who have chosen to resist Israeli police using stones, tires, and fireworks, rather than attend school.

Meet Salah, Ahmad, Hassan and Riyad – the children of the third intifada.

They appear masked, throwing stones at Israeli police officers and lighting tires on fire. These children - between the ages of 8 and 13 -prefer to join in the Palestinian riots that have swept the streets of East Jerusalem and the surrounding area, instead of going to school. 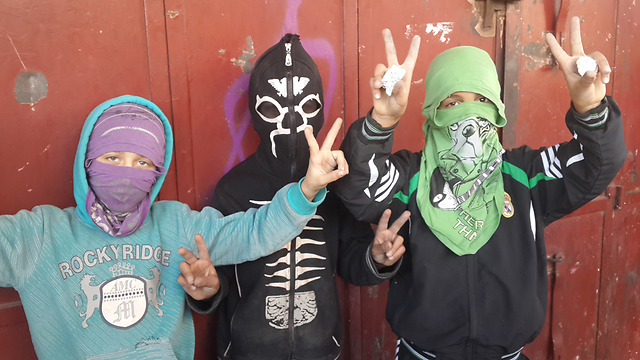 “We are willing to die as martyrs, we have nothing else to lose,” says one.

“Our heads are not in our studies, we are always planning what to do against (Israeli) police officers,” says another.

Last week, during an evening of unrest in East Jerusalem, hundreds of masked Palestinian children rioted at the entrance of the Shuafat Refugee Camp, throwing fireworks at the Israeli police officers who arrived at the scene. Many of the children had been there the entire day, skipping school. 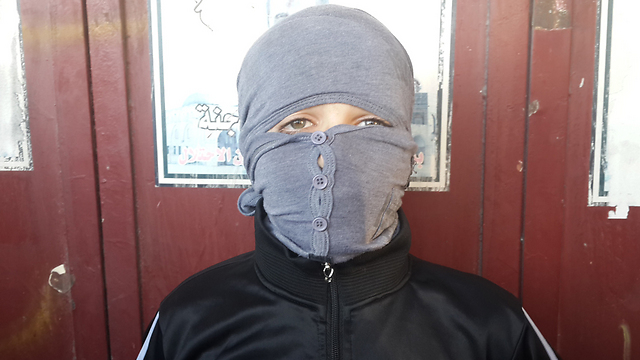 A Palestinian child who takes part in the riots at the Shuafat Refugee Camp. (Photo: Mohammed Shinawi)

“We are protesting and throwing stones as a response to the martyrs that were murdered and for everything that is happening at the al-Aqsa mosque,” says one 13-year-old boy.

“Today I didn’t go to school because I want to continue our resistance as a response to the murder of the martyr Ibrahim al-Akari and all the other martyrs,” he continues, referring to the Palestinian terrorist who carried out a vehicular attack that killed one Israeli and wounded at least 14 other people. 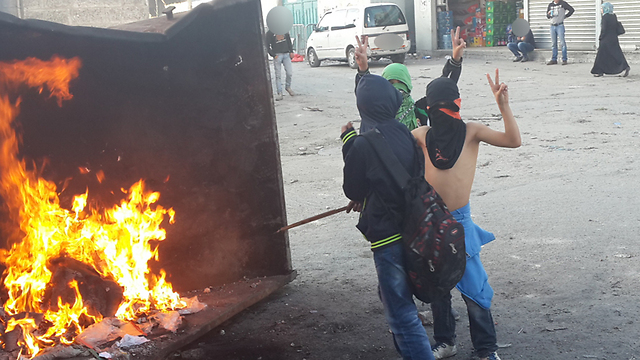 Akari was a known Hamas operative and his brother was serving a life sentence for murdering an Israeli police officer prior to his release in the Shalit prisoner exchange deal. Hamas claimed responsibility for the attack.

“Everything that is happening in al-Aqsa really annoys us. It is a holy place that is meant for Muslims,” the youth continues.

The same 13-year old boy asked for the masked youth who throw stones and fireworks not to be called rioters. 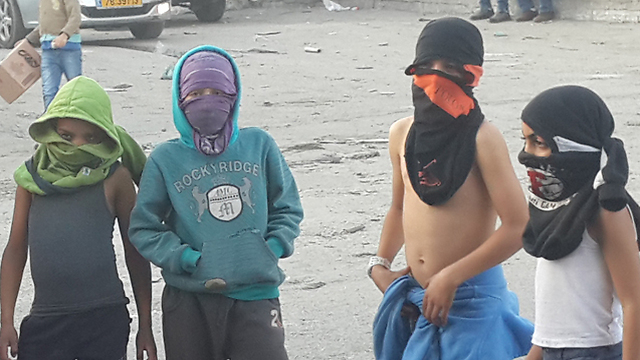 Palestinian children who have skipped school to join the rioting in East Jerusalem. (Photo: Mohammed Shinawi)

“We the children have to take some of the responsibility and protect al-Aqsa in our way. We here are not rioters as they call us but rather protectors of our land, our home, and our holy places,” he says.

“The rioters are the Israeli policemen that attack woman and children and ruin homes."

Another boy says that the rioters are willing to pay the price, even if it means their life, in the name of Palestine and al-Aqsa. 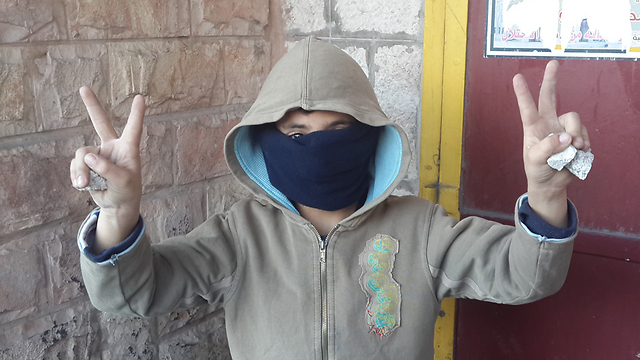 “We must have twice the response towards the occupying forces and it does not matter at what price,” he says.

“All of us are willing to sacrifice our lives and die as martyrs. We have nothing to lose. It is true we are kids but we have courage and strength to do many things like heroes. Israel attacks children and we will not let this happen quietly. Al-Aqsa is ours and we will not give up on it."

Another boy, from the East Jerusalem neighborhood of Silwan, speaks of a difficult environment.

“We feel degraded. There are checkpoints everyday and searches, grenades, tear gas – I have trouble dealing with the situation,” he says.

“I have no urge to study or go to school. Today, the only thing I think about is throwing stones at police. As long as they are here we will continue our resistance without stopping. I wait for the day when I will live in a quiet and good environment. Unfortunately, the Israeli government is the primary inciter that causes all the mess and terror attacks. If they continue with the same behavior, it could lead us to join the attacks."

An 8-year-old boy among the rioters says he receives encouragement from his parents and friends for his actions.

“Our blood is not cheap. This is the time to resist, it is more important than being at school or at work. If we do not respond they will eat us. Everyone always calls on students to join the struggle,” he says.

“I pray for the release of the prisoners from the occupier’s prison and inshallah (with the help of God) we will succeed to release Palestine and Jerusalem,” he adds.

“All the students at school cannot concentrate on studies," says another boy.

"Everyone thinks about the situation we have been thrown into. My friends and I plan everyday what we will do during the day against the police officers. We’ve thrown Molotov cocktails, fireworks and stones. I’m proud of what we do,” he says.

Several checkpoints were erected in East Jerusalem in the past week. Israel Police and Border Patrol have been carefully checking cars and drivers.

In the East Jerusalem neighborhood of Jabel Mukaber, the town of the two terrorists behind the Jerusalem synagogue massacre, at least three checkpoints were installed.

“We feel like we are at the Qalandiya checkpoint (a Palestinian village in the West Bank between Jerusalem and Ramallah). The checkpoints that have been put up are not justified,” says Hamad Zaatara, a resident of Jabel Mukaber.

“They simply caused traffic and pressure. I personally leave for work at 7 in the morning. Because of the checkpoints I have to leave the house at 6 am,” Zaatara says.

Hamada Avdah, a resident of Jabel Mukaber, believes the checkpoints will not help.

“It will not bring quiet or security - just more problems. If you look at Jabel Mukaber you will see we suffer infrastructure problems, we almost have no organized streets. These checkpoints only increase the suffering.

"We have 600 students and only 60 classes. The checkpoints cause the buses with the students not be able to enter the village. The students are forced to walk more than a kilometer until they reach buses at the entrance to the village. This is a serious blow to us,” says Avdah.