The government passed on Sunday the contentious Basic Law: Israel as the Nation-State of the Jewish People, a controversial new bill which is threatening to tear the governing coalition apart, in a 14-7 vote, which saw the coalition split in its support for the legislation.

All of Yesh Atid's ministers voted against, as did Justice Minister Tzipi Livni, while all of the Likud, Yisrael Beiteinu and Bayit Yehdui minister voted in favor. Culture Minister Limor Livnat abstained from the vote, and was the sole Likud minister not to follow the party line.

The bill recognizes Israel's Jewish character, institutionalize Jewish law as an inspiration for legislation, and delists Arabic as an official language. The bill is expected to go to the Knesset later this week for its first reading, but its final form is likely to be more moderate. Arab rights groups call it racist, and the attorney general has expressed reservations. 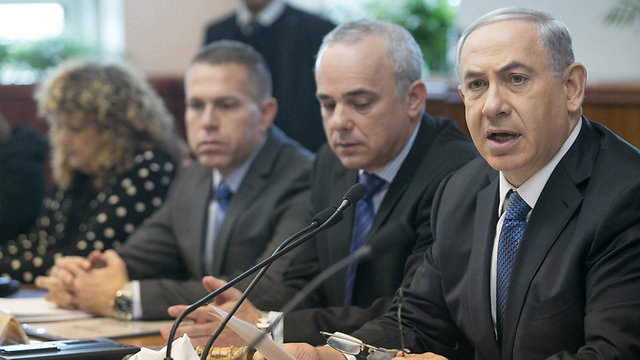 "This is a law that Ben-Gurion and Jabotinksy would have opposed," Yesh Atid Chairman Yair Lapid said, slamming the proposed version of the bill, which is actually two different proposals being voted on one after the other

The cabinet debate took a turn for the dramatic with harsh tones, table slamming, and round-robin attacks from ministers Lapid, Livni, German, Piron, and Peri on Prime Minister Netanyahu for advancing the legislation. "You are proposing legislation which will ruin our democracy. You want a religious state."

"We wouldn't have gotten to this point if Livni had acted otherwise," Netanyahu responded, referring to the justice minister's decision to postpone a ministerial committee debate on the issue. "A feeble policy does not serve the present reality."

Lapid: "Prime minister, not everyone who disagrees with you is weak. Menachem Begin and Jabotinksy would not have been accepted into today's Likud."

Peri: "A proposal of this kind must be thoroughly formulated with consensus, not in a rushed process. I don't understand the urgency for a law of this kind during such a sensitive period. It is not the time."

Netanyahu (shouting): "We are developing a state within a state."

Lapid: "This law will turn 300,000 Russians to second-class citizens." 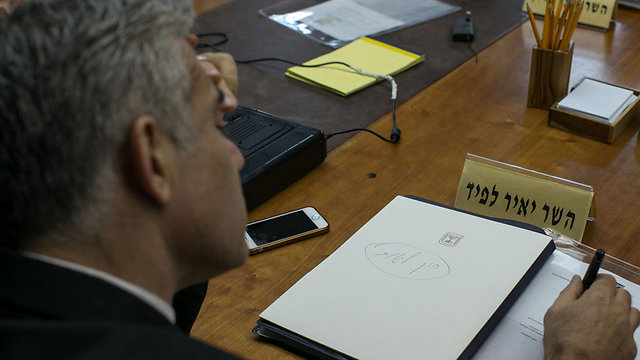 Lapid said his faction did not oppose the essence of the bill, but that the proposals were formulated with the Likud primaries in mind. Both proposals were put forth by Likud MKs and will define Israel as a the Jewish people's nation state, and say the right to national self definition in Israel belongs solely to the Jewish people.

Lapid said he spoke with the family of Zidan Saif, the Druze policeman killed in last week's terror attack, and said: "What will we tell his family, that he is a second-class citizen in the State of Israel because someone has primaries in the Likud?"

On the other hand, Housing Minister Uri Ariel, a rightwing hardliner, defended the bill and told Ynet that Israel "needs this bill now because the Jewish character of the state is being eroded. We need to say things clearly in face of the Palestinians and others within Israel to turn into a bi-national state."

Ahead of the vote, Netanyahu said Sunday that "there are many people challenging the character of Israel as the nation state of the Jewish people. There are some who wish to form autonomies in the Galilee or Negev and thus reject our nationality," Netanyahu said.

The fierier of the two, submitted by Likud MK and Coalition Chairman Ze'ev Elkin, states that Israel is the national homeland of the Jewish people, which fulfills its desire for self-determination according to historical and cultural heritage, and that this right is unique to the Jewish people.

It reinforces the state symbols (the flag, the anthem, and seven-branch candelabrum) and includes a section which states that the Hebrew language is the official language of the country with Arabic only having a "special status." The second one ignores the language issue, and also includes a clause about Israel being democratic. Netanyahu, who also penned a version of his own, which will be voted on at a later date, defended the bill, saying "we have not cut it down by even a word. I put forth the spirit of this law which I believe in. These are the same principles from Israel's Declaration of Independence." 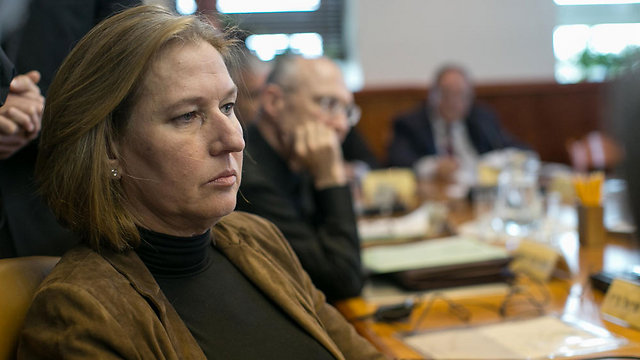 Regarding threats by some from Justice Minister Tzipi Livni's party and Yesh Atid to leave the coalition should the hardliner version of the bill pass, Netanyahu said that "I keep hearing dictums and ultimatums recently. You cannot run a country like this."

The third proposal, submitted by Netanyahu, will not be brought to a vote, as it has yet to be formulated. Netanyahu does not address the language issue and his proposal defines Israel as a Jewish and democratic state, which may lead to fierce resistance from within his own party.

Livni also raised a similar proposal last week. The Livni version also ignores any language-based definition and defines Israel as Jewish and democratic, but it also contains a clause addressing the full equality before the law for all Israeli citizens – setting it apart from the other proposals.

Health Minister Yael German – from Lapid's Yesh Atid party – said "the future of this country and its citizens hang in the balance of this law no passing without safeguarding full equality to all of Israel's cutinizes, regardless of whether Israel is officially defined as a Jewish and democratic state."

Livni will oppose two measures scheduled for a vote tomorrow. "I will firmly oppose any legislative proposal which hurts the values of the State of Israel as laid down in the Declaration of Independence," she said Saturday evening.

Attorney General Yehuda Weinstein has also expressed his opposition to the proposal saying there were fundamental difficulties in the legislation which he could not endorse as the chief legal counselor to the government.

Last week, the justice minister utilized her authority as the chair of the ministerial committee on legislation to postpone debate of the sensitive proposal, after the prime minister expressed his support for the formulation presented to the committee.