Finance minister says his faction opposes MK Elkin's version of contentious law, calling it 'anti-democratic'; Peri: 'We either quit the government, or we get fired.'

The proposal by Likud MK Ze'ev Elkin was approved by the cabinet earlier in the day after fierce verbal clashes between coalition members.

"Yesh Atid and I are not against a nationality law, but not this version of the Nationality Law," Lapid said at Tel Aviv University. "MK Ze'ev Elkin's Nationality Law put the Jewish nature of the state before its democratic nature. (First prime minister David) Ben-Gurion would not have approved this law, neither would Menachem Begin or Ze'ev Jabotinsky. This is an anti-democratic law." 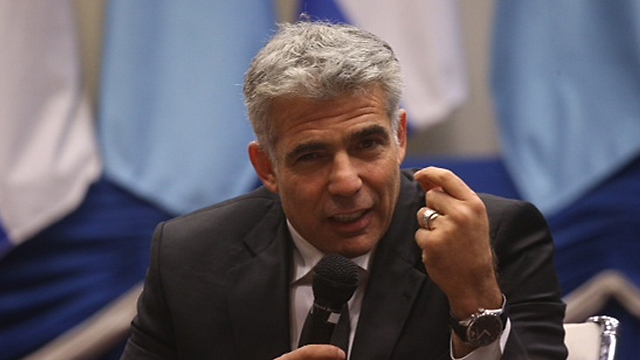 Finance Minister Yair Lapid at Tel Aviv University (Photo: Motti Kimchi)
The bill recognizes Israel's Jewish character, institutionalizes Jewish law as an inspiration for legislation, and de-lists Arabic as an official language. The bill is expected to go to the Knesset later this week for its first reading, but its final form is likely to be more moderate. Arab rights groups call it racist, and the Attorney General has expressed reservations. Yesh Atid officials said the party could not support a proposal that disrupts the delicate fabric of life in Israel between minority groups and the Jewish majority. After pointed criticism from the faction's ministers, Minister Ya'akov Peri said Sunday there are two possible scenarios following the cabinet approval of the bill: "We either quit the government, or we get fired."

"We'll convene and decide where we're heading," Peri said. "The situation is sensitive and fluid. The next 48 hours are going to be very important. This coming Wednesday is a fateful day in the life of this current government." 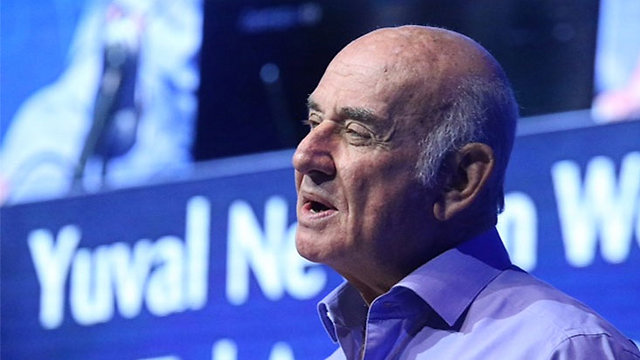 Yesh Atid Minister Ya'akov Peri (Photo: Motti Kimchi)
Peri said that the proposal approved by the cabinet lacks the value of equality and delivers a significant blow to democracy. He added that Yesh Atid could not support a law that hurts Israel's Arab citizens and one that significantly strengthens the legal status of religious Jewish law.

Peri noted that "we are all faced with the responsibility to restore the peace and avoid severely harming the ties between the state's citizens."

Senior officials within Justice Minister Tzipi Livni's Hatnua party said Livni was likely to also decide to vote against the bill proposal in its current version.

Yesh Atid and Hatnua refuse to follow the ruling Likud party's line. On Monday, Yesh Atid chairman MK Ofer Shelah and Hatnua chairman MK Meir Sheetrit plan to demand the coalition leadership to allow them to vote against the coalition, just as Bayit Yehudi had done several weeks ago on the issue of conversion.

Officials in Likud believe that the coalition could fall apart over the vote on the bill on Wednesday, however, Livni and Lapid had yet to make a decision on whether or not to quit the government.

Other officials said a compromise could be made if a majority in favor of the proposal - without the objecting ministers and with the help of supporting MKs - can be achieved. MKs from Hatnua and Yesh Atid are not likely to support this option, and are likely at present to oppose the proposal either way.

The cabinet debate took a turn for the dramatic with harsh tones, table slamming, and round-robin attacks from ministers Lapid, Livni, German, Piron, and Peri on Prime Minister Netanyahu for advancing the legislation.

The fierier of two proposals, submitted by Likud MK and Coalition Chairman Ze'ev Elkin, states that Israel is the national homeland of the Jewish people, which fulfills its desire for self-determination according to historical and cultural heritage, and that this right is unique to the Jewish people.

It reinforces the state symbols (the flag, the anthem, and seven-branch candelabrum) and includes a section which states that the Hebrew language is the official language of the country with Arabic only having a "special status." The second one ignores the language issue, and also includes a clause about Israel being democratic.

Netanyahu, who also penned a version of his own, which will be voted on at a later date, defended the bill, saying "we have not cut it down by even a word. I put forth the spirit of this law which I believe in. These are the same principles from Israel's Declaration of Independence."

The third proposal, submitted by Netanyahu, will not be brought to a vote, as it has yet to be formulated. Netanyahu does not address the language issue and his proposal defines Israel as a Jewish and democratic state, which may lead to fierce resistance from within his own party.

Livni also raised a similar proposal last week. The Livni version also ignores any language-based definition and defines Israel as Jewish and democratic, but it also contains a clause addressing the full equality before the law for all Israeli citizens – setting it apart from the other proposals.