Rivlin: What is the point of the 'Nationality Law'?

President says rather than cement Jewish nature of state, the proposal 'encourages us to seek contradiction between the Jewish and democratic characters of the state.'

President Reuven Rivlin on Tuesday harshly criticized the 'Nationality Law' proposal that has shaken up the government, wondering "what is the point of the proposed law – Israel: The National State of the Jewish People?"

"Does promoting this law, not in fact, question the success of the Zionist enterprise in which we are fortunate to live?" the president said at the Annual Conference of the State Prosecutor in Eilat.

"Does this proposal, not in fact encourage us to seek contradiction between the Jewish and democratic characters of the state? Does this bill not in fact play into the hands of those who seek to slander us? Into the very hands of those who wish to show, that even within us, there are those who see contradiction between our being a free people in our land, and the freedoms of the non-Jewish communities amongst us?" 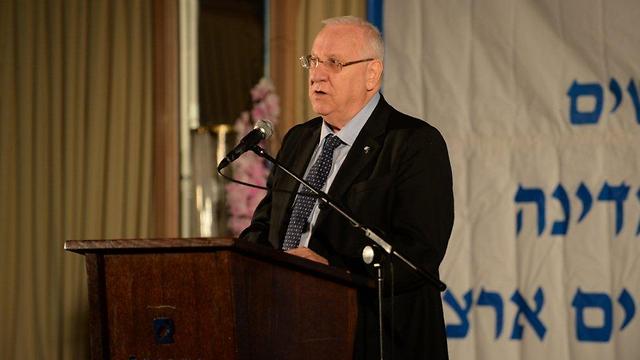 Rivlin at the Annual Conference of the State Prosecutor in Eilat (Photo: Shmuel Adler)
The president went on to say that "such a hierarchical approach, which places Jewishness before democracy, misses the great significance of the Declaration of Independence, which combined the two elements together – without separating them."

"Therefore, the declaration not only determines the complete equality of social rights for all its citizens, but religious, language, educational and cultural rights. The founding fathers of the State of Israel, envisioned a state whose Jewish nature and democratic nature, were as one." As an example, Rivlin mentioned the instance in which former president Chaim Herzog, then the Israeli ambassador to the UN, tore up a resolution equating Zionism and racism on the podium at the UN General Assembly. "Herzog ripped up an improper and distorted decision, which sought to attribute to the Zionist enterprise the very injustices which Zionism itself had righted," Rivlin said. "And yet, even then, as Chaim Herzog was speaking out against those who dared to question the moral basis for our right to self-determination, the leaders of Israel did not see fit to respond to the authors of the shameful UN resolution with attempts to pass laws regarding the superiority of the Jewish nature of the state."

Rivlin was addressing both lawmakers and Israeli citizens, saying that "Our combined efforts must be invested not in drawing differences between Judaism and democracy, but in the mutual development and empowerment to be found where they meet."

Attorney General Yehuda Weinstein, who has already expressed his reservations to the proposed legislation, also spoke at the conference, saying the basic law proposal "will affect the life of every citizen and resident in the country, as well as Israel's foreign relations."

Weinstein noted the bill proposals introduced by MKs rather than cabinet members "contain fundamental and meaningful difficulties and this is why I believe it is not fitting for the government to support them."

He asserted that this kind of law should be passed by the government rather than Knesset members.

The extreme wording of the draft formulated by coalition chairman Ze'ev Elkin, which touches on the most explosive issues, led to the turbulent government meeting, raised voices, and, according to coalition officials, even to a 48-hour period in which the very survival of the government was in question.

Elkin's proposal also institutionalizes Jewish law as an inspiration for legislation, and delists Arabic as an official language.

On Monday, coalition members agreed to postpone the Knesset-wide vote planned for Wednesday.