Pope: I fear an escalation in the Holy Land

Pope Francis is following with concern the events in Israel and warns of a religious war; 'I condemn all violence in the name of God,' he says. And in his first wide-ranging interview to the Israeli media, the pontiff appeals to Israelis and Palestinians to 'put an end to hatred.'

These are difficult days for Pope Francis. He is concerned about the situation in Jerusalem, fears for the fate of Christians in Iraq and Syria, and is worried also about the future of Europe.

"I utterly condemn any kind of violence in the name of God," the pontiff says in an exclusive interview, when asked about the massacre at the synagogue in Jerusalem and the rise in terrorism of recent weeks.

"I am following with concern the escalation in Jerusalem and other communities in the Holy Land, praying for the victims and appeal from the bottom of my heart to the parties to put an end to hatred and violence," he says. "Building peace is hard, but living without peace is a nightmare." 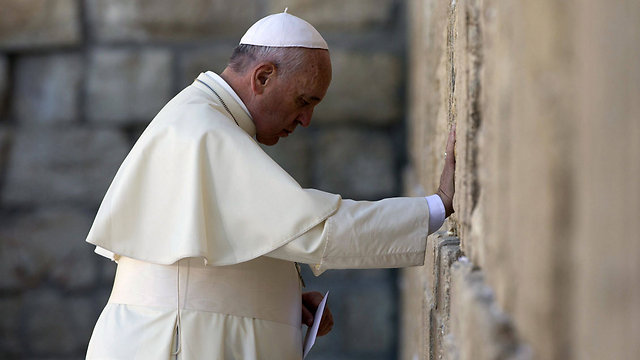 Pope Francis at the Western Wall in Jerusalem in May. (Photo: AFP)

In his first wide-ranging interview to the Israeli media, which will appear this weekend on Ynet, Francis says the Christian minority in the areas held by the Islamic State as is in the worst condition it has ever been.

"In Iraq, for example, barbaric acts - criminal, indescribable - are being carried out. Persecution of Christians today is more serious than in the early days of the Church," he says. "The cries of the Christians, Yazidis and other ethnic communities demand a clear and bold stand both from religious leaders, especially Muslims, and political leaders."

"Anti-Semitism is a sin," he says, highlighting that Jesus was born and died a Jew. "You cannot be a true Christian if you do not accept its Jewish roots. People must always remember that Christianity flourished from Judaism."

The pontiff made his first official visit to the Holy Land earlier this year, meeting with political and religious leaders in Jerusalem and Bethlehem. 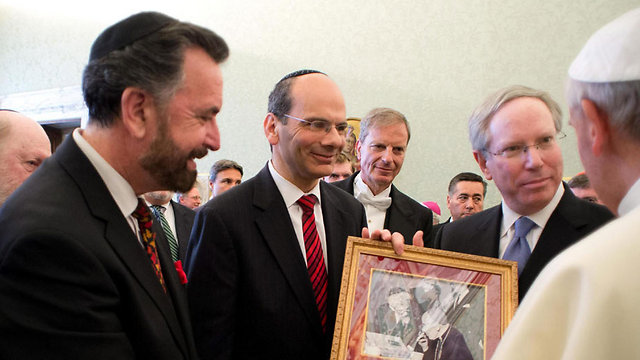 The Pope meeting with Jewish leaders at the Vatican. (Photo: EPA, OSSERVATORE ROMANO)

Francis is warm and cordial, full of stories and anecdotes. He is an ardent soccer fan who regularly carries in his pocket a photograph of his favorite Argentine team San Lorenzo. It is no wonder that he is considered, according to polls, the most popular personality in the world today.

His sense of humor is also evident when he illustrates the special relationship between Judaism and Christianity. Talking with clerics, he likes to tell of a group of anti-Semitic priests who were speaking against the Jews in a room in which a picture of Jesus and Mary was hanging on the wall:

"And then, suddenly, Jesus steps out of the picture and says, 'Mom, let's go, they don't like us here either.'"

The full interview will appear this weekend on Ynetnews.