Has Netanyahu made deal with Haredi parties?
Photo: AFP

Haredim demand Netanyahu include them in next gov't

Ultra-Orthodox lay groundwork for next elections, demanding Netanyahu give them written commitment they will have place in next government, take sting out of Haredi enlistment law in exchange for their support.

The two main Haredi parties have reportedly said they will support Prime Minister Benjamin Netanyahu in the next elections, on the condition he promises not to form a government without with them, in what is the clearest sign Israel is heading to a national elections.

The parties made a list of political demands in return for their future support, including the demand they have a seat in his next government. The news as well as the demand list was confirmed to Ynet by a senior ultra-Orthodox political figure. 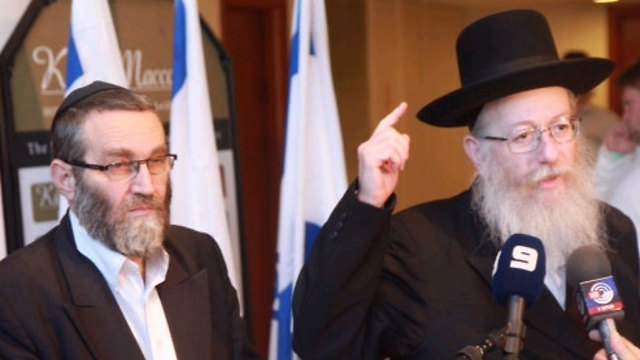 Haredi MKs Moshe Gafni and Yaakov Litzman (Photo: Motti Kimchi) (Photo: Motti Kimchi)
In Israel's electoral system, after the general ballot is held, the different parties give the president their recommendation regarding who should form the next government. The person leading the party with the most recommendation is usually Israel's next prime minister. The two main Haredi political parties - the Ashkenazi United Torah Judaism and the Sephardic Shas - vowed to give Netanyahu answer regarding their joint support in the upcoming days; and with it, Netanyahu's continued rule is almost ensured, regardless of the number of Knesset seat's the Likud wins in a future vote.

However, the support comes at a price, a written commitment to include them in any government he forms as well as assurances he would end financial and criminal sanctions against Haredi draft-dodgers, give more funding for seminaries and greater benefits for families with a large number of children.

"These are our central demands," a top United Torah Judaism official confirmed for Ynet, adding that "this time we will ask for a written agreement, no more verbal contracts signed with smiles and winks." Some Haredi politicos claim they fear Netanyahu will attempt to hoodwink them by enjoying their support during the election campaign, only to leave them out of the government when the time comes.

According to the source, this list of demands is an "attempt to reunite a couple who have already lost faith and even fell apart after a betrayal. It's not simple. If there will be a written commitment then we will recommend Netanyahu form the next government. As of now, no such writ exists."

On Thursday evening reports in Haredi media claimed the parties had agreed to support Netanyahu Shas Chairman Aryeh Deri however rejected the claim, saying "nonsense, nothing has been agreed." However, in a radio interview, Deri insinuated he was willing to clean the slate with Netanyahu. Recent months have seen a spur in rumors about an early election. The most prominent signs indicate elections can be expected is Netanyahu's move to cement his leadership of the Likud party, which would allow him to focus his energies on any future elections. A number of contentious bills and issues have also been gnawing at the shaky collation, some of which could serve could serve as a catalyst for the process. One such example, is the Jewish nation state bill, which has already pitted centrists against rightist, and could serve as a pretext for either side choosing to dissolve the coalition and save face.