President Recep Tayyip Erdogan of Turkey has made a plethora of controversial comments.
Photo: Associated Press

Turkish President has raised eyebrows around the world with his outlandish comments abroad but strikes a chord with conservative Turks at home.

Turkish President Recep Tayyip Erdogan has raised eyebrows around the world with a series of outlandish comments but while his remarks sometimes cause bafflement abroad they strike a chord with many conservative Turks at home.

In the last month alone he has declared that Muslims discovered the Americas before Columbus and that women are not equal to men. But these were just the latest headline-grabbing declarations from Erdogan over a long career of controversy. 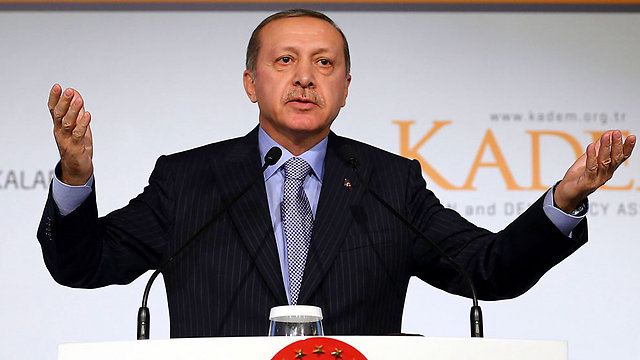 He rarely backtracks on a statement and in the two most recent cases has come out fighting, accusing Western media of distorting his remarks and insisting he was right in the first place.

"Just because I repeated a fact based on scientific research, I have been targeted by the Western media, and the foreigners inside us, who suffer from an ego complex," he said Thursday in response to the controversy over the Americas comments.

But while the statements embarrass some inside Turkey and cause consternation abroad, analysts say they are aimed at impressing his core conservative support base that helped him win the August presidential election.

"Most Turkish voters, given the level of their education, enjoy it when a Turkish leader locks horns with a foreign power," said Adil Gur, head of the A&G polling group.

"The highly-educated voter may ask questions about how these statements are seen abroad but the average voter does not and they approve."

But the frequency and intensity of Erdogan's broadsides is now starting to cause concern even in places where he could normally count on fervent support.

"He must think about speaking out less because, even if he is right, the way he talks gives rise to endless polemics," said Mehmet Barlas, commentator for the pro-government Sabah newspaper.

Here are the most famous Erdogan statements:

November 15, 2014: Erdogan said Muslim explorers made it to the New World before anyone else.

"Contacts between Latin America and Islam date back to the 12th century. Muslims discovered America in 1178, not Christopher Columbus."

'Women not equal to men'

November 24, 2014: Erdogan caused an outcry by saying women and men are not equal.

"Our religion (Islam) has defined a position for women (in society): motherhood. Some people can understand this, while others can't. You cannot explain this to feminists because they don't accept the concept of motherhood."

November 3, 2014: On a visit to a district of Istanbul, Erdogan personally upbraids a member of the public for breaking the law on smoking in a public place.

"This shameless guy is sitting there and keeps smoking even after the president tells him not to do so."

July 19, 2014: Erdogan launched a bitter attack against Israel amid its air campaign against Gaza.

"(Israelis) have no conscience, no honor, no pride. They curse Hitler day and night, but they have surpassed Hitler in barbarism."

September 28, 2014: Erdogan ridiculed the fuss over the new iPhone 6, saying it is the same as the last.

"This brand brings out a new model pretty much every year. But in fact it (the iPhone 6) is not really different from last year's version," he said.

"We will wipe out Twitter. I don't care what the international community says. They will see the Turkish republic's strength."