20-year-old unemployed man arrested for 'preaching Judaism' after newspaper publishes his picture with Star of David on his body, clothes.

“The convert is in the hand of security forces,” was one of the headlines in the Kuwaiti Al-Rai Newspaper on Monday morning, which published a story this week about a 20-year-old unemployed local who proudly sported clothing and tattoos with Jewish symbols.

Police received complaints the man was “preaching Judaism,” and the local press demanded an investigation to be conducted. Kuwaiti authorities were able to identify the man and arrested him this week. 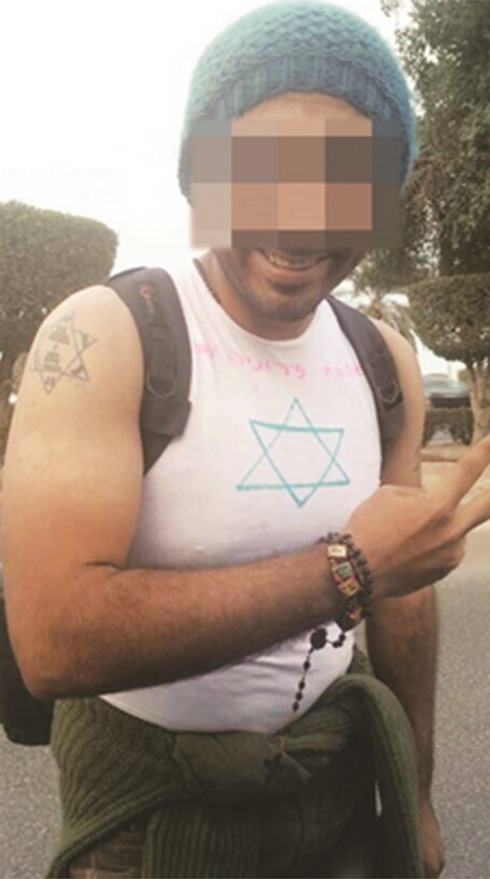 The Kuwaiti man who was arrested for sporting a Jewish Star of David tattoo.

In Kuwait, it is illegal to convert from Islam to any other religion.

The first complaint against the man was received a few days ago by the Kuwaiti Interior Ministry. The person who filed the complaint said the man, a resident of Kuwait City, had a Star of David on his arm and also had the Jewish symbol drawn on his shirt.

The man who filed a complaint also said that the unidentified man had uploaded videos to the internet in which he allegedly preached Judaism. “I am Kuwaiti, Christian, Catholic and Jewish,” said the man in the video and added, “whoever wants to take a picture with me, it will cost a dinar and a half.”

The authorities did not rush to launch an investigation in the beginning.

Later, it turned out the complaint had been obtained by a female officer in the police operations room, who explained she did not know that wearing Jewish symbols was against the law and must be dealt with.

However, when the story about the man was published in the Kuwaiti newspaper, the authorities quickly tracked the man down and arrested him.

A similar case was published in Egyptian media in March. Egyptian authorities arrested a 24-year-old man in the Sohag Governate in southern Egypt, who according to reports had a tattoo of the Star of David on his arm.

The young man was suspected of treason, as it was suspected he had contacted Israeli citizens through Facebook and added “Israeli pages” to his account such as pages related to the Mossad and the IDF Spokesman.

The Egyptian Al-Yawn al-Sabi newspaper reported that the man had criticized the Egyptian government and tried to enter Israel through Sudan.

Police found a Hebrew dictionary at the man’s home and it was also reported that the suspect had visited the Israeli embassy in Cahir and tried to get a visa to Israel claiming he wanted to visit Jerusalem, but was unsuccessful.