Israel might be heading for elections sooner than expected after an explosive meeting between Prime Minister Benjamin Netanyahu and Finance Minister Yair Lapid Monday night, which was meant to address the coalition crisis threatening the fragile alliance.

Netanyahu told Lapid that he could not govern under the current reality, in which the Yesh Atid chairman and his faction members constantly criticize the government of which they are members. 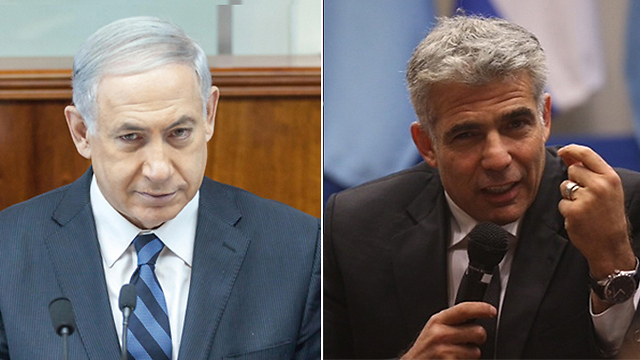 The prime minister presented Lapid with five conditions for maintaining the current coalition:

After the meeting, Netanyahu released a statement defending his actions during the latest crisis in his administration.

"The people of Israel placed the responsibility on me, but with this coalition it is impossible to govern the country as its citizens expect. If the unprecedented conduct from some of the ministers continues, there will be no escaping from going to the polls."

Netanyahu stressed that he was not eager to embark on an election campaign.

"This is not what I would prefer, but a worse possibility is conducting a government in which the ministers sabotage its actions and policies against the interests of the public."

The sitting prime minister, in his third term as Israel's leader, said "dragging the country through a reality in which government ministers constantly undermine its actions is a worse alternative."

Sources in Yesh Atid were quick to accuse Netanyahu of arriving "ready to blow up the meeting." Dubbing it a "meeting just for show," the Yesh Atid sources asserted Netanyahu had set the meeting not intending to solve any of the issues.

"The prime minister's demands of Yesh Atid expose his obvious political interests and his obligations to the members of the Likud party, to foreign interests and to politicos.

"The prime minister prefers dragging the entire country to unnecessary elections that would paralyze the economy, burden the market, stop all reforms planned to benefit Israeli citizens and deprive young couples in Israel of the opportunity to buy an apartment of their own when the 0% VAT plan goes into effect," the party accused.

"There's no reason for Lapid's refusal to give the IDF the minimal budget required for its regular operations, as was decided by the government, and there's no reason for his insistence on the 0% VAT plan, which most experts believe will only benefit the contractors," Elkin said.

Sources from Yesh Atid also criticized Netanyahu, calling his public declarations of that he wanted to continue with his current coalition "a bluff."