New images from last month's deadly terror attack at the Bnei Torah synagogue in the Har Nof neighborhood of Jerusalem show policemen shooting the terrorists as they emerged from the synagogue after slaying four worshipers.

The attack claimed the lives of Rabbi Avraham Shmuel Goldberg, Rabbi Kalman Levine, Rabbi Moshe Twersky and Kupinsky Aryeh inside the synagogue and that of Master Sergeant Zidan Sif outside. 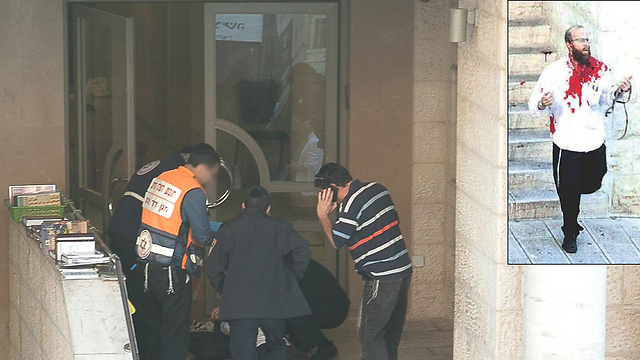 Gunfire in house of worship

The first indication of the attack came from a local boy who heard a commotion at the synagogue.

"My son woke me two minutes before 7 in the morning. He said he heard shots from the synagogue and saw people running out," said amateur photographer Zohar Ross, who lives in the building next door.

"I ran to the balcony, and the first thing I saw was Shmuel Goldstein (see inset) running out and shouting: 'there’s a massacre inside.’ I told my wife to call the police and grabbed my camera."

As local residents gathered at the entrance to the synagogue, they saw bleeding worshipers emerge and quickly realized that this was only part of its devastation inside. 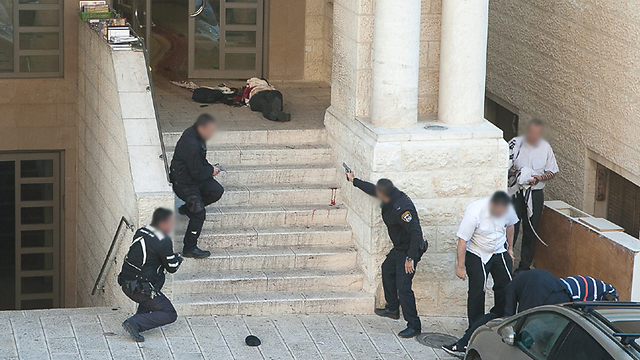 The initial report was brief: Shots on Agassi Street. Traffic policeman Itzik Weizmann arrived at scene, drew his gun and began to climb the stairs to the entrance. To his right, fellow traffic cop Zidan Sif also drew his gun and took up a corner position.

"They're out of ammo," claimed bystanders, "they have only knives and axes."

Weizmann nodded and was about to enter the synagogue - but then there was a shot. He stepped back, he saw the terrorists moving inside the synagogue, and squeezed the trigger twice, but the bullets missed their target. The terrorists turned toward the exit – prepared for a face-to-face fight. 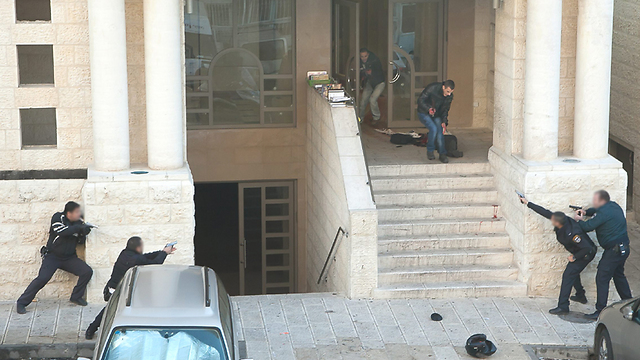 The first bomber emerged from the synagogue, brandishing a large knife - the one he had used in the massacre in the prayer hall. Armed only with the knife, he started running toward Sif. The police, in response, opened fire at him.

"I ducked behind the railing of my balcony and kept taking photos," Ross said. "There was an exchange of fire, and the first terrorist fell and was killed."

But behind him the second terrorist was waiting. 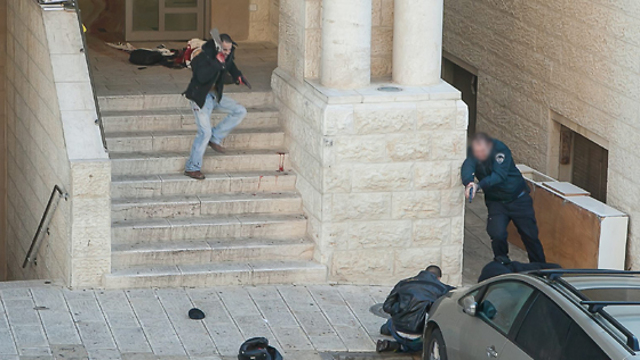 "Allahu Akbar," shouted the second terrorist as he emerged from the synagogue. In his left hand he held a pistol, and with his raised right hand he waved a blood-stained butcher’s knife.

As he looked down the steps of the synagogue to Agassi Street he met Sif’s eyes. He coolly aimed his gun the officer and the police opened fire.

"I was so focused on documenting this inferno," Ross said, "I did not even realize what horror was unfolding in front of me. But I felt I had to photograph the terrorists, in case they managed to escape." 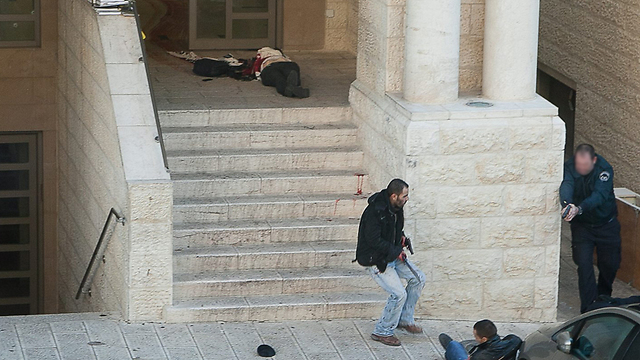 It all happened very quickly. Within seconds, the terrorist was a meter from the Sif, face to face, both with guns drawn. Bullets whistled around them, and the terrorist was most likely wounded by the time he reached the sidewalk, and saw his friend lying there.

Another split second passed, and two more people lay on the sidewalk – Sif and the second terrorist. Even now, the police cannot say for sure who fired the bullet that fatally wounded Sif in the head, whether it was terrorist or a fellow officer. 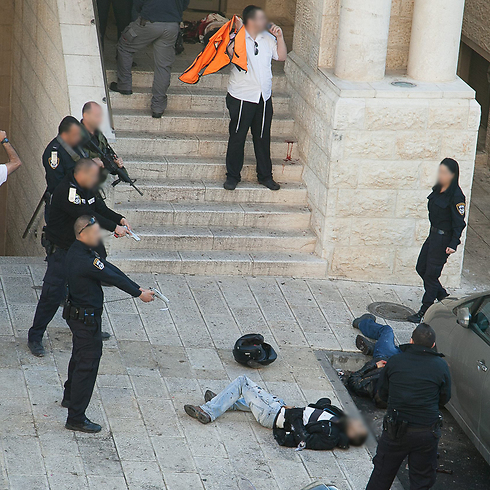 The bodies of the terrorists are sprawled on the sidewalk, the knives and gun used in the massacre lying beside them. The police gather around them, still with guns drawn, ready for any development. 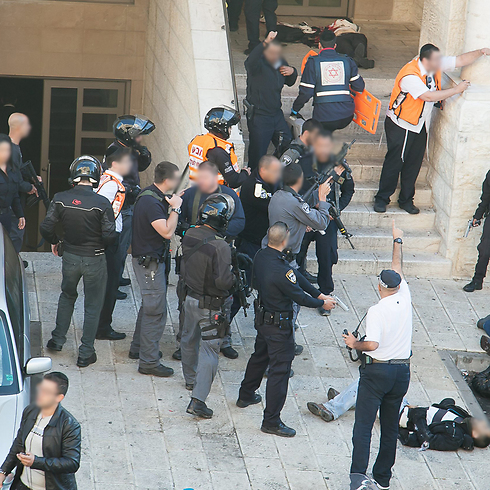 Police officers and Magen David Adom teams start making their way into the synagogue, where they discovered the extent of the tragedy - blood spattered on the walls and prayer books, the bodies of the worshipers and their wounded friends. The incident was over, the terrorists dead and the wounded receiving primary care - but the shock and outrage at the attack had just begun.

The two terrorists, cousins Ghassan and Uday Abu-Jamal from Jabel Mukaber, arrived at the synagogue on the morning of November 18 in a Skoda, walked to a playground and waited until the synagogue filled up with worshipers. 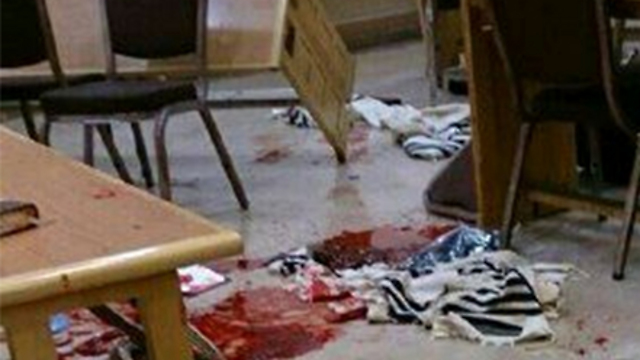 The aftermath of the attack.

The terrorists entered the synagogue at 6:55 am, near the end of the "amidah" prayer, which is recited standing up. One of them started shooting at worshipers, while the other used a butcher's knife to slash throats. At 7:01 am, one of the congregation managed to escape and alerted the police to the ongoing attack.

According to the state's response, the officers arrived at the scene of the attack at 7:08 am, seven minutes later. As show above, one of the terrorists stepped out of the synagogue and was shot by the officers. The second terrorist then walked out, and, following what was an apparent shootout with police, was also shot.

The state noted in its response that the houses are to be demolished for deterrence purposes during a particularly tense security period.

In the response it was specified that the description was a "technical account of an atrocious crime, well planned by the terrorists, in which the terrorists tried to kill worshipers inside a holy place; a brutal massacre which led to the death of four civilians and an innocent policeman, and the wounding of others." 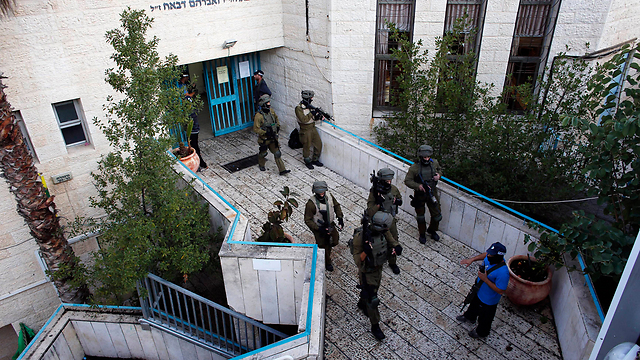 Security forces at the site of the attack (Photo: Reuters)
The state's response, filed by attorney Yochi Gnessin, emphasized that there was a clear need to deter residents of East Jerusalem, from which emerged several terrorist who carried out recent attacks, particularly due to the fact that have no known ties to terrorist organizations. This causes, the response noted, an "inherent difficulty in thwarting the attack ahead of time."

Regarding allegations about the illegality of the move, Gnessin referred to previous rulings of the Supreme Court that authorized similar demolitions.