'For every action there’s a reaction,' says Khaled Mashal in interview, saying terror fueled by Palestinian despair: We warn against stripping Palestinian people of hope.

Khaled Mashal, chief of Hamas' political bureau, told British network Sky News that the Prime Minister Benjamin Netanyahu was responsible for the recent increase in terror attacks in Israel, which he said was a "spontaneous" reaction by Palestinians.

The comments seem to indicate Hamas is trying to fan the flames of recent tensions, but is not actively taking credit for the recent string of terror attacks, most of which were conducted by what some are calling 'lone-wolf' terrorists. 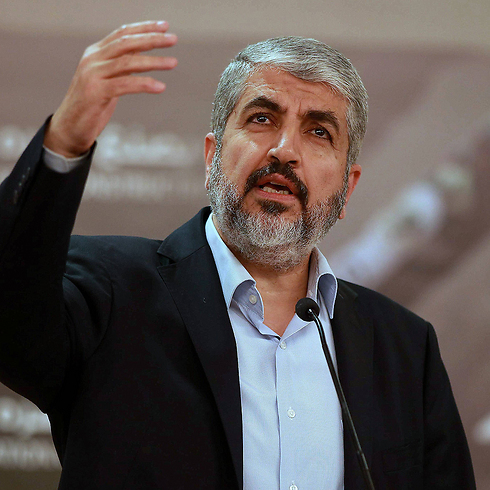 Khaled Mashal (Photo: AFP)
"Netanyahu is playing with fire when he allows members of his government, the Knesset, and the extremists to repeatedly storm the Al Aqsa mosque - that’s dangerous.

"Our fight, is a national fight, but Netanyahu is turning it into a religious fight. He bears responsibility for the consequences of what is happening," Mashal said.

For full transcript of the Sky News interview with Khaled Mashal

When asked about the deadly terror attack on a Jerusalem synagogue, in which four rabbis and a Druze police officer were murdered, Mashal again blamed Netanyahu, saying Palestinians have lost hope and were thus being pushed to the religious extreme. "Netanyahu is responsible for the killing of the Israelis first, and the Palestinian deaths that followed, because of what is being committed against our people and for them not having hope on the horizon for a just settlement of the Palestinian cause," Sky quoted him as saying. Mashal maintained the current round of violence was organic: "The Palestinian people no longer have anything to lose. In light of the continuation of the occupation and settlements, stealing the land, the attacks on women and children, and the Holy sites. This is spontaneous. The reaction is spontaneous — from the young Palestinian men and young Palestinian women." Though he said Hamas was committed to the two-state solution, he said they would not religniush arms until a Palestinian state was established, and slammed Palestinian President Abbas' ongoing security cooperation with Israel. "(At one level) the Palestinian-Israeli security cooperation is unacceptable, to the public and on the national level, especially in light of what the Israeli occupation is doing through its continued acts of aggression. In light of the dead-end on the political horizon, there has to be a change in the instruments used by the Palestinians," he said, insinuating the Palestinians would better benefit from a renewed focus on armed resistance, a position which Abbas has actively strived to replace with peaceful and diplomatic moves. Though the Hamas political leader said the terror group was committed to a Palestinian national unity government, which he described as a "national necessity", he sounded veiled criticism of Abbas, Sky reported.  "He has positions which satisfy Western and American standards. And with all this, what has Netanyahu done in return? Nothing. Therefore the problem is not the Palestinian position, whether from Fatah or Hamas, or the leadership, the fault is Netanyahu's position." Mashal also praised a recent string of symbolic votes in the French and UK parliaments supporting the recognition of a Palestinian. He called the votes an "excellent developments", saying that "the world has started understanding the justice of the Palestinian cause." Hamas issued a statement on Sunday urging Palestinian factions to resume the dialogue between them regarding the future of the Palestinian unity government, noting that decisions regarding changes to its composition are subject to national consensus.

On Tuesday, the government's six-month term will expire, after which elections are to be held for the Palestinian presidency and the legislative council.