Brooking Institute survey finds majority of Americans support Israel, but not settlements; six in 10 Americans believe Israeli-Palestinian conflict one of top issues for US national security.

WASHINGTON – Despite the strained relations between Prime Minister Benjamin Netanyahu's government and US President Barack Obama's administration, a solid majority of Americans continue to support Israel – but not without reservations. A survey conducted by the Brookings Institute ahead of the 11th annual Saban Forum showed a marked rise in American support for a bi-national state with equal rights, if the two-state solution is unattainable. The Saban Forum, which opens Friday night, will host former secretary of state Hillary Clinton, Vice President Joe Biden, and Secretary of State John Kerry; Prime Minister Netanyahu will join via live telecast from Jerusalem. 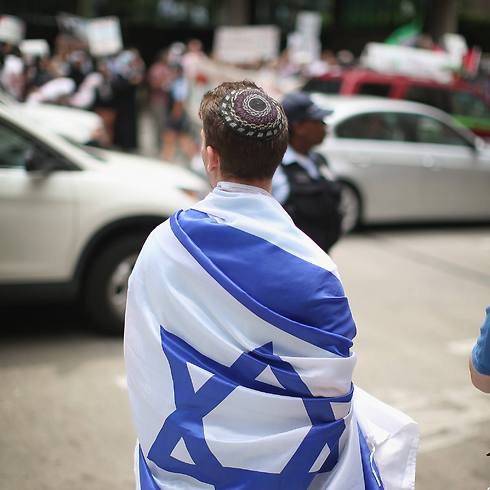 American Jew at rally for Israel in Chicago (Photo: AFP)
With the survey finding that six in 10 Americans believing the Israeli-Palestinian conflict is one of the five most important issues to the national security of the United States – and elections looming after a recent wave of violence in Jerusalem – the forum intends to explore how the US can influence Several senior Israeli officials will also take the stage, including Economy Minister Naftali Bennett, Opposition Chairman Isaac Herzog, former justice minister Tzipi Livni, former military intelligence chief Amos Yadlin, former IDF chief of staff Gabi Ashkenazi, former ambassador to US Michael Oren, and others. The senior US administration officials scheduled to appear include Senior Advisor to the President Valerie Jarrett and White House Coordinator for the Middle East Philip Gordon. 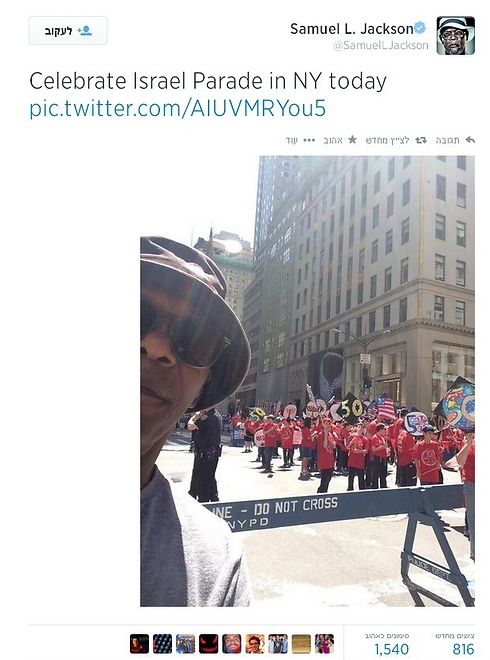 Samuel L. Jackson at the Israel Parade in New York

The survey, conducted by University of Maryland professor Shibley Telhami, sampled 1,008 Americans. It found that the percentage of Americans who wish their government would pursue the two-state solution was unchanged from the previous year, at 39 percent.

If the two-state solution were to fail, however, two-thirds of those polled said they would support a bi-national state. Support for the one-state solution rose by 10 percent, up to one in three Americans. The survey found that 84 percent of Democrats and 60 percent of Republicans polled preferred one democratic state over a state in which Arabs do not enjoy equal rights. When asked if the United States should lean towards one of the sides to the conflict, 31 percent responded with an affinity to Israel compared to a mere four percent for Palestinians – though a solid majority of 64 percent preferred the US remained neutral.

Ma'ale Adumim settlement near Jerusalem (Photo: Reuters)
The question revealed the extent of the partisan divide on the contentious issue of support for Israel, with 77 percent of Democrats preferring neutrality and only 17 percent supporting Israel, while 51 percent of Republicans cast their lot with Israel and 46 percent advocated neutrality.

According to the survey, Americans also show marked opposition to settlement building, but do not support sanctioning Israel. Two of three Americans oppose the construction in the West Bank, with 34 percent in favor.

Three in four Democrats opposed the settlement enterprise, in agreement with a slight majority of 51 percent of Republicans. However, 61 percent oppose sanctions on Israel, with 39 percent favoring either sanctions or other steps to pressure the country. When asked about their primary concern regarding the Israeli-Palestinian conflict, 31 percent said human rights, 24 percent prioritized US interests, and 14 percent expressed worry for Israel.