IDF says it proposed to Palestinian officials they conduct joint investigation into Abu Ein's death; 'This is a terrorist army', Ziad Abu Ein is heard shouting in video that shows only partial glimpse of events that led to his death.

A video aired Wednesday documenting the events earlier today in the West Bank town of Turmus Ayya ostensibly assists in shedding light on the incident in which a Palestinian Cabinet member, Ziad Abu Ein, died shortly after he and other protesters scuffled with Israeli troops. However, it offers only a partial glimpse of the events that led to his death. It is evident that the video was edited; some of the recorded parts were omitted and in no point can Abu Ein's collapse be clearly linked with his confrontation with the security forces.

Hours after the incident, the IDF said that the incident is still under inspection. Abu Ein's funeral will be held on Thursday.

Watch the video of the Palestinian Minister's altercation with Israeli troops:

Coordinator of Government Activities in the Territories (COGAT) commander Maj. Gen. Yoav Mordechai, said that Abu Ein's body will undergo an autopsy attended by Palestinian, Jordanian and Israeli pathologists. In addition, the IDF put forward an offer to the Palestinians to establish a joint investigation team to review the incident. 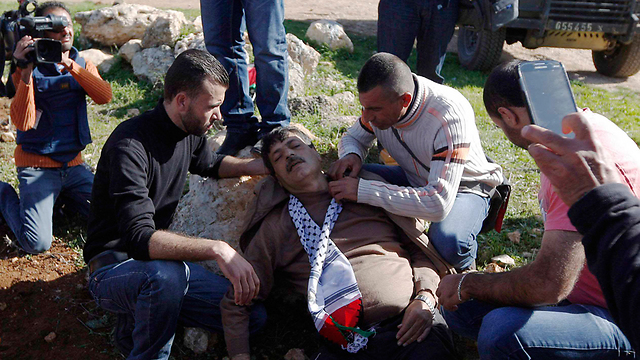 Abu Ein after he collapsed, in the West Bank (Photo: Reuters)

Abu Ein, a Palestinian Authority cabinet minister with responsibility for the settlements and the separation fence, collapsed and died in the afternoon hours. Palestinian sources claimed the minister, who reportedly suffered from an unspecified illness and which could have played a role in his death, had been hit in the chest by the butt of a soldier's gun, and then collapsed. However the circumstances of his death remain unclear, and the possibility is being examined that the minister suffered a heart attack.

Video from the incident shows Abu Ein sat on the ground after the clash, holding his chest – however, the reason why is still unclear. Palestinians claim that he had inhaled tear gas. The video is then cut off and footage from moments before his collapse are shown, in which Abu Ein gets up and walks towards an IDF jeep, where a confrontation develops between him and one of the soldiers. 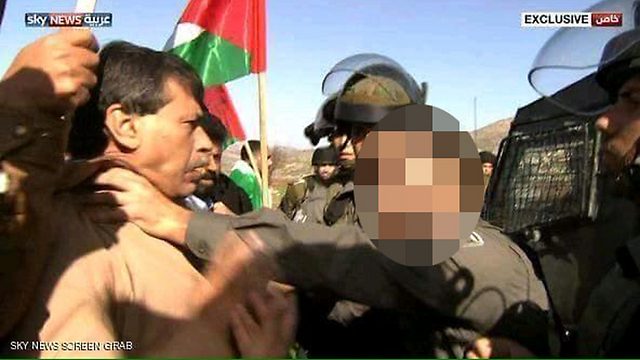 Abu Ein is later heard shouting in Arabic, "this is the terrorism of the occupation, this is a terrorist army, practicing its terrorism on the Palestinian people," he told the official Palestine TV. "We came to plant trees on Palestinian land, and they launch into an attack on us from the first moment. Nobody threw a single stone."

At this point the video is again cut off and the soldiers are shown throwing stun grenades that explode, causing the Palestinians to step back. Abu Ein is not filmed in these moments. Later he is shown while giving an interview, clutching his chest. He struggles to talk, but says that "the IDF is a terrorist army that commits terrorist acts against the Palestinian people's rights. We came to Palestinian land to plant olive trees and they have been acting with aggression from the start. No one threw stones."

There is then another break in the video and Abu Ein is shown to be carried by several men, while it is unclear if he was conscious at the time.

Abu Ein, who suffered from medical problems, served in the previous government as Palestinian deputy minister of prisoner affairs. He is a prominent figure in the Palestinian society and is well known in Israeli circles. 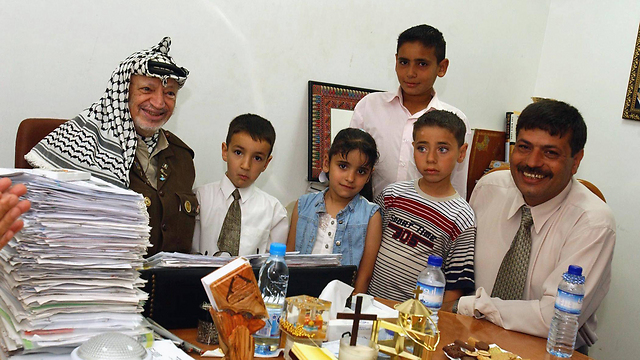 Hamas said that it "mourned" Abu Ein's death, and called on the Palestinian Authority to end its cooperation with Israel in response.

Born in 1959, Abu Ein was first detained for security-related offenses at the age of 18, for a short period. In 1979, he was accused of belonging to a cell that planted a bomb in Tiberias that exploded and killed two people, including 16-year-old Boaz Lahav. He was extradited to Israel from the United States two years later and received a life sentence, but was released in a 1985 prisoner exchange, and never admitted to the charges.

A military source said that Abu Ein had organized the protest, and that according to the plan, the demonstrators were to plant trees near Adei Ad, an Israeli outpost in the West Bank.

"Abu Ein arrived 20 minutes before the protest, in which the forces set up a line to prevent a confrontation. At some point a minor confrontation began. Suddenly we understood that someone had collapsed, the same man shown in the videos," the source said, adding that a paramedic had offered to help him.

The IDF source stated that the issue is still under investigation, and that there is a need to question all soldiers involved in the incident.

"We are looking at the facts and investigating the troops to determine the level of confrontation. COGAT agreed on a jointly conducted autopsy, but we have not yet agreed on a joint investigation. A dialogue is being held between COGAT and the Palestinians and we have not received an official notice regarding the termination of cooperation with them."

The military source further said that riots have begun to break out in the Al Jalazun Refugee Camp. The source added that as of now, following an examination of developments taking place on the ground, there is no intention of reinforcing preparedness activities.