Family, bystanders wounded near Jerusalem after Palestinian throws acid at them; terrorist shot after attempting to flee scene, seriously wounded.

A terrorist threw acid on seven Israelis in the West Bank on Friday, including a mother with her three young daughters and her niece. Two other pedestrians were wounded in the attack. The Palestinian suspect then chased another Israeli with a screwdriver and was shot by an armed passerby.

IDF and border guard forces subdued the terrorist, who was transferred to Shin Bet custody for interrogation. Palestinian sources said the man was from the village of Nahalin, near Bethlehem.

The incident took place at the West Bank's Tunnel's Checkpoint between the Palestinian village of Husan and the settlement of Beitar Illit, not far from Jerusalem, along Route 60. MDA paramedics arrived at the scene and administered first aid to the victims. 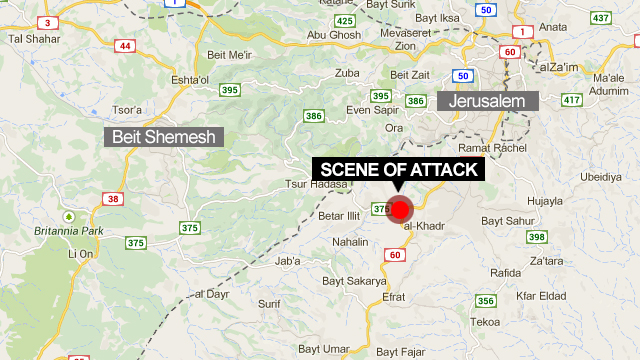 According to the IDF, the terrorist sprayed the material on a family with young children and was then shot in his leg. 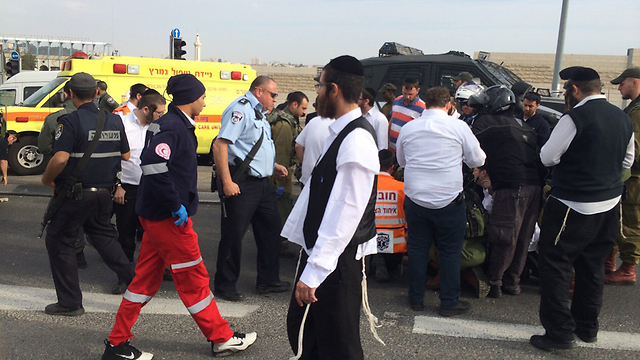 A Palestinian source told Ynet that the terrorist is Jamal Shaharna from the village of Nahalin located near Bethlehem.

An initial investigation says that Shaharna attempted to hitch a ride when the owner of the car realized that the attacker was attempting to throw the acid, at which point he exited the car and attempted to chase the terrorist, who was wielding a screwdriver and apparently intended to stab other Jews.

Shortly thereafter a civilian noticed what was happening and shot Shaharna in the lower body. Security forces caught him and transferred him to the custody of the Shin Bet. 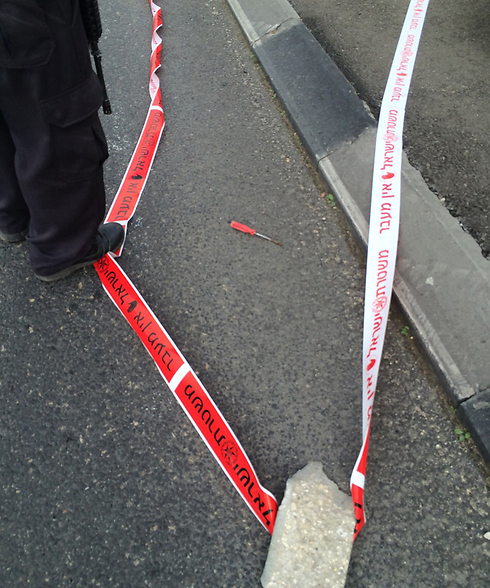 Of the wounded, four were young children aged 8-10 who suffered acid burn wounds to their limbs and suffered light wounds. Another victim was a 40-year-old man with acid wounds to the face and eyes, he was lightly wounded.

Acid attacks are rare in Israel and the Palestinian territories. Over the past month, 11 people have been killed in Palestinian attacks, mostly in Jerusalem, though there have been other attacks in Tel Aviv and the West Bank.

A Palestinian driver ran into a concrete barrier earlier in the day not far from Nablus in the West Bank. The barrier was part of an IDF outpost and a large group of soldiers were present at the scene.

Meanwhile, the police called reinforcements to the Temple Mount and Old City area in Jerusalem for fear of protests spiraling out of control after the end of the Friday Muslim prayers, in wake of the death of Palestinian Minister Ziad Abu Ein.

Tensions in Jerusalem have been running extremely high, after several terror attacks occurred over the last several weeks.

Most recently, a terrorist entered a supermarket in a settlement on the outskirts of Jerusalem on December 3 and stabbed two middle-age Israelis, wounding them moderately. An off-duty security guard, who witnessed the attack, fired at the terrorist and arrested him.

That attack occurred mere days after a vicious attack in a Jerusalem synagogue that killed five - four worshipers at the scene and a police officer who died later of his wounds.

Elior Levy and Yoav Zitun contributed to this report