Feiglin demands: One state for one nation in one country

Contender for Likud leadership makes his own Bar Ilan speech, declaring that 'the Oslo era is over' and that 'the Oslo Accords are futile, null and void.'

MK Moshe Feiglin, who leads the "Jewish leadership" division in the Likud party, presented his diplomatic policy at Bar Ilan University on Sunday, asserting that "the only just and smart diplomatic solution is 'one state for one nation in one country.'"

Feiglin, who will attempt to unseat party leader Benjamin Netanyahu in the Likud party's primaries on December 31, promised to serve as an alternative to the prime minister. 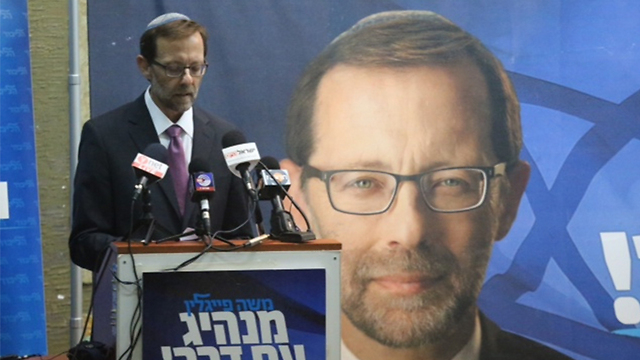 "I was always taught that if you lose your way navigating, you have to go back to the point where you got lost," he said at the beginning of his speech.

"In this place, in the famous Bar-Ilan speech, we became lost," he added, referring to Netanyahu's June 2009 speech in which he announced his commitment to the two-state solution.

"We lost our diplomatic path. This is where the national camp accepted the two-states for two people concept, in the heart of our land," said Feiglin.

Over the years, Feiglin has been seen as a symbol of the uncompromising right-wing in the Likud party.

As the leader of the intra-party faction in Likud, Feiglin has tried to lead a movement which is based on the concept of a Jewish state existing within the borders of the land of Israel, creating a Jewish consciousness and even aspiring to build the Third Temple on the Temple Mount. Just last week, Feiglin made headlines after police banned him from entering the Temple Mount, fearing that his presence at the holy site would lead to rioting.

In his speech, Feiglin asserted that "there's only one just solution - one state for one nation in one country."

He went on to say that "Until the Oslo Accords, everyone understood, the left and right-wing as one, that there is a fundamental difference in the conflict over borders between Arab states and the PLO."

"What we lost in Oslo is more serious than just homeland territory, we lost the most powerful weapon of all - justice. The Oslo Accords are futile, null and void," Feiglin said.

Later on, Feiglin offered the Palestinians three options they could choose from after "the elimination of the Abbas regime in the West Bank and the Hamas regime in Gaza."

The options at hand for Palestinians, according to Feiglin, are: "Permanent residency after acceptance of Israeli sovereignty, receiving citizenship after making a public pledge of allegiance and doing national service, and the third option: those who do not wish to accept Israel's sovereignty, would receive a generous immigration package so they could find their future elsewhere."

Finally, Feiglin made a commitment to work to strengthen the Jewish culture, enhance family life, strive to provide personal freedoms to each citizen and fight to lower the cost of living.