Israel is buying four ships from Germany with a total value of one billion euros, German newspaper Bild am Sontag reported Sunday, claiming possession of a leaked official memo, and Berlin will contribute a significant amount of funding. The project will be funded largely by Israel, but the German government plans to invest 115 million euros in the construction project.

The ships are being built at the ThyssenKrupp shipyard in the northern port city of Kiel, the newspaper said.

The report is based on a confidential letter sent by Germany's deputy finance minister, Steffen Kampeter, to the budget committee at the Bundestag. According to the leaked letter, the German Defense Ministry is required to allocate the amount for "defense systems for Israel," with the stated goal of "securing the economic region in the Mediterranean Sea."

It was previously reported that Navy ships are securing Israel's offshore gas facilities, for fear that this strategic installation will be the target of an attack. 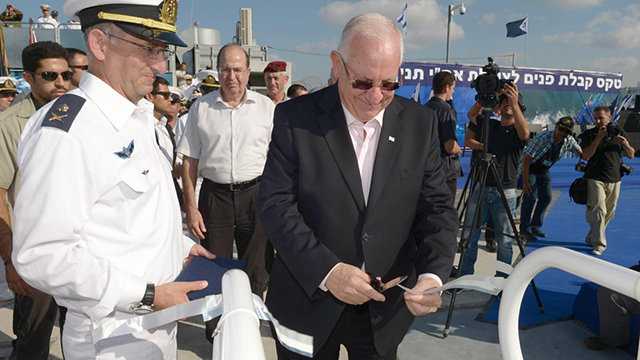 President Rivlin onboard the Tanin, a German-made sub sold to Israel.

Meanwhile, INS Tanin, the most sophisticated submarine of its class in the world and the first of three new subs purchased from Germany, docked in Israeli waters on September 23. Its uniqueness lies in its ability to remain underwater for far longer than usual, an estimated 18 days.

Costing about $450 million, it has an approximate length of 68 meters, and can hold some 50 staff members. And, according to foreign sources, it can launch missiles with nuclear warheads.

There has been growing internal criticism inside Germany over the security assistance provided by the Merkel government to Israel. The criticism has grown since last summer, due to Operation Protective Edge.

The German media reported that following the heavy bombing of the Gaza Strip by the IDF, Berlin decided not to approve new arms exports to Israel. However, according to prestigious German weekly Der Spiegel, the lack of exports was due to a dearth of new requests from Israel, not any material policy change by Merkel.