Former Shas leader Eli Yishai announced Monday evening that he is leaving his political home of the past 30 years and forming a new party.

"The people are with us because they want unity," Yishai said during a press conference in Jerusalem, predicting 10 mandates for his new party in the upcoming elections. "The people want to finally break the barriers between religious and secular, between Ashkenazim and Sephardim, to bring the tribes of Israel together. The people are with us because the people want social justice and concern for the poor, the lower class, the periphery and development towns." 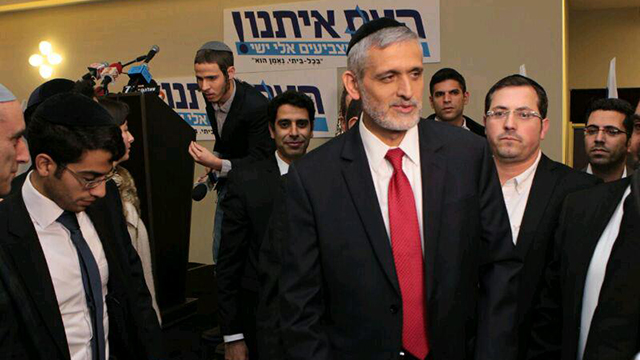 Despite leaving the ultra-Orthodox party started by Rabbi Ovadia Yosef, Yishai said he was continuing Yosef's path. "It's not easy. My yearning for our teacher (Rabbi Ovadia Yosef) is intense and difficult. I'm leaving a party but I'm not leaving a way. I have no doubt I am starting a new party with my hands clean, with integrity and with faith," he said.

He said the decision to leave Shas was a difficult one to make. "I've deliberated for a long time but in the end, Israel's great and the people were the deciding factor to go on a new path."

On Sunday, Shas announced that it was forming a council of women headed by Rabbi Yosef's daughter Adina Bar-Shalom and Shas leader Aryeh Deri's wife, Yaffa Deri, that would advise to the movement's leaders on women's issues.

This was Shas' answer to demands by ultra-Orthodox women to be allowed to run for Knesset in the haredi parties' lists.

When asked whether his new party will include women, Yishai refused to commit, merely saying "we will do only what Israel's great will tell us."

The Shas party said in a statement: "The Shas movement regrets Eli Yishai's choice to leave and abandon the way and legacy of Rabbi Ovadia Yosef. We regret the fact personal drives and foreign motives led Mr. Yishai to this act." 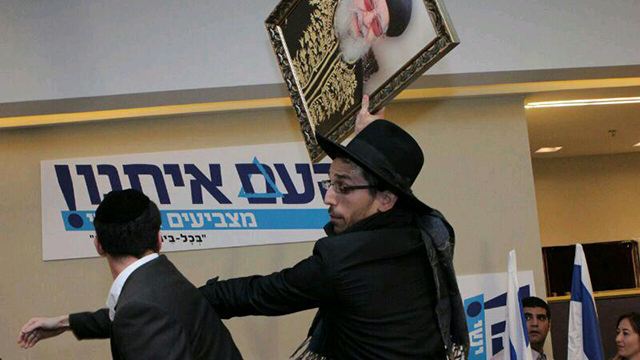 Rabbi Shimon Baadani, from Shas' Council of Torah Sages, who until recently was considered close to Yishai and his representative in the movement's spiritual leadership, published a letter Monday renouncing Yishai's new party.

"I did not agree to the establishment of a new movement by Eli Yishai, because that might harm the Shas movement and cause severe disagreements and fights in our public," Rabbi Baadani wrote.

"We don't have any but the holy Shas movement to the Sephardic public which was formed by Rabbi Ovadia Yosef, may he rest in peace, and his will is to continue strengthening only this holy movement and strengthen the holy institutions and establishments tied to the movement that Rabbi Ovadia Yosef formed and dedicated his life to," Rabbi Baadai went on to say. 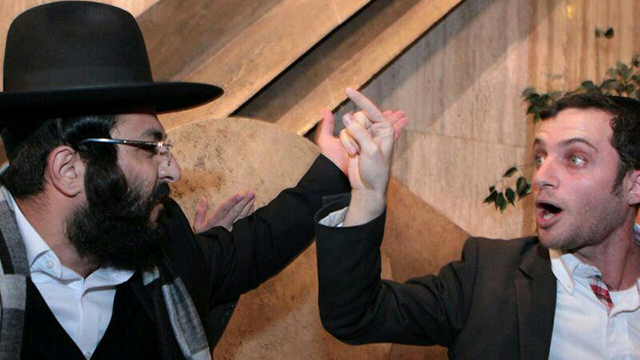 Shas supporters gathered outside the press conference to protest Yishai's decision. They tried to gain access to the conference hall and disrupt the press conference, yelling "traitor" at him. Yishai left from another exit to avoid confrontations with the protesters. Yishai supporters, on the other hand, were calling out "Eli, King of Israel." 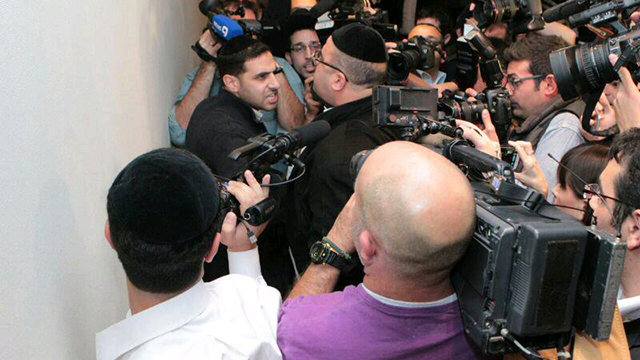 An altercation then broke out in the conference hall after Yishai left, between his supporters and those protesting against him. The Shas supporters took the photo of Rabbi Ovadia Yosef that was displayed behind Yishai during the press conference and called on Yishai not to say Yosef's name in vain, and with that desecrate his memory. They also vandalized sign of Yishai's new party that were also on the stage.

Shas leader Aryeh Deri condemned the violence at Yishai's press conference. "This behavior has nothing to do with the Shas movement and is not a representation of its way. We must all keep our teacher's legacy and choose only pleasant behavior."

Yishai joined Shas 30 years ago and served in a number of different roles under Deri's leadership, including as Deri's aide in the Interior Ministry. Later, he was appointed to more senior roles. In 1996, he was first elected to the Knesset and was appointed minister in his first term in office.

Ahead of the 1999 elections, Yishai was made the head of the party to replace Deri, who was facing criminal charges, and was given to understand he was only a "place holder" until Deri could return to political life. Meanwhile, Yishai established himself and when Deri returned, Yishai refused to relinquish the party's leadership. The decision was left to the hands of Rabbi Ovadia Yosef.

Fearing the possibility of Deri forming a new party that would take away votes from Shas, Yosef decided that in the 2013 elections, the party will be jointly led by Deri, Yishai and Ariel Attias. The partnership did not work and a year and a half ago, Rabbi Yosef decided to give Deri the reins.

Shas' spiritual leader has since passed away, and Rabbi Shalom Cohen, who is close to Deri, took Yosef's place. Rabbi David Yosef, Deri's friend, joined the movement's Council of Torah Sages, turning the tensions between Deri and Yishai into a complete disconnect.

In recent months, Yishai's allies started looking into the possibility of leaving the party - a move made more urgent when elections were announced. Yishai set conditions for him to stay in Shas, so the haredi public's votes won't be split between two parties. He stressed that getting the second spot on Shas' list and the promise of receiving a senior minister's role was not enough, he demanded a say in compiling the Knesset list, wanted to extend the Council of Torah Sages and sought out some of the leader's authorities.

The conflict surrounding Yishai is no longer with party chairman Aryeh Deri but rather with the party's spiritual leadership – Council of Torah Sages, according to allies of Deri within the Shas party.

On Saturday, reports emerged of sharp criticism made by Deri against Yishai behind closed doors. On Sunday, Deri's Shas allies said that, as they understand it, the separation from Yishai is unavoidable, but so far nobody has taken unilateral steps to disconnect Yishai from the Shas party.

Attila Somfalvi contributed to this story.