Israel, US boycott conference in Geneva for Palestinian human rights

Canada and Australia also boycott conference that invites 196 signatories of the Geneva Conventions, during the conference Israel's settlement construction in the West Bank and East Jerusalem rebuked.

The US and Israel boycotted a conference held in Geneva that called on the 196 signatories of the Geneva Conventions which discussed the human rights of Palestinians living in "occupied territories."

The international community delivered a stinging rebuke to Israel's settlement construction in the West Bank and East Jerusalem, saying Wednesday the practice violates its responsibilities as an occupying power. 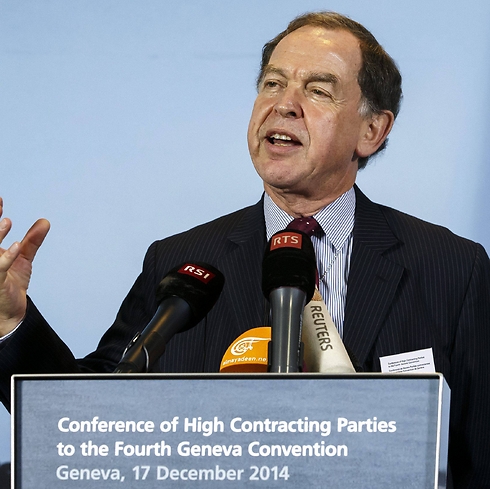 The declaration adopted by a consensus of 126 of the 196 parties to the Fourth Geneva Convention insists that international humanitarian law must be followed in areas affected by the conflict between Israel and the Palestinians.

The Geneva Conventions govern the rules of war and military occupation. Nations that took part in a one-day conference in Geneva "emphasize that all serious violations of international humanitarian law must be investigated and that all those responsible should be brought to justice," according to the 10-point declaration.

Swiss Ambassador Paul Fivat, who chaired the conference, told reporters afterward the declaration is legally binding on all nations that adopted it.

"This is a signal and we can hope that words count," Fivat said. The declaration emphasizes one aspect of the Geneva Conventions: a prohibition on colonizing occupied land.

Israel accused Fivat of adding to the politicisation of the Geneva Conventions on the laws of war.

Israel contends the prohibition shouldn't apply to the West Bank and Gaza because their sovereignty is in limbo, with Jordan and Egypt no longer claiming them and the Palestinians never having their own state.

Another concern raised in the declaration is that Israel should "fully and effectively" respect the Fourth Geneva Convention, meant to protect civilians during times of war including in East Jerusalem and other occupied territories.

Switzerland, as the depositary of the Geneva Conventions, said "the state of Palestine" acceded to the conventions effective April 2 — 25 years after Palestinians first sought membership.

Israel opposed the move, arguing there is no universally recognized Palestinian state and it would complicate peace talks.

The UN General Assembly upgraded Palestine to a "non-member observer state" of the world body in 2012.