US President Barack Obama celebrated Hanukkah on Wednesday with special guests and coexistence-themed menorahs. 550 guests arrived at the White House for the event, including 20 Israeli teenagers who brought a Hanukkah lamp made at the bi-lingual school in Jerusalem that was set ablaze by arsonists.
Obama celebrating Hanukkah at the White House    (צילום: רויטרס)
X

The unique lamp was lit by two ninth-graders from the school, Inbar Vardi and Mouran Ibrahim. Obama arrived with a cheerful smile with his wife, Michelle, and also celebrated the release of Alan Gross, the Jewish-American who was in a Cuban prison for five years.

"I’m told that in the Jewish tradition, one of the great mitzvahs is pidyon shvuyim," Obama said to applause. "And that’s what we’re celebrating today, because after being unjustly held in Cuba for more than five years, American Alan Gross is free. 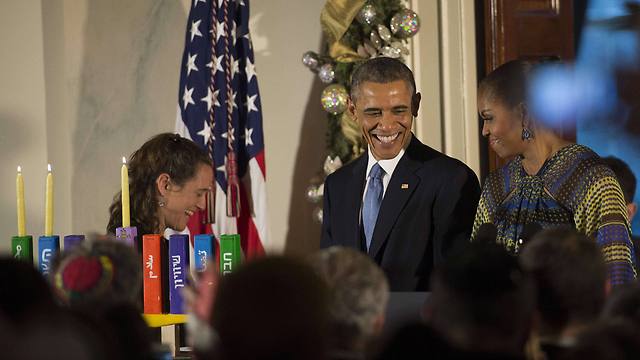 "Obviously, the bonds between our two countries are unbreakable, and with the help of young people, they’re only going to grow stronger in the years to come," said Obama.

"So what brings us together is not just lox and latkes - although I have heard the latkes here are outstanding. Am I wrong? Not as good as your mom’s, but they're good," Obama joked. Following the candle lighting, Roi Shalom of Oranit shook Obama's hand and told him he was about to start his army service. "Thanks for having our back," he told Obama, who responded, "Always." 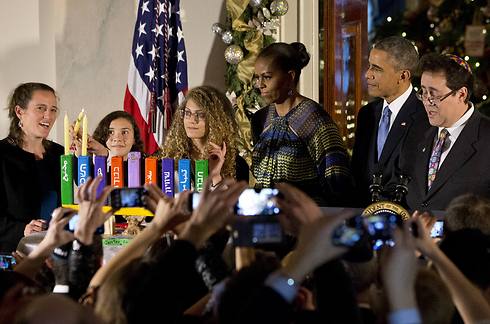 This was the first of two Hanukkah parties held by the White House this year because of high demand (Photo: AP)

This was the second consecutive year in which the White House held two Hanukkah parties because of the overwhelming demand to participate.

"This is our first party - it is the best party," Obama joked. "Don’t tell the others."

Among the attendees were members of Congress, representatives of the Israeli Embassy in Washington, and dozens of 12th-graders from around Israel who arrived as part of a leadership program.

In addition to the menorah from the bi-lingual school, three others were brought to the White House, one of which was made out of remnants of a rocket in a Gaza border community.