Palestinian workers who use the crossing daily say construction to create pedestrian crossing is not progressing and making conditions worse.

In a rare move, 6,000 Palestinian workers, who commute from the West Bank to Israel for work every day, decided to hold a strike on Sunday to protest the "daily humiliation" that they endure at the Ephraim Gate Crossing located west of the Palestinian city of Tulkarem in the West Bank.

Construction of a new pedestrian terminal on the Palestinian side of the crossing has worsened the conditions for Palestinians, who must use temporarily use a narrow passage in which thousands push and shove each other

The construction of the new pedestrian passage which has harmed the flow of traffic at the crossing was initiated by the Palestinian Civil Administration. The Palestinians who were behind the strike said that the construction was progressing too slowly and that their patience had run out. 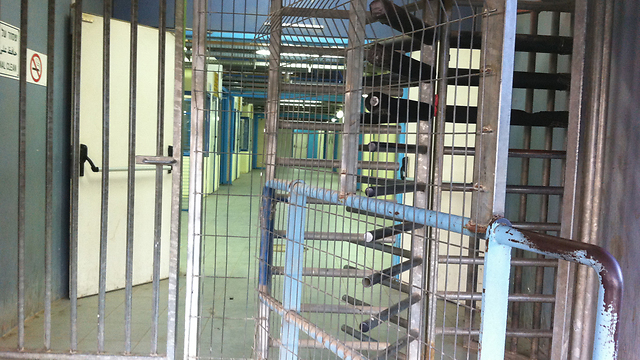 The Ephraim Gate Crossing. (Photo: Rachel Afek)
"When I arrive at the crossing – as far as I'm concerned, I'm entering hell itself," said Sabri, a Palestinian worker from Tulkarem who has worked in Israel for several years. "People cram into the narrow crossing like animals, they begin to push and pressure builds up and in many cases people get injured and end up being taken away to the hospital in Tulkarem by ambulance," Sabi continued. According to Sabi, the lack of manpower often slows down the process and creates congestion even after the Palestinian workers finish crossing the narrow pedestrian crossing. "There are 16 stands for biometric testing. In many cases, there are only four or five stands in operation and all the rest are closed," said Sabi, who admitted that inefficiency at the crossing can also be attested to the Palestinian side of the crossing not being well-organized. Sabi said that the Palestinian Authority does not send in individuals to monitor the entry to the crossing in order to prevent congestion and disorganization. However, the Palestinian workers also said that some days they experience unreceptive and degrading treatment by the workers at the crossing. "There are times when they treat us without a drop of respect," said Azam, one of the Palestinian workers who uses the crossing. "Sometimes there are female workers at the biometric stand who stand and talk to each other, laugh and ignore us completely – and we have to wait for them to finish talking. If someone says they are late or asks for them to check him they say, 'Shut your mouth.' I know that whenever I am at the crossing – we have no self-respect." The worsening conditions at the checkpoint during the ongoing construction led a group of Palestinian workers to conduct a spontaneous strike on Sunday. "The news traveled by word of mouth and reached everyone. I did not see one person oppose it. We turned around and went home," said one Palestinian individual who joined the strike. "Everyone said that although the strike was unplanned, many had discussed such a move for a while," said the Palestinian worker. Right after the decision was made, the workers representatives met with officials of the Palestinian Civilian Administration in Tulkarem in order to lay out their case. During the meeting, the officials convinced the workers to end the strike and promised to work wither their counterparts to improve the conditions.

"We'll return to work," said the workers, "but if we see that the pace of the construction is not accelerated – we will strike once a week and will not arrive to work in Israel."

The manager of the civil administration within the Israeli Defense Ministry said in a response to the matter: "The establishment of the terminal was designed to improve the service given to Palestinian workers who pass through it daily to work in Israel. We are aware of the temporary discomfort caused by the construction underway and are scheduled to end in the next two months." As for the complaints about the dismissive attitude of the workers at the crossing the authority said it has invested time and resources in manpower and technology that ensure a high level of security as well as a high level of service. They also said that the claims made by the Palestinian workers will be examined in depth and treated accordingly.