Anger in Israel after 'Homeland' compares Begin to terrorist

The final episode of the fourth season of "Homeland" received a heated response in Israel after the character of a terrorist in the show was compared to former Israeli prime minister Menachem Begin. The scene that sparked the anger depicted a conversation between CIA agent Dar Adal and former CIA director Saul Berenson, a Jewish character played by Mandy Patinkin, discussing the possibility of protecting Haissam Haqqani, an Afghan Taliban leader, in order to ensure that he will not give political asylum to terrorists.
A World Away
'Homeland' irks Lebanese, Israelis
Associated Press
TV show about Arab terrorists, American turncoats inadvertently becomes tale of two cities: Beirutis are angry over misleading depiction of their city as swarming with terrorists; Israelis are peeved that Haifa, Tel Aviv appear to be Middle Eastern after all.
'Homeland' irks Lebanese, Israelis

Berenson responds and says that Haqqani is a terrorist who "recently killed 36 Americans" to which Adal responds, "Menachem Begin killed 91 British soldiers at the King David hotel before he became prime minister."

The fictional CIA agent referred to an explosion at the King David Hotel in Jerusalem in 1946 that was carried out by the Irgun (known as Etzel in Israel) which was headed by Menachem Begin. 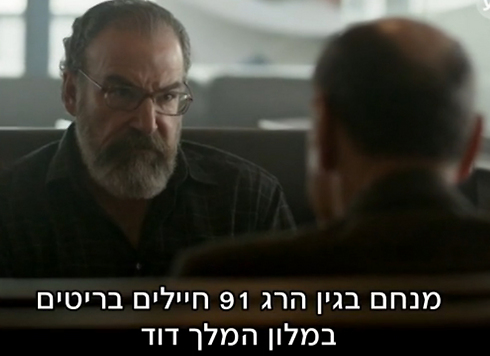 Homeland: 'Menachem Begin killed 91 British soldiers in the King David Hotel'
The head of the Menachem Begin Heritage Center in Jerusalem, Herzl Makov, sharply criticized the comparison made in the fictional drama series and said, "We will ask for explanations for this comparison," adding that the statement consisted of "slander against Menachem Begin and Israel."

"To say that Menachem Begin killed? He wasn't there. The underground organization was under his command and he took responsibility. Additionally, during the incident, three warnings were given to the British to evacuate the place. The British commander refused. Therefore, there is a dramatic difference between the two incidents that were compared. As far as I'm concerned, it is just like saying that they are both terrorists because they wore brown shirts. This is especially irritating because of the fact that Homeland is based on the Israeli show Prisoners of War," said Makov.

In the show, Haqqani himself leads an attack at the American Embassy in Islamabad, Pakistan, and is personally responsible for the killings of some of the embassy workers. A particularly jarring scene shows him slitting the throat of a recurring character.

Ynet did not receive a response from Gideon Raff, the creator of the award winning Israeli TV drama series "Prisoners of War" from which "Homeland" was adapted. Raff was also involved in the creation and production of "Homeland" and recieved two Emmy awards for his work on the American drama series. The Irgun was a Jewish armed force established by Ze'ev Jabotinsky, which held the ideology that only active retaliation would deter the Arabs and ensure a Jewish state. The attack on the Kind David Hotel in 1946 targeted the British military and administrative headquarters which was housed in the southern wing of the hotel. The attack led to the death of 91 individuals of various nationalities and 46 people were wounded. The Kind David Hotel bombing was the deadliest attack carried out during the time of the British Mandate. The Irgun had said it gave three warnings and called the hotel, but nobody from within the hotel was evacuated prior to the detonation of the bomb.