'He flew with a Koran by his side,' says the brother of the Jordanian pilot who was captured by the Islamic State; Jordan tries to boost morale of the public, says it will do everything to bring pilot back.

The radical Islamic State terror group notched a major victory on Wednesday when it shot down a Jordanian warplane belong to the US-led coalition against the Islamist group and captured its pilot, First Lieutenant Muath al-Kasaesbeh.

The family of the pilot has prayed for his safe return from captivity, and some in the Hashemite kingdom believe that, despite the Islamist group's cruelty, there is a negotiation partner. 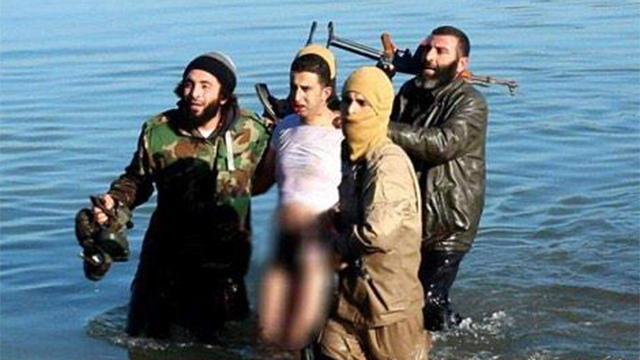 The Jordanian pilot being taken in by members of the Islamic State terrorist group.

"I implore Daesh (as Islamic State is known in Arabic) to show him mercy," asked the pilot's brother, Jaweed, in an interview with a local radio station. "My brother is a devout Muslim who prays every morning; he will meet Allah. He only flew with a Koran by his side and he only followed the orders he receives from the army – those he cannot refuse." 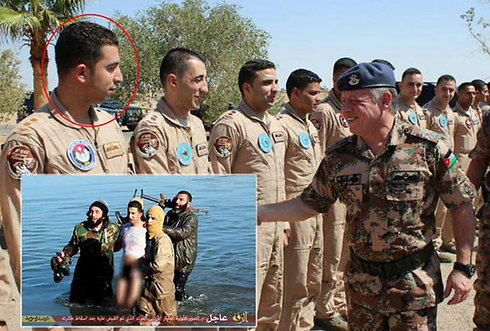 Muath al-Kasaesbeh at a military ceremony in Jordan.

The captive pilot's brother asked to show the terror group just how much of a devout Muslim his sibling in the hope they would spare his life, or he would not have said the following line: "Muath was a respectable Jordanian citizen who obeyed his two parents and throughout his life did not break fast during Ramadan."

Jaweed also called on the Jordanian public to pray for his brother and said that his family heard of the brother's capture through media reports. 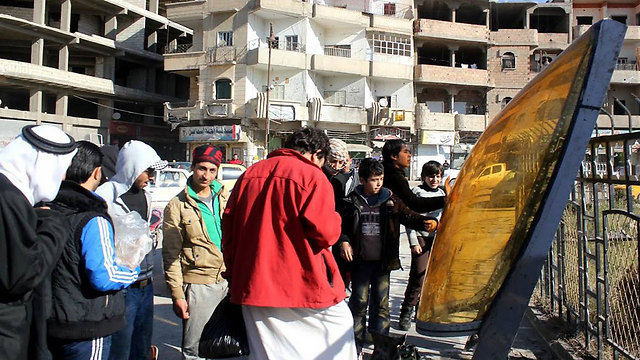 Parts of the cockpit of the Jordanian plane displayed on the streets of Syrian city taken over by Islamic State.

Muath married last summer and only finished flight school in recent months. His father, Youssef, also urged the public to support the family. "I pray that Allah will plant mercy in their hearts and they will release him."

He implored Jordan's King Abdullah "to return my son to me. We all sacrifice for our country and for the honor of the king." The father said he was notified that the king was following the affair and dedicating special efforts to saving his son's life.

Youssef last saw Muath on Sunday, after which his son returned to military duty. "We knew he was participating in the operations against Daesh." 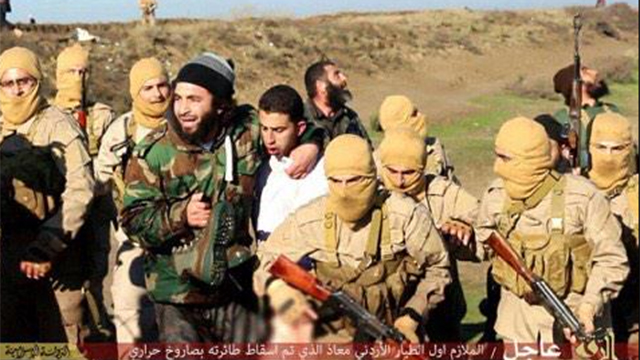 In an interesting sign of Jordanian unity, even the Muslim Brotherhood – which opposed the kingdom's cooperation with the US-led coalition – said that it hoped the captive pilot would be released soon.

First Lieutenant al-Kasaesbah was born in 1988 and lived in the city of Al Karak south of Amman. In 2006, he began his studies at the Royal Jordanian Air Force Academy. Al-Kasaesbah completed his studies in 2009 and joined the Jordanian Air Force. Before his summer wedding, he made pilgrimage to Mecca and then joined the coalition against the Islamic State. "He believed he needed to join the attacks against Daesh in order to protect innocent people from the tragedies they cause them," said one of the captured pilot's brothers.

Reports of the incident were spread around the world and among social networks on Wednesday. "We are all Muath al-Kasaesbah" became a popular hash tag on Twitter on Wednesday evening – initiated by many Jordanians who fear for the pilot's fate.

The Jordanian Government Spokesman, Muhammad Al-Momeni, attempted to lift the morale of the public and said to media outlets that the pilot displayed bravery and sacrifice saying, "All of us support and stand with his family, his tribe, and his friends in the army."

Al-Momeni made it clear that Jordan would not spare any means to bring back the pilot and said that Jordan's fight against terror will continue.

"We are doing this to protect the religion of Islam," he said. Jordanian TV outlets also tried to improve morale by airing patriotic songs hailing the army in order to ease the public's mood. A picture of the pilot was featured that had the caption "We are all Muath."

Meanwhile, the Islamic State group celebrated the overthrow of the coalition aircraft and the capture of the pilot, and in the streets of the Syrian city of Ar-Raqqah members of the terrorist organization carried around a remaining part of the cockpit.

On the other hand, the US military said evidence showed that Islamic State did not shoot down the Jordanian warplane that crashed in Syria.

"Evidence clearly indicates that ISIL did not down the aircraft as the terrorist organization is claiming," the US military's Central Command said in a statement, using an acronym for the group.