Washington says UN bid 'sets arbitrary deadlines for reaching a peace agreement and for Israel's withdrawal from the West Bank, and those are more likely to curtail useful negotiations.'

The Palestinians submitted the final draft of a statehood resolution to the United Nations on Monday night close to midnight, calling for a peace deal with Israel within a year and an "end to occupation" of Palestinian territories by the end of 2017

The United States said on Monday it did not support a draft statehood resolution that the Palestinians plan to introduce at the United Nations, saying it would not advance the goal of peace or address Israel's security needs.

"We don't think this resolution is constructive," State Department spokesman Jeff Rathke told a regular news briefing. "We think it sets arbitrary deadlines for reaching a peace agreement and for Israel's withdrawal from the West Bank, and those are more likely to curtail useful negotiations than to bring them to a successful conclusion.

"Further, we think that the resolution fails to account for Israel's legitimate security needs, and the satisfaction of those needs, of course, integral to a sustainable settlement."

Earlier Monday, Prime Minister Benjamin Netanyahu vowed that if the international community does not oppose the Palestinians' UN bid, Israel will.

In a meeting with Indiana Gov. Mike Pence, Netanyahu stressed that "Israel will oppose conditions that endanger our future."

"We expect the entire international community - at least the responsible members of that community - to oppose vigorously this UN diktat, this UN Security Council resolution. Because what we need always is direct negotiations and not imposed conditions," he told Pence in a meeting in Jerusalem.

Palestinian President Mahmoud Abbas informed US Secretary of State John Kerry by phone that he would press ahead with the initiative despite Israeli and US opposition, the official Palestinian WAFA news agency reported. Several European countries had been pushing for a less stringent timeline that might win broader support. 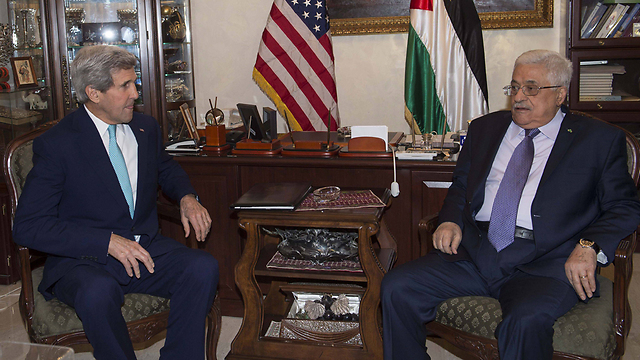 John Kerry and Mahmoud Abbas (Photo: AFP)
"Today the Arab group will meet in New York, and we will submit the original draft resolution to the Security Council hoping to conclude the vote by tomorrow or the day after," senior Palestinian official Saeb Erekat told Reuters. Palestinian officials said the proposal calls for negotiations to be based on the territorial lines that existed before Israel captured the West Bank, East Jerusalem and Gaza Strip in the 1967 Six Day War. "The draft resolution calls for the resumption of negotiations to solve all final status issues by no later than 12 months after the adoption of the resolution and ensures the end of the Israeli occupation that began in 1967 will come no later than the end of 2017," the Palestine Liberation Organization said. "It calls for two sovereign, democratic and secure states, Palestine and Israel." Israel, which pulled troops and settlers out of the Gaza Strip in 2005, has said its eastern border would be indefensible if it withdrew completely from the West Bank. A Palestinian draft, submitted to the Security Council by Jordan on Dec. 17, had called for Jerusalem to be the shared capital of Israel and a Palestinian state. The final proposal reverts to a harder line, saying only that East Jerusalem will be the capital of Palestine, the officials said. It also calls for an end to Israeli settlement building in the West Bank and East Jerusalem. Israel has said a Security Council vote, which follows the collapse in April of US-brokered talks on Palestinian statehood, would only deepen the decades-old conflict. It supports negotiations but rejects third-party timelines. "We will continue to rebuff vigorously attempts to force terms that would jeopardize our security," Netanyahu, referring to the Palestinian UN bid, said in public remarks to his cabinet on Sunday. Nine Security Council votes are needed to adopt a resolution, which would then force the United States, Israel's closest ally, to decide whether to veto it.