The US State Department described Israeli actions as "unacceptable" 87 times in 2014, with only three countries being more "unacceptable," according to a Foreign Policy article published last week.

Journalist Micah Zenko searched the State Department's website for usage of the term, and his "top ten" list shows Israel sandwiched right between North Korea and Pakistan. Zenko pointed that the US officials regularly use the phrase "but then do very little in response to prevent or deter those actions from reoccurring." 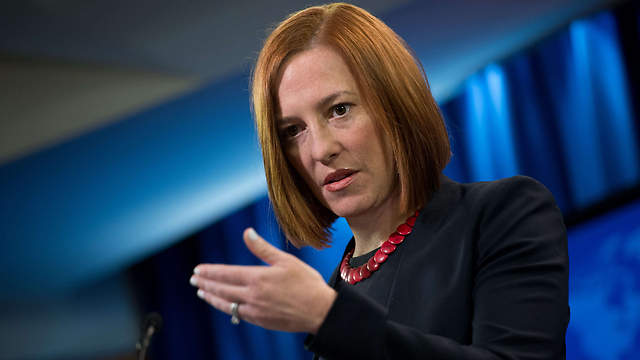 Jen Psaki, spokesperson for the US State Department. (Archive Photo: AFP)
Most of the condemnations relating to Israel involved building in settlements or the announcement of plans to construct additional housing behind the Green Line. Government spokespeople also castigated Israel for civilian casualties during Operation Protective Edge. US Secretary of State John Kerry recently used the "unacceptable" label to refer to North Korea's alleged hacking of the Sony Corporation.

The US State Department is not the only entity in the international diplomacy arena that tends to recycle certain phrases. Ynet found that UN Secretary General Ban Ki-moon used the word "concerned" 140 times in 2014 in statements responding to events. Israel and Palestine were the most concerning places of 2014, with 19 press releases using the term.