Netanyahu in IS magazine

Netanyahu dubbed 'tyrant' in IS magazine

Islamic State's Dabiq magazine quotes Prime Minister Netanyahu's interview with CBS in 'In the Words of the Enemy' section.

The Islamic State quoted excerpts from an interview Prime Minister Benjamin Netanyahu gave to CBS in a section featured in the terror group's online magazine Dabiq, titled "In The Words of The Enemy", in which he stressed the importance of military action against the terror group.

Netanyahu's quotes and his photo appear in a two-page spread in the magazine's latest issue, where he is dubbed "the tâghût of the Jews" – tâghût is an Arabic term which is interpreted to refer to a tyrant, heretic or a false leader.

In the feature, the prime minister, who is referred to as "the head of the Jewish State," is quoted saying that the organization posed a threat to Israel. The section also features statements on Israeli involvement in the fight against the Islamic State. 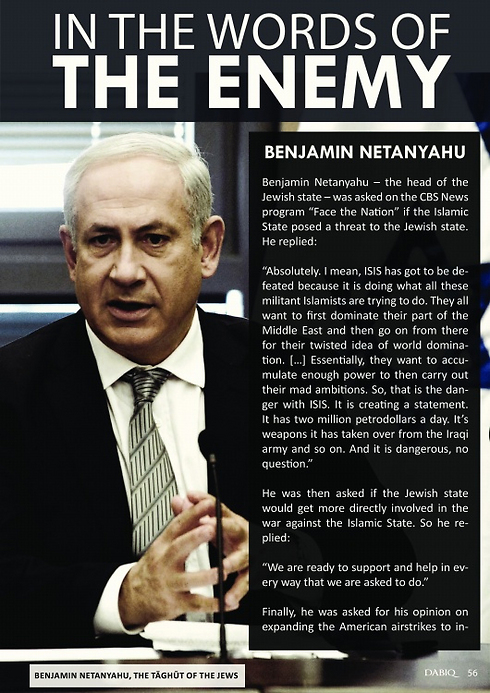 In the interview on CBS' “Face the Nation" in November, the prime minister reiterated Israel's support for US efforts to combat the terror group, but also warned against Iran: "We want them both to lose. The last thing we want is to have any one of them get weapons of mass destruction.".