President Reuven Rivlin met with the head of various churches in Israel and senior members of the community to mark New Year, fight extremism.

President Reuven Rivlin hosted the traditional state reception for leaders of Israel's Christian leaders to mark the New Year on Tuesday morning, December 30. The event was attended by nine heads of various churches in Israel and senior members of the community.

Both the Israeli president and the Greek Patriarch of Jerusalem, His Beatitude Theophilos III, both spoke at the annual event. 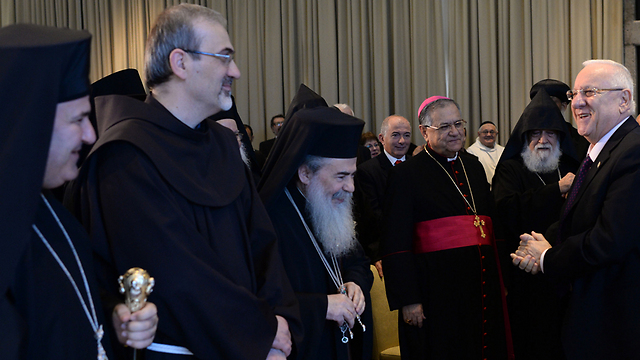 President Rivlin welcomed those attending, saying "Over the past months, we have been greatly concerned, by the on-going religious persecution and restrictions on freedom of worship for minorities in the Middle East.”

“Because of their faith hundreds of thousands are being exiled, forcibly converted, attacked, and brutally murdered. This is a war against extremism. A war, being waged against those who want to spread a message of freedom of worship and coexistence, by those who carry the flag of destruction and hatred,” continued Rivlin.

"This is a cause of great worry and pain for all us. We share the Psalms of King David, the words of the Prophets, and a love for Jerusalem, and the Holy Land. As we know, we are all created in the image of God.” 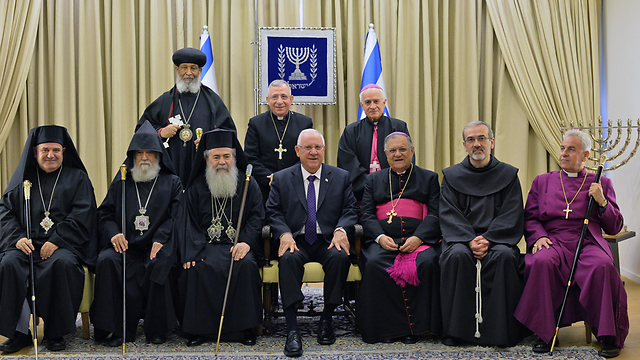 Citing the prophet Malachi, the Israeli president asked, "Do we not, all have one Father? Did not one God create us?" We will continue to live together, and build bridges of peace, here, in the land of our fathers.”

"May we all, Christians, Muslims, Jews, children of Abraham, together with all those of different faiths, see the fulfillment of the vision of the prophet Isaiah, that "Nation shall not lift up sword against nation, and no longer learn war." Let 2015 be a year of partnership and friendship. Let it be a year of understanding and mutual respect,” concluded Rivlin. "I wish you all a peaceful and happy New Year."

The Greek Orthodox Patriarch of Jerusalem, His Beatitude Theophilos III, commented about the central role that the Holy Land plays in inspiring the global community.

"In this season in particular, the world, caught up in the darkness of violence, poverty, persecution and war, looks to us, the communities of the Holy Land for renewed hope and inspiration,” said the Greek Patriarch.

“Our precise paths as political and religious leaders may be different, but first and foremost, our concern is always our people. In this region, we recognize the diversity of the peoples and understand that the harmonious coexistence of the Abrahamic faiths is essential to the integrity of the Holy Land."