Prof. Manuel Trajtenberg, a well respected economist, will join the center-left bloc in the upcoming elections. The announcement was made official Wednesday in a press conference held with Labor Chairman Isaac Herzog and Hatnua Chairwoman Tzipi Livni, who form the center-left 'Zionist camp' bloc.

Herzog said that should they win, Trajtenberg, who headed a government-appointment committee tasked with proposing solutions to Israel's socioeconomic problems, would serve as Israel's next finance minister. 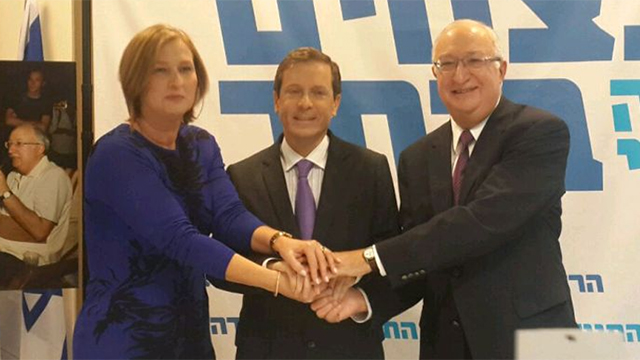 Livni (L), Herzog (C) and Prof. Trajtenberg
Trajtenberg will sit on the party's number 16th spot, while the bloc is currently polling at around 20, indicating he will likely serve as an MK during the next Knesset. "Me and Livni have decided that Trajtenberg will lead the economic issue and will be our candidate for finance minister," Herzog said at the press conference. "We are all hungry for a new economic way, one which is more just and equal and gives the working man a reach chance while helping those less fortunate," Trajtenberg said, admitting that the committee he headed failed in making sure its recommendations are implemented by the governed. "I have a dept to pay and I have the power to bring about a change," he said, recalling the 2011 social protest movment: "The protesting youths asked me 'why should we belive you?' I told them that if the government didn't do what was necessary I would personally take up the mission." Livni also referenced the social protest movement, symbolized by the tent encampment set up along Tel Aviv's Rothschild Boulevard, saying "when I heard the cries from Rothschild, and I saw one person grow to a hundreds, it forced me to change my priorities, and that's the way it should be. That is the reason we are here, to tell the citizens they are now in the center. We want you to know your cries were not in vain."

From Harvard to Rothschild

Trachtenberg, 64, chairs the Higher Education Council's Planning and Budgeting Committee. From 2006 to 2009 he served as head of the National Economic Council at the Prime Minister's Office – the body advising the prime minister on economic policies.

In April 2009, he resigned following Netanyahu's decision to appoint his personal advisor, Uri Yogev, for the new role of chairman of the National Economic Council's advisory committee. Shortly afterward, Trachtenberg was appointed chairman of the Planning and Budgeting Committee by then education minister Gideon Sa'ar.

Trachtenberg, who has a PhD in economics from Harvard University, specializes in technological innovations and is considered a strong supporter of the free market and reducing bureaucratic barriers.

Nonetheless, he has spoken many times about the need to limit the market forces in order to prevent the creation of cartels undermining free competition.

In 2011, he was appointed head of a government-appointed team, comprised of various financial experts, tasked with resolving the growing social unrest.