Seventy years after the liquidation of the Lodz ghetto during World War II, a diary containing meticulous documentation of day-to-day life within its walls, as depicted by Nazi officers, was recently uncovered, it was reported Thursday.

Using laundered language, the Germans describe their treatment of the local Jews, including how they punished them over thoughts of escape, and their use of brutal methods to extract information from the "smart alecks" among them. 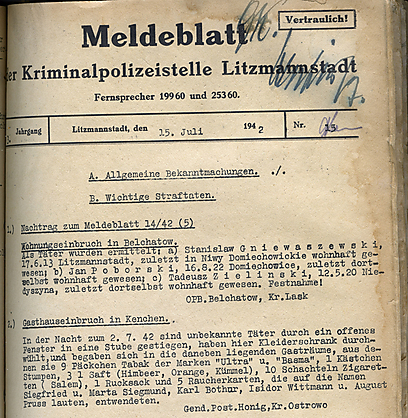 During World War II, Lodz was home to the second largest Jewish ghetto. Over 200,000 Jews are said to have passed through the ghetto, many later going to the notorious Auschwitz death camp. Only 10,000 are said to have survived.

The Shem Olam Institute for Education, Documentation and Research on Faith and the Holocaust recently managed to get hold of the rare find which the Nazis attempted to hide, and has now revealed it, on the occasion of Yom Hakaddish Haklali, the memorial day for victims of the Holocaust whose dates of death are unknown.

The difficult text shows another aspect of the violent and brutal regime directed against the locals, which showed no patience to those who failed to obey cruel orders.

The diary, the majority of which has not yet been translated into Hebrew, features descriptions of the use of torture in interrogations of Jews who are termed as "smart alecks", arrests of Jews suspected of possessing "prohibited items", and an account of contacts with the Judenrat, a Jewish governing council, from which the officers extracted incriminating inside information against Jews who did not adhere to the strict rules.

"The Jew Goldberg Meyer was caught after we received information that he was pretending to be a Pole, and trading textile products that he had acquired in the past," the German officers wrote in one of the diary's pages. 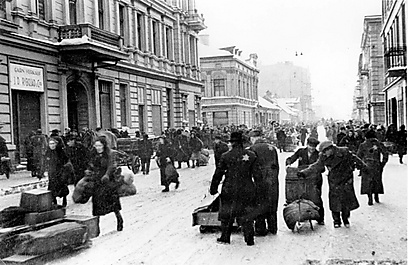 The description is followed by many general reports about detainees and hunts for Jews: "Shtayer, David, born October 21, year of birth unknown, from Turek, about 160 centimeters tall, thin, black hair, brown eyes, also called by the name of Anthony Brodziak."

Another section read: "The mischling ("crossbreed" in German) Oscar Steiner, born February 26 1901, from Melsdorf, lives in Oberau within Garmisch district, fled, after which a hunt for him was conducted by the Munich police under an arrest warrant, according to regulations."

'Another characteristic of extent of German evil'

Another entry described the brutal harassment of a family that tried to hide a Jewish boy in their home: "The boy Haimovich Hanek had been staying at Foulkes Deutsche (a Polish of German descent). Following a quarrel between neighbors, we received information that the Yaeger family had taken in a Jewish boy – his family gave them a great amount of money to take care of him. The Yaeger couple was caught after a manhunt, and the boy claimed he was their son. His name was revealed later on. In the morning, a unit will head out to confiscate the property in their home."

Rabbi Dr. Avraham Krieger, director of the Shem Olam institute, said: "The diary, which was revealed for the first time, displays another characteristic of the extent of German evil. The Ghetto officers used any possible means to create a regime of terror and fear among the Jews of the ghetto, and used the cruelest, most despicable tools to serve the Nazi destruction machine. This diary reveals precisely what they Germans wanted with all their might to hide – but they didn't manage to do so.