Palestinian President Mahmoud Abbas said on Sunday he was discussing with Jordan plans to resubmit to the United Nations Security Council a resolution calling for the establishment of a Palestinian state that failed to win enough votes last week. Jordan remains a member of the Security Council while several other countries with revolving membership were replaced over the New Year.

The Palestinians hope these states will be more sympathetic to their resolution demanding an Israeli withdrawal from occupied territories and independence by 2017, although the veto-wielding United States would be all but certain to vote 'No' again, as it did on Dec. 30. 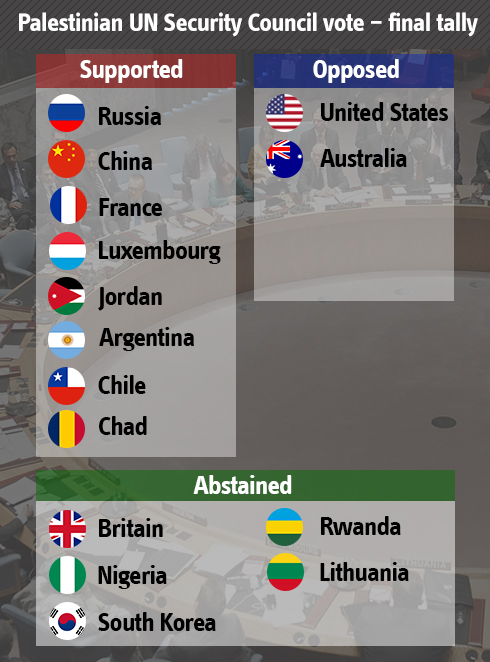 "We are studying it, and we will study this with our allies and especially Jordan ... to submit the resolution again, a third time or even a fourth time."

In the UN vote on Tuesday, the Palestinian draft received eight votes in favor, including France, Russia and China, two against and five abstentions, among them Britain. Australia joined the United States in voting against the measure.

But any resubmission would face almost certain failure. The US has veto power as one of the council's five permanent members and has pledged to block Abbas's plan, calling it one-sided and unproductive. 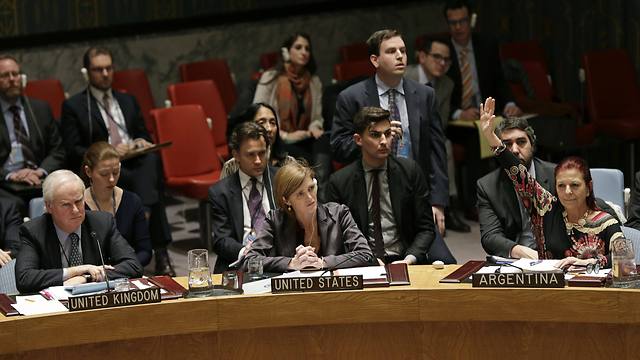 UN Security Council (Photo: EPA)
Abbas signed onto 20 international conventions the next day, including the Rome Statute of the International Criminal Court, giving the court jurisdiction over crimes committed on Palestinian lands and opening up an unprecedented confrontation between the veteran peace negotiator and Israel. In retaliation for the move to the ICC, Israel announced on Saturday that it would withhold 500 million shekels ($125 million) in monthly tax funds that it collects on the Palestinians' behalf, in a blow to Abbas's cash-strapped government. "Now there are sanctions - that's fine. There's an escalation - that's fine ... but we're pushing forward," Abbas said. Earlier Sunday, a legal expert said the first case the Palestinians will refer to the International Criminal Court will be the crimes Israel committed during summer 2014, including the Gaza war, a legal expert said Sunday. Chief Palestinian negotiator Saeb Erakat confirmed Gaza would be one of the cases referred to the court, but also said there would be a file put together on Israeli settlement building in the West Bank, land seized during the 1967 Six-Day War.

"The main files will be the aggression against Gaza and the settlement file, since this is a continuous crime," Erakat said on Sunday.

Israel for its part threatened to take tougher action against the Palestinians over their decision to join the International Criminal Court, a day after freezing the transfer of more than $100 million in tax funds, saying it could take the Palestinians to the court as well.

"We will not let (IDF) soldiers and officers be dragged to the International Criminal Court in The Hague," Prime Minister Netanyahu said Sunday at the start of the weekly cabinet meeting. "Those who should face justice are the heads of the Palestinian Authority who signed a covenant with the war criminals of Hamas," he said.

Reuters, AFP and Attila Somfalvi contributed to this report