Organizers of counter-demonstrations in Berlin, Stuttgart, Cologne and Dresden say rallies are against racism and xenophobia

BERLIN - Thousands of Germans demonstrated in four cities Monday in opposition to the weekly rallies in Dresden against the perceived "Islamization of the West," which have attracted growing numbers of supporters.

Organizers of the demonstrations in Berlin, Stuttgart, Cologne and Dresden said they were rallying against racism and xenophobia to instead promote a message of tolerance.

Businesses, churches, the city Cologne's power company and others were planning to keep their buildings and other facilities dark in solidarity with the demonstrations against the ongoing protests by the group calling itself Patriotic Europeans against the Islamization of the West, or PEGIDA. 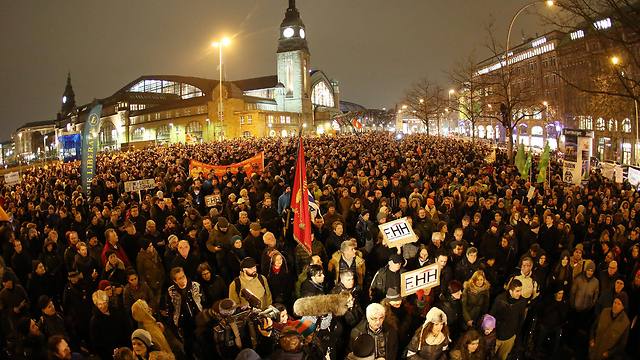 Over the last three months, the crowds at PEGIDA's demonstrations in the eastern city of Dresden, a region that has few immigrants or Muslims, have swelled from a few hundred to 17,500 just before Christmas. Police said a similar number were expected again Monday night.

The group has broadened its appeal by distancing itself from the far-right, saying in its position paper posted on Facebook that it is against "preachers of hate, regardless of what religion" and "radicalism, regardless of whether religiously or politically motivated." 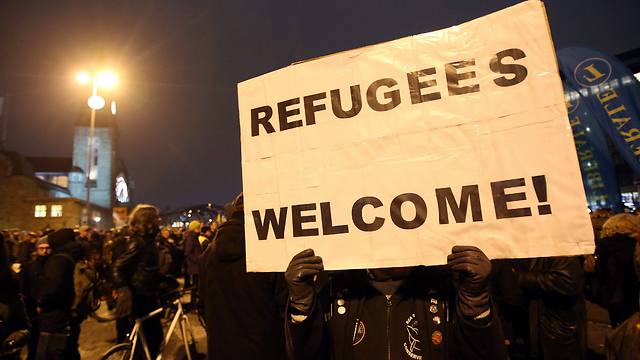 "PEGIDA is for resistance against an anti-woman political ideology that emphasizes violence, but not against integrated Muslims living here," the group said.

It has also banned any neo-Nazi symbols and slogans at its rallies, though critics have noted the praise and support it has received from known neo-Nazi groups.

Main organizer Lutz Bachmann refused to comment further about his party's platform when approached by the AP at a recent rally.

Cem Ozdemir, co-chairman of The Greens party and himself the son of a Turkish immigrant, told n-tv on Monday that while he, too, was against any form of extremism, "intolerance cannot be fought with intolerance."

"The line is not between Christians and Muslims," he said. "The line is between those who are intolerant ... and the others, the majority." 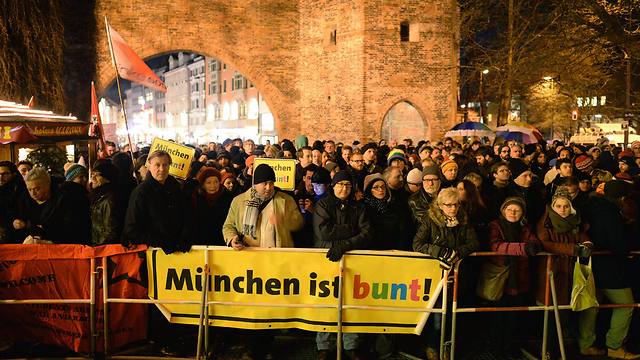 In uncharacteristically frank words in her New Year's address, Chancellor Angela Merkel urged Germans to stay away from the Dresden rallies.

When the PEGIDA demonstrators chant "we are the people," Merkel said "they actually mean 'you don't belong because of your religion or your skin."

The Dresden demonstrations have spawned smaller PEGIDA rallies elsewhere, including gatherings planned in Berlin and Cologne Monday night where several hundred were expected to be on hand. By contrast, some 10,000 counter-demonstrators were expected in Berlin, 2,000 in Cologne and another 5,000 in Stuttgart where there was no PEGIDA protest planned.

The provost of Cologne's famous cathedral, Norbert Feldhoff, said Monday he would keep the building's exterior lights off in an attempt to make the PEGIDA demonstrators think twice about their protest.

"You're taking part in an action that, from its roots and also from speeches, one can see is Nazi-ist, racist and extremist," he said on n-tv. "And you're supporting people you really don't want to support."

Cologne City Hall, and several other churches and historical buildings later said they would also keep the lights off, and electric company Rhein-Energie said it would keep the city's bridges dark, the dpa news agency reported.

In Dresden, automaker Volkswagen said it was also keeping its glass-walled manufacturing plant dark, to underscore the company "stands for an open, free and democratic society."